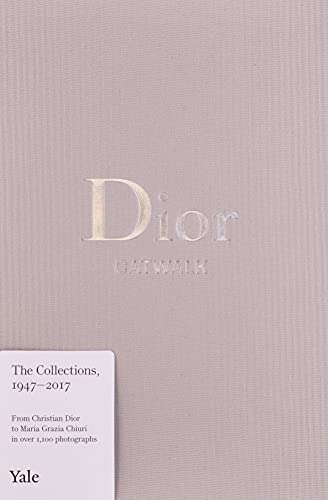 The idea that there couldn’t possibly be another book focused on maison Christian Dior has been shattered in grand style with the release of  Dior: The Collections.

As of March 2017 when reviewing Dior by Christian Dior this reviewer concluded that this title might be the last of the monographs devoted to the topic but now, much to my shock and utter delight, Dior: The Collections arrives and is conceivably  the quintessential volume on Dior haute couture and its illustrious history. Consider this title to be the encyclopedia of Dior with a cast of mostly legendary designers who have had the privilege of designing for this heritage brand since its birth.

“The true fashion moment is much mythologized, but seldom encountered. Despite the fashion industry’s assertions to the contrary, there have been few.” —Alexander Fury

Alexander Fury has perhaps written one of the most insightful, intelligent, eloquent and detailed appraisals and assessments of all that was Dior haute couture—each designer, each collection, and each era. The introduction and text are head and shoulders above any before, especially when dealing with a singular brand or designer. What is confounding is that regardless of the superlative content and style with which it is written, there is nothing to prepare you for the visual and informational onslaught that lies within this epic 632-page tome.

While staying on the text aspect, Fury cites and quotes “notes” from the designers with regard to each collection. At the onset, Dior himself wrote the “notes” which were more or less the rasion d’etre for each collection. The practice was followed by YSL but in the passage of time has morphed into a press release which is more or less some high minded pseudo-intellectual babble or inspiration that talks around but never actually addresses the latest collection. From Dior through the time of Galliano, these were times when designers still designed and before hype took over and superseded talent.

Keep in mind that if a coffee table picture book is what you have in mind then you might want to move on as this is a book that insists on revisitation given the wealth of details provided for each collection. The astounding pictorial representations are beyond the pale as is the research and care involved that is so evident in an almost unrivaled caliber within the genre. Consider this book to be part educational, part textbook and most of all encyclopedic when it comes to the world of Christian Dior haute couture.

This book is for the discerning fashion enthusiast who will keep it and return to it time after time for either reference or just the sheer brilliance of those who have helmed the brand’s haute couture. Objectively speaking this is a gotta have, must own essential for the newer fashion enthusiasts and designers as well as the most jaded of all fashion readers.

“Haute couture is not an answer to everyday dressing but the echo of our dreams and our intuitive, out-of-the-ordinary visions . . .”
—Gianfranco Ferre