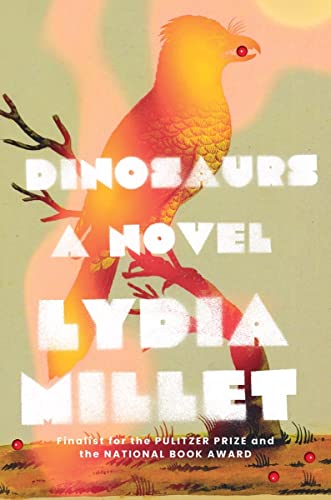 “The book desperately wants to convey its message of human connectedness with all the species that share this planet. Gil walks 2,400 miles to appreciate and then deliver this message. But he needs to prove more clearly that he cares . . .”

In interviews, the veteran author and environmentalist Lydia Millet has been quoted as emphasizing the urgent need to take action, not just bemoan global threats like climate change. Yet in her newest novel, Dinosaurs, there is almost no action. Hints that in most other novels would burgeon into full-fledged plotlines—a possible adulterous affair, a possible confrontation with a bully, a possible shooting—quickly peter out.

The main character, a superrich, middle-aged ex-New Yorker named Gil, is nice, passive, well-meaning, and not particularly introspective. So, by and large, are the people in his life. Even the quasi-villains turn out to be paper threats.

Buried within all the niceness is an important cri de coeur urging readers to find their common humanity and work together to halt the degradation of the Earth, epitomized by the looming extinction of some of the Arizona bird species that Gil has been closely watching.

All this makes for a basically boring albeit earnest book, weighed down by a pretentiously terse style.

For instance, here’s how Millet concludes one of the numerous short sections that make up her chapters:

“Just before sunrise you could walk out and see the massive birds in their great numbers, before they took off.

Why does “into the firmament” need its own dramatic paragraph?

As the book begins, in November 2016, Gil is abandoning his life in Manhattan, because he has just been dumped by his longtime girlfriend. Thanks to the fortune he inherited as a young boy after his parents were killed by a drunk driver, he’s never had a paying job, except for a brief bartending stint, and doesn’t have to worry about finding one now. He chooses Arizona as his new home, based solely on “some drone footage he’d seen.”

In what’s probably the most daring act he’s ever undertaken, Gil decides to walk the entire 2,400 miles from New York City to Phoenix. However, it’s sadly typical of Dinosaurs that this unusual journey, which could have been rich in anecdotes, sensory impressions, and self-revelations, is disposed of in less than three pages, with a barebones itinerary. “He rested whenever his legs or back were aching—an ache that got less acute after the first couple of weeks—and stayed in motels when he could find them.”

Once Gil arrives in Phoenix, he glides easily with the air currents, like his beloved local birds. The family next door immediately become close friends. Gil has never had children himself, but he instinctively knows exactly what to say to the bored 10-year-old son. He volunteers at a local women’s shelter—although he’s almost turned down for being “fairly attractive”—and falls into a comfortable romance with a smart, caring surgeon.

His reactions to most things, whether it’s a beer with the next-door dad or evidence that a bigger kid is physically bullying the 10-year-old, are uniformly flat. (Also, he manages to end the bullying pretty much as soon as he learns of it.)

There’s a smattering of stunning moments when Millet, the author, shows how powerful understatement can be. After he learns a few details regarding his parents’ deaths—that his mother was wearing a long blue skirt, that a No Parking sign smashed onto them—Gil is haunted by “a figment [that] trembled at the edge of his sight, a long panel of blue and above it an angular weapon of dull-gray metal. Rectangular white and red.”

The book desperately wants to convey its message of human connectedness with all the species that share this planet. Gil walks 2,400 miles to appreciate and then deliver this message. But he needs to prove more clearly that he cares—about anything.