Dinner at the Center of the Earth: A novel 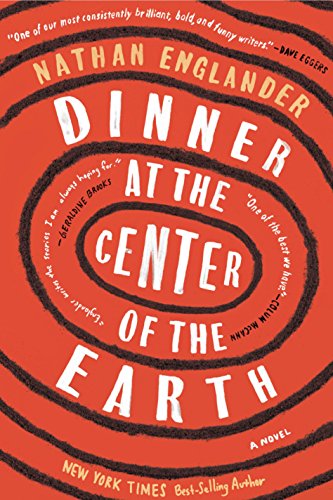 "uneven as a work of literature, but its ideas are worth engaging."

In a New York Times interview Nathan Englander describes his second novel, Dinner at the Center of the Earth, as having “a Turducken of a structure: it’s a literary novel inside a spy thriller that’s inside a love story—a love story that’s tucked inside an allegory.” Despite Englander’s spare prose his fragmented, non-linear spy narrative is too slow paced and unsuspenseful to qualify as a thriller. The love story is more symbolic than romantically convincing, so if it succeeds at all as a literary novel it is as an allegorical lament for the failure of the Israeli-Palestinian peace process.

Readers who enjoyed Englander’s character centered two books of short stories For the Relief of Unbearable Urges and What We Talk About When We Talk About Anne Frank (also reviewed in NYJB) and his previous novel The Ministry of Special Cases, in which the plot subjects the characters to events that test and reveal their strengths and weaknesses, are hereby warned that the new book is largely plot based. Indeed many characters in his short stories are more fully developed than those in Dinner at the Center of the Earth, and its plot is initially presented in slivers and conveyed in uneven prose.

The chapters alternate between 2002 in Paris and Berlin and 2014 in a secret prison in Israel’s Negev desert and in a hospital room near Tel-Aviv. In 2002 Z is a American Israeli Mossad agent and traitor who is romancing a Parisian waitress and trying to evade and escape his colleagues who he fears will either kill or abduct him, while in Berlin Farid is a Palestinian businessman raising funds for a terrorist organization in Gaza whose role in the novel cannot be further revealed without spoiling the plot.

In 2014 Israel and Hamas are fighting a war in Gaza, and Z has been Prisoner Z for the past dozen years. His existence is top secret, and the only people aware of his imprisonment without trial or due process are the guard who keeps him company and with whom he plays backgammon, the colleagues who captured him and their commanding officers, and the man referred to only as The General but is clearly Ariel Sharon, who was Prime Minister a dozen years earlier and for the past eight years has been hospitalized in a coma caused by a stroke.

In his comatose state The General reminisces about the controversies that highlighted his career, including the 1953 disproportional reprisal raid he led in Qibya after which Generals Moshe Dayan and Yitzhak Rabin shake their heads in disapproval and won’t make eye contact with him. Prime Minister David Ben Gurion tells The General (who at the time was a major), “I still can’t tell if having you will be for this nation a blessing or a curse. Not since Bar Kokhba came popping out of his tunnels to bloody the Romans have we had one man who can do so much harm.”

But then Ben Gurion tells him “The world hates us, and always has. They kill us, and always will. But you, you raise up the price.” The prime minister concludes by telling his young officer that he was “put here solely to raise the bounty hung on the Jewish head. Make it expensive. Make it a rare and fine delicacy for those with a taste for Jewish blood.”

Englander, however, takes a dim view of cycles of reprisal, and has The General recall reversing course half a century later by endorsing a two state solution and unilaterally withdrawing from Gaza. In chapter titles The General’s comatose state is referred to as “limbo,” a term that might also describe Prisoner Z’s secret lifelong imprisonment and the moribund peace process.

Can an intelligence agency secretly hold someone prisoner in a democracy? Yes. In the NYT interview Englander relates that his fictional Prisoner Z is based on Prisoner X, Australian-Israeli former Mossad agent Ben Zygler whose imprisonment only was revealed after he committed suicide in a maximum security prison cell in 2010.

Z’s treason is motivated by empathy for enemy civilians, collateral casualties of a successful IDF destruction of a Gaza bomb factory during the Second Intifada when large numbers of Israeli civilians were being blown up by suicide bombers. It is not surprising that The General insisted on Z’s continued secret incarceration.

In the second half of the book after Z is returned to Israel Englander’s prose becomes richer, and the novel’s pace picks up. One of the officers who assisted in Z’s capture leaves the Mossad and joins Prime Minister Olmert’s diplomatic team in the 2008 peace negotiations with Palestinian President Mahmoud Abbas and falls in love with a member of the Palestinian delegation referred to as The Map Maker.

The two lovers meet clandestinely during brief trysts in foreign cities and at home talk on the phone, but the impossibility of their relationship developing further is a metaphor for the impasse between their governments.

The novel blames the failure of the 2008 negotiations on Abbas, and in one of The General’s comatose recollections an earlier secret negotiation with Abbas’ predecessor Yassir Arafat ends over one minor symbolic condition.

The books’ characters agree that no progress toward peace is likely as long as Benjamin Netanyahu is prime minister. If right-wing Israelis and their overseas supporters read the book they will probably find an alternative allegory, one in which Z represents traitorous liberals who care more about the wellbeing of the enemy than the security of fellow Israelis.

In the book’s acknowledgements Englander thanks his editor for extracting the text of the novel from a much longer manuscript. The salvage operation feels uneven as a work of literature, but its ideas are worth engaging.