DIGNITY: In Honor of the the Rights of Indigenous Peoples, Updated Second Edition 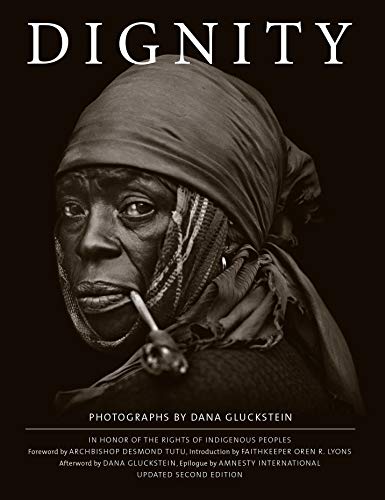 For three decades photographer Dana Gluckstein has been documenting the lives of indigenous nations. The second edition of Dignity is a stunning collection, a companion edition to her 2011 international portraiture gallery exhibitions.

The layout is beautiful in this volume with full-size black and whites on exquisite plates. The portraits bring awareness at this volatile time as global tensions escalate and geopolitical cooperation continues to erode the impact on indigenous populations of the world, leaving them even more at risk.

Gluckstein has collaborated with Amnesty International and other global humanitarian organizations to bring awareness to the humanitarian crisis of marginalized, oppressed populations.

In his Foreword to the book, Archbishop Desmond Tutu describes the essence of her portraiture as being not “just the physical form, but also the luminous soul that shines through us.”

An essay by Oren R. Lyons, Faithhealer of the Turtle Clan, Onondaga Nation, (United States) also weighs in on the importance of this photo collection in the fight for human rights. Lyons writes for the Indigenous Peoples of the world that started collectively in 1977 when 146 delegates from Indigenous populations traveled to a United Nations assembly in Geneva to seek “justice for centuries of unspeakable crimes against our peoples.”

The mission is to “dispel myths” and reveal the realities of their lives apart from political and religious regimes that have ignored, destroyed, and oppressed their culture, heritage, and customs.

The text contextualizes the humanitarian issues, and it is Gluckstein’s artistic lens that illustrates the dignity of all of her subjects. They are making statements of their own collaborating with this artist to show their strength and resilience and their inviolate dignity. These portraits are, distinctly, not voyeuristic on hidden societies, or exploitative in any way.

An understanding beyond words captured in the physicality of a dancer-chanter in Hawaii, whose anguished expression speaks volumes. The Two Njemps girlfriends in Kenya in 1985, in torn clothing, dirty from work and clinging to each other. A young dancer of the Oaxaca, Mexico, resplendent in the ceremonial tribal clothes.  A Masai Warrior initiate in Kenya stepping into her headdress shield and tribal armor of branches and earthen fabrics. A group of Berber Schoolgirls in the High Atlas Mountains of Morocco in 2016 banded together 2009 in hope and despair.  A family portrait of three generations of Botswana women posing together, their head scarfs, beads, and outfits symbolic of their lives. A Haitian Granary worker in 1983, looking stunningly beautiful in her textured paisley patterned dress.

It is a document that should be part of any discussions of “sovereignty” or “globalization” as nations ignore climate change, the rise of dictatorships, and the ascendance of fascist and authoritarian regimes that grab power, land, and resources.

Gluckstein uses her art to represent and embody the voices of the unheard, most vulnerable populations of the world, writing “the Dignity book and associated museum exhibition serve as a critical call to action in support of Indigenous Peoples.”

United Nations Declaration on the Rights of Indigenous Peoples is reprinted in the book. The document’s 46 articles detail the necessary global initiatives for all people, and recognize, protect, respect the sovereignty of indigenous peoples and their inviolate humanity. Margaret Huang, Executive Director of Amnesty International USA, observes “glorious images reveal a deep collaboration between photographer and subject, as if they had made a pact to suspend time so that we, the viewers, could contemplate the full import of the Declaration.”