A Difficult Woman: The Challenging Life and Times of Lillian Hellman 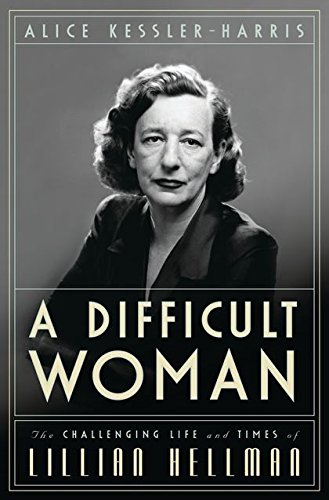 “The reader doesn’t read this book, but experiences it. Ms. Kessler-Harris could have employed any other adjective in her title, but clearly, Lillian Hellman was A Difficult Woman.”

Alice Kessler-Harris carefully analyzes Lillian Hellman’s life by parsing it on a variety of levels. She opens with the typical biography data relating to her subject’s early life and family experiences, but quickly picks apart her subject’s adult life as an independent woman in her work, love, and politics.

Ms. Kessler-Harris scrutinizes Hellman’s plays as they relate to her deep convictions about human liberty. Critics loved her work or hated her work but were seldom ambivalent about it. And Hellman did not sit idly by and tolerate the negative. She responded in kind to attacks—sometimes on a curious level, not understanding how her critics could not see how she came to her themes or why they needed explanation. But explain she did.

One of the most interesting themes that wanders through A Difficult Woman is that of Hellman’s numerous sexual relationships with a variety of men, but most important was her ongoing and complex relationship with author Dashiell Hammett. She relied upon his input as she worked through her plays and took his comments seriously. She supported him physically, mentally, and financially through the end of his life—and even after—as she managed his estate for his daughters.

Her own financial concerns seemed to worry her on a neverending basis, but as Ms. Kessler-Harris points out, Hellman made a point of studying her finances, questioning her managers, and making astute decisions that benefited her in the long run.

She left no stone unturned when it came to her own financial security. As a woman working in a then, man’s world, she became a ‘tough broad’ and relished the role of independence in all things Hellman.

In her chapter titled “A Known Communist,” Ms. Kessler-Harris describes Hellman’s relationships with other entertainment celebrities who experienced different levels of affiliation with the CPUSA (Communist Party of the United States of America) and who faced retribution by HUAC (the House Un-American Activities Committee).

The details in this chapter are enlightening about both the era itself, and Hellman’s political beliefs. She condemned capitalism in her plays, focusing on how this form of economy destroyed anything that lay in its path. Although facing HUAC testimony in the early 1950s regarding her role in the Communist Party, she railed loud and clear about “fear” of speaking out being the writer’s enemy.

She never backed down from her “. . . efforts as reaching for moral rather than political truths” in her writing. Although her official membership in the Communist Party lasted only about a year in the late 1930s, her involvement with organizations with communist leanings, or so described by the government, extended through a number of decades. She made several trips to Russia, which were followed closely and reported on by the FBI.

One of the final chapters of the book is titled “Liar, Liar” and focuses on how she used lies both in fact and fiction. In fiction, many of her plays have a lie as the basis of the story; many people, after her death, questioned how many lies she wove around her own life.

Hellman did not see herself as a liar but rather as a person with a poor memory, a storyteller. Truth was a fact that seemed to elude her throughout her life, resulting in someone who reinvented herself many times over.

As is frequently the case, the end of a person’s life is as interesting as the path to that end. Such is the case as described by Kessler-Harris. Through the strokes and illnesses that finally took her life, Hellman remained an irascible character. Many friends and acquaintances recall the contradictions of her life, where she could be angry one moment yet always “. . . retained her capacity for fun—the continuing wicked humor . . .” and even through her rages, her vanity and pride remained at the forefront.

In the aftermath of her death, her critics kept her character flaws alive, using them to castigate her and attempting to smirch her memory. Her life seemed to take on a life of its own as people recalled her false tales, her leftist leanings, her sexuality; and yet regardless of what many saw as deeply ingrained facets of a strong personality—with both positive and negative characteristics—Lillian Hellman survives the criticism.

Choosing the proper adjective to describe Lillian Hellman is definitely a challenge. As one reads this book and digests the many nooks and crannies of this woman’s life, words such as generous, biased, demanding, needy, perceptive, insecure, and deceptive all present themselves at one point or another.

The reader doesn’t read this book, but experiences it. Ms. Kessler-Harris could have employed any other adjective in her title, but clearly, Lillian Hellman was A Difficult Woman.