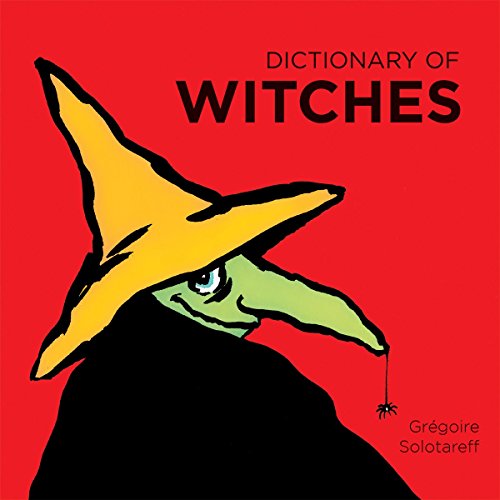 “a delightful book, guaranteed to promote snickers, chuckles, and a guffaw or two.”

No doubt most members of the reading public had their childhoods filled with tales of magical beings: fairies, unicorns, goblins, and witches. Surely those same child-readers also had questions about the latter.

This dictionary strives to answer many of those queries by defining various words associated with witches. Several offer enlightening information on the origin of a word and its actual meaning. Others are concerned with witches’ personal and social lives, their pets, and what they wear and eat. None are very serious, but all are amusing.

The table of contents covers five pages, topics listed in alphabetical order, from “Abracadabra” to “Young.”

A stroll through the pages offers these definitions (all given with tongue firmly imprisoned in cheek):

COLOR: Witches do not consider black a color, which is false but witches aren’t artists so they should keep quiet on the subject.

HAZEL: Witches’ eyes are often hazel. In other words, they are not brown, not blue, not green. When we talk of witches having hazel eyes, you will understand the meaning of “witch hazel.”

HAIRDO: Contrary to what you might think, witches do style their hair, but they style it with a broom and not a brush which gives it that trademark color and the impression it isn’t styled at all.

MUSLIN: The fabric from which witches’ hats are made. It is usually purple. It’s also the name of a very nice dragon-tailed fairy that is unfortunately now extinct.

POOR: When you see a cat and think “Oh, poor cat,” you should ask yourself if it is a witch’s cat, because they only act unhappy so they will be well fed and allowed to do as they please.

STUPID: If someone steals your vacuum from your closet, be sure a stupid witch did it because she thought vacuums had replaced brooms. NOTE: This appliance has no chance of flying.

WHITE: Young witches who are rather slim put white sheets over their heads and fly around without their brooms. They call themselves “ghosts.”

The dictionary also answers questions that have plagued people for centuries:

WHAT IS A WITCH’S HUSBAND CALLED? Answer: Mister Witch

WHO ARE A WITCH’S BEST FRIENDS? Answer: They are called Xanthia and you’ve seen them without knowing it (they are a bit like people passing you on the street). They are little light brown moths who are very nice and friendly.

WHY DO WITCHES HAVE BLACK CATS? Answer: The truth is that witches never have black cats. The black cats have the witches, whom they visit from time to time.

WHO IS A WITCH’S MAIN RIVAL? Answer: The Big Bad Wolf. He scares children and never makes them laugh and that is why witches and the Big Bad Wolf often fight.

There are also some tasty (?) recipes that should be tried with extreme prejudice:

A SNACK RECIPE FOR WITCHES

There are also instructions for preparing Christmas Dinner, which is best avoided unless preceded by a large dose of antacid tablets.

All in all, this is a delightful book, guaranteed to promote snickers, chuckles, and a guffaw or two, profusely and cleverly illustrated from cover to cover.  Inspired by the Russian fables of author Solotareff’s childhood, it will entertain both curious older children as well as satirically minded adults.