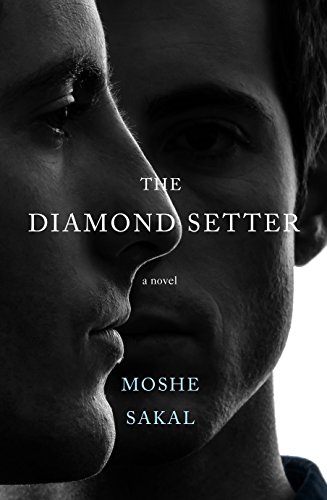 The Diamond Setter, Moshe Sakal’s fifth novel, his most autobiographical and the first translated into English, addresses themes of immigration, displacement, and identity via alternating interwoven narratives that take place in Tel Aviv-Jaffa in 2011 and in Damascus, Lebanon, and Yafo (the transliteration of the Arabic name of Jaffa) in the 1940s via Jewish-Arab polyamorous triads in both eras, and a cursed diamond whose backstory originates in 18th century India, based in part on actual events.

In 2008 Sakal, who had already published his first three novels, began a three-year apprenticeship as a jewelry craftsman in the jewelry store his father inherited from his father and Moshe’s namesake, who opened the store shortly after immigrating from Syria in 1949. In that store Moshe the novelist got the idea for a novel in which a gemstone would traverse centuries, countries, and families in the manner of the Sarajevo Haggadah in Geraldine Brooke’s The People of the Book or the desk in Nicole Krauss’ Great House.

In 2011, during an anti-Israeli demonstration by Palestinian-Syrians near the Syrian-Israeli border in the Golan Heights, 28-year-old demonstrator Hassan Hijazi crossed into Israel and traveled to central Israel to see the village his grandparents left in 1948. That true incident gave Sakal another central plot element.

The novel’s second chapter opens in 2011 with Fareed, a 28-year-old Palestinian-Syrian, crossing into Israel and traveling by public transportation to Jaffa—his grandparents’ home before their trip to Damascus shortly before the outbreak of war in 1948 and to which they were subsequently unable to return—where he hopes to return a diamond his grandmother took with her to its rightful owner. Fareed is far less politically engaged than Hijazi. He’s also gay, and shortly after arriving in Jaffa and finding a place to stay he downloads and opens Grindr, a GPS enabled gay cruising app that shows where other users are located in one’s immediate vicinity.

The first Israeli man with whom Fareed connects on Grindr introduces him to Honi, a soldier who is a reporter and producer for Army Radio, who in turn introduces Fareed to his boyfriend Tom, who works in the jewelry store his uncle Menashe inherited from Tom’s grandfather Rafael, who leased the store from his Damascene childhood friend Shayu (Honi’s grandfather) located on the ground floor of a building now owned by Honi’s father Amiram Kadosh, who wants to evict Menashe and turn the building into a boutique hotel.

If the relationships related in the previous sentence are reminiscent of the Passover song “Had Gadya” there is indeed a middle eastern quality to the way Sakal’s characters and plot lines are interlaced. A century earlier back in Damascus Tom and Honi’s families were distantly related.

Tom, Honi, and Fareed form a romantic triad that mirrors a previous polyamorous triad from the years immediately following World War II comprising Rafael, his wife Adela, and Fareed’s grandmother Layla, an Palestinian Arab resident of Yafo who met the Damascene Jewish couple at a vacation resort in Aley, Lebanon, when travel between the respective countries was still permitted. It was there the last time the three met that Rafael and Adela gave Layla the Blue Diamond whose Arabic name is Sabakh.

The Sabakh’s curse originated in its theft from a statue in a Hindu temple by an 18th century French soldier from whom it passed into the possession of the royal families of France, England, and Turkey. To thwart the curse the Turkish sultan had the diamond cut into two and gave one of the stones to Rafael’s aunt Gracia, an Arabic chanteuse and courtesan of whom the sultan was enamored.

In 2011 Menashe and Amiram have no problem with their sons’ sexuality and relationship, but they don’t know about their sons’ relationship with Fareed. Menashe is portrayed as the exemplary ethical artisan and tradesman while Amiram is portrayed as a stereotypical greedy businessman. Unlike his father, Honi is an idealist who lobbies his editor to allow him to cover the social protest movement that in the summer of 2011 spilled over from the Arab Spring in neighboring countries and anticipated America’s Occupy Wall Street demonstrations that autumn.

All three generations of all three families were/are economically privileged. In 1948 Layla and her new husband Abed would travel to Damascus to escape the violence that erupted in Jaffa, and in 1949 Rafael and Adela would buy an apartment in Tel Aviv and move there after finding themselves excluded from economic life in an increasingly anti-Semitic Syria.

The two families represent the larger population exchange that occurred in the Middle East at the time in which 700,000 Palestinians found new homes in neighboring Arab countries while 900,000 Jews from majority Muslim countries moved to Israel, not unlike population exchanges that occurred after the 1947 partition of the subcontinent into India and Pakistan and that which occurred between Greece and Turkey in the early 1920s.

When Fareed was 19 and Layla was 85 he asked her if she was angry, to which she replied,

“At who? The Zionists? No, I’m not angry.” She thinks to herself how she and Abed “had managed to integrate in Damascus over the years, thanks to family connections and Abed’s flourishing career.”

In Jaffa nine years later Fareed writes “I look at this house I’m in now, my grandparents’ house, and I really don’t feel I belong in it. I don’t miss it and I don’t belong. Still, this is my city, this is my family’s house, this is the sea my grandmother looked at for many days.”

It makes sense that displacement would be less harsh for the affluent, but it would be naive of readers to think that Layla and Fareed’s equanimity reflects Palestinian sentiment in general.

After he was apprehended the real life Palestinian-Syrian infiltrator Hijazi said he hoped Israel would be replaced by a majority Muslim country with a Jewish minority, which probably more accurately represents Palestinian diaspora opinion than Sakal’s fictional Palestinian characters.

On the other hand, reading the Blue Diamond and its curse as emblematic of colonial plunder and its ongoing repercussions seems like more baggage than any one metaphor can carry elegantly. Indeed, the novel has an undercurrent of nostalgia for a time when Jews and Arabs interacted as equal subjects of foreign empires.

The Diamond Setter features a very large cast of characters who can be difficult to keep track of. To this end, the author has included a list of characters at the beginning of the book.

The book is well written, masterfully translated by Jessica Cohen, and rewards rereading.