Dewey's Nine Lives: The Legacy of the Small-Town Library Cat Who Inspired Millions 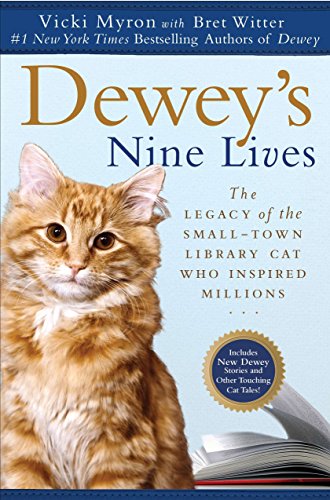 A sequel to Dewey: The Small Town Library Cat Who Touched the World, this book is reminiscent of the Chicken Soup for the Soul series. Ms. Myron and Mr. Witter incorporate different anecdotes about felines who touch their owners’ hearts much in the way that Dewey Readmore Books did for Vicki and the town of Spencer, Iowa.

The tiny, half-frozen, and abandoned feline who moved the lives of those he encountered and those who read about him, Dewey encouraged other cat lovers to tell Ms. Myron their tales, allowing her to share nine stories with the world. Similar to Dewey in many ways, these felines reflect the way cats can sense when they are needed, and how they give unfailing and unconditional love, especially to the humans who rescue them from near death, sickness, neglect, or desertion.

Bill, also from Michigan, shared his poignant story. Growing up on a farm and loving nature, he had an affinity for all living things, but after serving in the Vietnam war, he suffered torment from all he had witnessed and endured. It all took a toll on him; he started drinking and could not stay in one place or commit to a relationship. Then Spooky, a coal-back kitten, dropped into his life . . . quite literally. Plummeting from above, he fell on Bill’s car, which Bill later learned was due to being captured and released by an owl. Nurturer that he was, Bill rushed the badly injured feline to the vet, offering to pay any amount of money to save its life. It was touch and go, but Spooky proved to be a survivor. Not only had Bill saved his life, but he in turn, saved Bill’s with his subsequent love and devotion.

Glenn, an Iowa hard working “man’s man” wanted nothing more than to be married and have children. His dream came true when he married young, and his wife produced three children whom Glenn loved fiercely. Then his wife wanted out, and Glenn lost everything. His second marriage proved just as disastrous. Glenn thought he would never find anyone to love. After his second divorce, he worked, helped others, and refurbished an old car. When an orange tabby happened along and decided to adopt him, it was just when Glenn needed him.

These stories along with the others will touch the reader’s heart. Be sure there are plenty of tissues handy. Some of these compelling tales cannot help but cause tears, while confirming that the bond between human and animals is impenetrable.