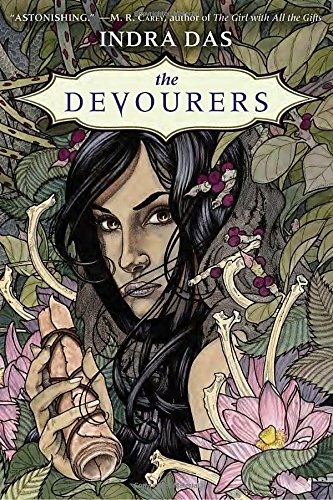 It takes skill for an old horror trope to take on new life. With a fresh spin on the shapechanger myth, The Devourers is the multilayered and engrossing tale of Alok, a history professor in the midst of his own personal turmoil and under the enchantment of a man he calls simply “the stranger.” The stranger tells Alok terrible, beautiful tales that cannot possibly be true. Throughout the beginning chapters, Alok vacillates between the stranger being either a madman or exactly what he claims—a half-werewolf shapeshifter, near immortal capable of terrible violence. Either way, Alok finds himself drawn to the beautiful stranger.

The sense of place in The Devourers is perhaps the strongest element in the book. The author creates a textured setting that bursts cinematically from the page, the language beautifully woven and engrossing. The almost stream-of-consciousness descriptions and action sequences might be tiresome to some readers, but for those who appreciate artful use of language, they will find the author’s well-wrought descriptions delightful. Readers that prefer more Spartan prose might lose momentum with the novel and find it tedious.

The Devourers is a tale within a tale, intertwined with care. The stranger employs the professor to type out the translated text of two scrolls, a two-part tale told by Fenrir, a Norse shapeshifter that thirsts after human love, and Cyrah, a beautiful, fierce Bengali woman who becomes a victim of Fenrir’s brutal form of adoration. Their identities become obvious from the beginning, but understanding their fate and how it relates to the stranger and Alok’s partnership is indeed a dance, one that Indra Das writes with strength and beauty.

Themes are heavy, yet nuanced and subtle to avoid crossing into overbearing or preachy. Fenrir’s love for Cyrah is seen as forbidden and unnatural by their tribes. Alok’s own inner turmoil, and his relationship with other men at the cost of his relationship with his fiancée, is seen as unnatural to his parents who have stopped speaking to him. Alok is shown disdain by dangerous men who do not approve of his romance with the stranger and treat them both as less than human, just as the shapeshifters hunt and devour the souls of their prey, who they see as bleating khrissals no more important than sheep.

Although there is a lot of sex in this novel, it is not meant to be erotica. The sex is not written to be titillating, but rather to enhance the themes. Cyrah describes the shapeshifters as seeing her as merely “meat to sink his teeth into, to chew up and swallow and shit out.” Not exactly a romantic vision, yet that’s what makes The Devourers so powerful—the brutal honesty in the way the author writes his monsters. The beasts see humans as food, meant for sustenance only. Yet isn’t that how some men see women: as flesh meant for pleasure only?

Cyrah’s lack of fear at the violence of both men and beast and her courage in the face of death are an attraction to Fenrir. Yet this is only because her interactions with real human monsters have left her numb. Cyrah’s strength of character in the face of death is a startling revelation to both shapeshifters and a curiosity that neither can resist. Neither understands that Fenrir has doomed Cyrah to a fate worse than death, to watch her child suffer at the hands of the same men who have treated her as less than human from the time she was born a female in a patriarchal society.

It would be an insult to review The Devourers and not mention the elephant in the room. It is difficult to pull off a rape scene in a novel and have it not be an ill-used and lazy device, but Indra Das treats the subject with care. Trigger warnings might be required. However, the author notes in his acknowledgements that he wishes to have sexual abuse victims who feel offended to reach out to him so that he can “do better.” That level of author integrity is admirable.

Just as erotica is not the focus of this novel, neither is romantic love. Fenrir’s desire to create life rather than destroy it, to go against the laws of his tribe and accept his status as an outcast in a quest to understand human love, creates a story that is more multilayered than victim and prey, human or monster. Not once, however, was there confusion that Cyrah and Fenrir are truly in love with one another. Readers looking for a satisfying conclusion to any romance in this novel will be left wanting.

The character interaction and multiple point of view and timelines are well done, but what is a larger strength is how the author tricks the reader into underestimating his characters to surprising and delightful results. Cyrah is the most vulnerable character on the surface only. Her courage, intuition, and intelligence give her depth that carries the reader to a conclusion that is more than satisfying, despite the lack of happy romances.