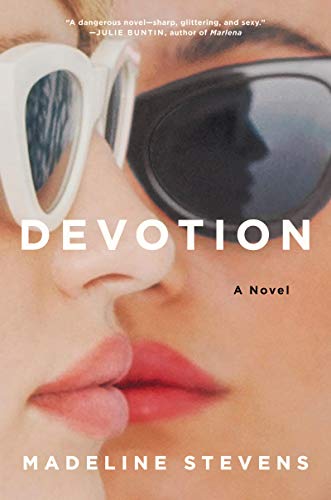 “the writing is sharp and occasionally witty in Devotion, and each word demands to be devoured as the pages are turned steadily until the end. And then it demands thought.”

Madeline Stevens’ debut novel Devotion is a page-turner. This psychological thriller has all the ingredients to create a tense situation rife with obsession, jealousy, lust, and betrayal.

When 26-year-old Ella gets a job as a nanny to a rich family she is ecstatic; she had been surviving on coffee and prepackaged pastries for weeks: “My reflection . . . had dark circles under the eyes, thinned-out cheeks. . . . I could feel the hip bones showing through the skin.”

On her first day, Ella dithers over which door to enter, much like Jane Eyre’s discomfort over the in-between status of a governess who is neither a servant nor an equal: “going up the stoop and through the arched double doors of the main entrance seemed presumptuous, and entering through the ground level, servile.” However, her reception is immediately warm and accepting.

In their first conversation Lonnie tells Ella to eat what she wants and do what she wants with her new baby charge, while Ella calculates “how much cash I could reasonably take from the cigar box, how much food from the cupboards.” This difference reflects their backgrounds; apart from their identical age, the two women come from different worlds. Ella has no money, no friends, and chooses lovers on the basis of a good meal. Lonnie is rich, beautiful, with two men passionately in love with her.

Within weeks Ella has established a bond with the baby William and is on friendly, seemingly equal terms with his mother, spending so much time at their house that it gradually becomes “more familiar to me than my own austere apartment.”

Within the first few chapters, hints of a relationship that threatens the boundaries of normalcy abound, with Ella quoting chunks from Lonnie’s diaries as “the only way I can hold on to her.” As their intimacy deepens, they share food, clothes, and even identities. Ella’s passion for her beautiful employee grows as she rifles through her life. Throw into the mix an equally obsessed husband and lover, and the familiar love triangle morphs into a square.

Narrated in the first person, the book has Ella relating the process of her growing obsession almost dispassionately, resulting in a lack of emotional attachment to the character that is exacerbated by her snooping and stealing. While the well-written, pithy dialogue keeps us interested in the characters, it is hard to become invested in them; perhaps that is the point.

Three of the main characters are in love with the fourth. Lonnie’s beauty is worshipped throughout the story, despite the seeming lack of other remarkable characteristics. She seems carelessly affectionate with her son, insufficiently grateful for her privileged life, contributing little to the greater good. Her father describes her as a “clumsy, spiteful, directionless embarrassment . . . weak character, no self-control, no discipline.” Is there a message here about society’s fascination for beauty?

The story builds slowly but tensely to the climax. For almost 300 pages readers run the gamut of suspense about what will happen. Will Ella develop unnatural maternal instincts for the baby? Will she insinuate herself first sexually, then wholly, into Lonnie’s life, perhaps taking over her identity completely?

The climax, when it comes, is anti-climactic, a scene of shared degradation toward the object of mutual obsession. Not intended degradation, more a physical onslaught in a desperate attempt to evoke a response.

However, as one ponders it further, the fact that this episode changed the courses of lives, despite its seeming tameness, it leads one to ponder whether the author intended something more subtle. A #MeToo moment, instigated by a woman.

What is certain is this, the writing is sharp and occasionally witty in Devotion, and each word demands to be devoured as the pages are turned steadily until the end. And then it demands thought. It will be interesting to see what Madeline Stevens produces next.