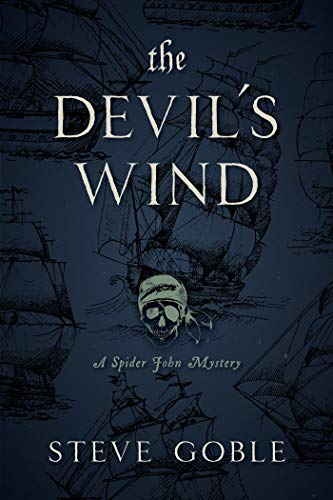 “Readers will thoroughly enjoy this rollicking tale of bold pirates, brave men, and women also handy with a cutlass, combined with the classic ‘locked room’ mystery”

Spider John has found work as carpenter aboard the Redemption, bound for Boston and home, and he’s looking forward to being law-abiding for the length of the voyage.

With shipmates Hobgoblin and Odin, all John wants to do is carpentry work aboard ship and never hear of pirates again. That won’t be the case, of course, for no sooner have the passengers boarded than Odin sees a face he’d rather not.

Spider looked and saw four men leaning against the starboard rail. ‘Which one?’

“Fellow with the pipe and the brimstone vapors sailing about his head.”

‘You sailed with him?’

“Aye,’ Odin said. “We called him Sam Smoke. With him and Wicked Pete Reese and one worse.’

“Ned Low.’ Odin sucked hard at his pipe held the smoke in his lungs and blew out a monstrous fog. “We all sailed with Ned Low.’”

Keeping an eye on Sam Smoke and not letting him find out isn’t easy, but there are other passengers attracting Spider’s attention. There’s Abigail Wentworth, the captain’s daughter, another woman passenger, Rufus Fox, Wentworth’s Quaker friend, and the Reverend Down, a “trained theologian” jealous of Fox’s enthusiastic interpretations of the Bible.

Trouble starts before they can cast off. Little Bob, a small man with a big temper, is released from the crew amid threats and curses. The worst happens once the anchor is weighed.

At first everyone thinks it’s suicide. The captain’s wife has recently died, and the captain wasn’t taking easily to widowerhood. No one is near the cabin when they hear the shot, and the captain’s door is locked. Redemption’s master, Nicholas Wright, has to knock down the door to get inside.

Spider thinks there’s something fishy about the death—in the way the blood is spattered about the cabin and the fact there’s no smell of gunpowder. He’s certain someone else’s finger was on the trigger of the gun killing the captain.

How to prove it? What was the motive?

Captain Wright proposes to take Wentworth’s body to a small island he loved and bury him there instead of the usual “committing his body to the sea.” Slipping the Redemption away from its escorts, he orders the ship to set sail for Eden Isle.

Now Spider has more than a murderer on board to worry about, for without the escorts, the ship is easy prey for any pirate in the vicinity. It’s also open to pillage by those on board, as he discovers more than one disguised pirate among the passengers, as well as a stowaway hidden below.

Over all hangs the threat of Ned Low, who may or may not be on that ship sighted on the horizon.

Eden Isle may end up being their own burial ground if they aren’t careful for, as Spider John counsels young Hob, “death is the inevitable destination of the man who sails on the devil’s wind.”

Whether he does so willingly or not.

Once again, Spider John, reluctant pirate, is called upon to solve a mystery. As in The Bloody Black Flag, this one also occurs at sea but even while cut off from the landlubber’s access to law and order, he still manages to find the culprit.

And he does it while fighting off pirates.

Interspersed with sea-faring terms, an attention-holding description of life aboard an 18th century sailing vessel, and a great deal of piratical name-dropping, Spider’s attempts to stay on the straight and narrow while seeking the murderer will keep even those not particularly into sea stories enthralled.

It’s a good bet all readers will thoroughly enjoy this rollicking tale of bold pirates, brave men, and women also handy with a cutlass, combined with the classic “locked room” mystery. Could the ending offer a hint that pirate queen Anne Bonny isn’t completely out of Spider’s life?