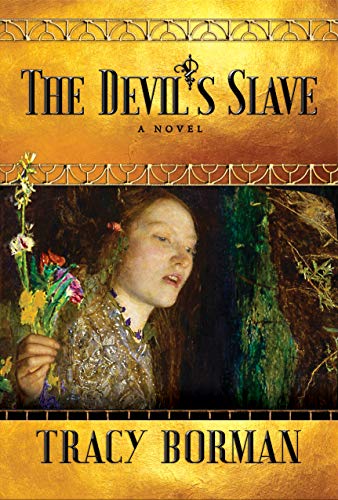 This is the second title in noted historian Tracy Borman’s trilogy about the court of King James I and the treachery and deadly rivalries that threaten to destroy the fragile reign of England’s first Scottish-born monarch. An avowed Protestant, King James is determined to eradicate the remaining Catholics, along with the witches he is certain threaten the souls of true Christians.

King James “had made it his personal crusade to rid the world of witches, as he claimed all wise women and healers were.”

Catholic plots to overthrow or murder James are rampant, both at Court and at the estates of the few remaining Catholic aristocrats. Frances Gorges is both an aristocrat and a faithful Catholic.

At the end of the first volume in the trilogy, Frances is pregnant with her lover’s baby. Unfortunately, her lover was executed for his part in the Gunpowder Plot, leaving Frances in a precarious position.

Not only might she be unmasked for her part in the Gunpowder Plot, but she has been accused of being a witch by no less than Lord Cecil. In self-defense Frances hides her skill as a healing woman, as King James equates knowledge of herbs with witchcraft.

Frances remembers her torture in the Tower when the witch-pricker’s knife jabbed at each of her freckles looking for a sign of Satan, while King James “had looked on eagerly as his servant performed the grisly task.”

Hiding away from society and the court in her childhood home of Langford Castle in the care of her arrogant and scornful brother, Edward, Frances awaits her baby’s birth.

Edward never misses an opportunity to point out France’s moral failings. “You, who have destroyed our parents’ standing with the king, threatened us with ruin—all to satisfy your selfish desires.”

Frances cannot deny that her pregnancy while unmarried has made life difficult for her family, but her condition is not one she deliberately sought. At least her parents did not send her to a nunnery where her baby would be taken away, and she would never know its fate.

Sir Thomas Tyringham arrives at Langford Castle with a proposal that will protect Frances from the threat of disclosure of her knowledge of the Gunpowder Plot.

“Though nobody but the queen and I know that the child is Tom’s, if your pregnancy were to be discovered beyond the confines of this estate, it would not be long for Cecil to hear of it. And he would use it as proof that you conspired with a notorious traitor to destroy the king and his entire parliament.”

Sir Thomas proposes that Frances marry him and move to his estate where she will give birth, and he will claim the baby as his. It is strictly a marriage of convenience, but it comes with a proviso: Frances must hide her Catholic beliefs as others have done, and live as subjects of the king.

He tells her that “though we may believe differently in our hearts, the days of plotting are over . . . Only those too blind to see still cling to the hope that the Catholics will prevail.”

After one of Frances’s servants is caught with a potion she has made, and is charged with witchcraft, Frances realizes the extent of the danger facing her. If the servant talks under torture, then Frances will be arrested and hanged. At any rate the local minister will visit Langford Castle and become aware of Frances’ condition and will learn her past history as a suspect in witchcraft.

Frances and Edward strike a deal. Frances will marry Sir Thomas and move to his estates, and in exchange Edward will intercede for the servant at her trial.

As the years pass Frances still grieves for her dead lover, but lives in conformity as a Protestant as the promise made to Sir Thomas. After four years she receives a letter from her lover’s sister asking for a meeting.

Dorothy, her lover’s sister, chastises Frances for her conformity, condemning her son” to a life of falsehood, of heresy.”

Dorothy tells Frances that the Catholic Cause is stronger than ever that Frances “felt a surge of hope, such as she had not experienced since Tom’s death . . . She felt the familiar rush of anticipation at the thought of wrecking vengeance upon the kind and his advisers.”

Frances is persuaded to return to court, to Princess Elizabeth’s household. At 13 Elizabeth is old enough to marry, and Frances can influence the princess to prefer a Catholic Prince.

The son of King Philip of Spain will make a perfect husband. Elizabeth will be declared Queen of England, and King Philip will invade England and return it to Catholic rule.

Frances returns to Court with her husband and her son, George, without telling Sir Thomas about her part in another Catholic plot.

Frances is nervous and conflicted about her part in the plot to put Elizabeth on the throne. King James’s heir, Prince Henry, is pushing his sister toward a Protestant prince, and Elizabeth is very subservient to her brother.

King James is not fond of Prince Henry, but they agree on the necessity of Elizabeth’s marrying a Protestant. Elizabeth, of course, is not consulted. High born woman are useful pawns to be used to cement a political alliance.

As Frances is drawn further into the plot, her enemies multiply. Prince Henry despises her and has too much influence over her son, George. The king is suspicious of her, and his henchman, Cecil, is spying on her. Even her own brother, Edward, is ready to betray her.

The Devil’s Slave is gripping historical fiction with a daring character in Lady Frances. One cheers her on in facing down her enemies, but her accepting a part in Catholic plots that will result in nothing less than civil war without reflecting on why she so certain the True Faith is the only bridge to Heaven.

In one sense such blind adherence to either one path or the other is common to the period; the lack of tolerance is not considered a bad thing at all. To the modern reader such intolerance is uncomfortable to accept.

Nevertheless, however tolerant one may be, Tracey Borman isn’t writing about the modern day; she is creating the past with all its brutality, its strict standards that are circumvented when one thinks it necessary, and its adherence to one religious path or another, also circumvented at a whim.

Whether one is comfortable or not with the Stuart era, it existed. And The Devil’s Slave is an account of the period that contains as much fact as fiction.