Devil's Mile: The Rich, Gritty History of the Bowery 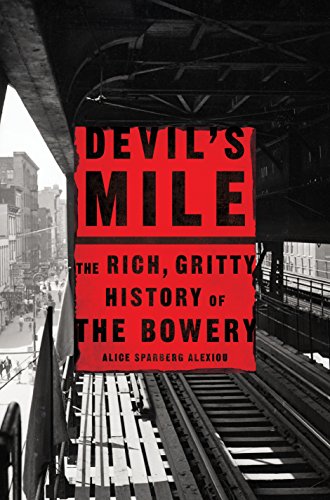 “Alice Sparberg Alexiou makes us miss the Bowery— more than we ever knew we could.”

Alice Sparberg Alexiou’s Devil’s Mile functions as the historical-narrative equivalent of time-lapse photography. Limiting her focus to a small but historically significant slice of New York, Alexiou offers a galloping and exhilarating tour, 400 years in 250 pages. She captures the cultural, social and historical ebbings and flowings as the Bowery progressed: from native footpath, to haven for Dutch and then Knickerbocker gentry, to gang-infested slum, to dangerously wicked playground for the Lower East Side, to Purgatory for the city’s bums, to Whole Foods regentrification.

The changes through time are striking, of course; Alexiou promises a rich, gritty history, and she delivers. But more than this, she carefully teases out the common characteristics of the Bowery that endured through time and gave the street its singular character.

From its beginnings Dutch New Amsterdam was far more liberal morally than the English and largely puritanical lands around it. Therefore it served in a sense as red-light district to the colonies. Taverns that sprang up on the Bowery, then an important road on the way to New England, soon became well-known destinations for rowdy conviviality.

This spirit of dangerous pleasure-taking endured through the centuries; it serves as the common thread connecting the events of Alexiou’s history.

The cultural firsts of the Bowery are nothing short of astounding. For better or for worse, blackface minstrelsy—a form of entertainment wildly popular in the 19th century—had its birth here with Thomas Daddy Rice and his “Jump Jim Crow.” Tap dancing came about with competitions between Black and Irish performers in Bowery theatres. Vaudeville began here—as did, apparently, that instrument of genius: the vaudeville hook. With the massive influx of Jewish immigrants in the 1880s and 1890s—rendering the Lower East Side the most densely populated place on earth—came the beginnings of Yiddish theater in America. And in 1973, with the opening of CBGB’s, Hilly Kristal gave punk its cradle.

That so many forms of popular entertainment flourished in the Bowery, Alexiou makes clear, was no accident. “. . . this is how art often comes about,” she writes: “when time and place ratchet up human anxieties to such a degree that they beg for expression.” Overcrowded neighborhoods, pugnacious and often rioting gangs—the Dead Rabbits, the Bowery Boys—dime and anatomical museums and freak shows, as well as a thriving sex trade, both gay and straight: all of these played their part in the distinctive cultural fervor of the Bowery.

By the 1910s, however, much of that vibrant if edgy culture was destroyed through reform: first by Anthony Comstock and his crusade against prurience in all its forms, and then by Charles Parkhurst and his war on political corruption. Prohibition, too, took its toll, quadrupling the price of a good drink, and encouraging the use of deadly substitutes. So did the coming of the El, which had the effect of shrouding the Bowery in perpetual gloom.

No longer a place of play, the Bowery and its flophouses, dives, and missions became places for the bums to hide while pursing the earnest work of drinking themselves to death. In documenting this generally colorless and dismal world, Alexiou does a good job of resurrecting the few heroic souls who made life for the bums worth enduring, if not quite worth living.

Today, thanks to Hong Kong investment and aggressive rebuilding, the Bowery is largely gone, its unique character largely erased. “As development along the Bowery continues,” Alexiou writes, “it feels urgent that I tell its story now: before all its old buildings—and the memories associated with them—disappear.” And that is her great achievement. Alice Sparberg Alexiou makes us miss the Bowery— more than we ever knew we could.