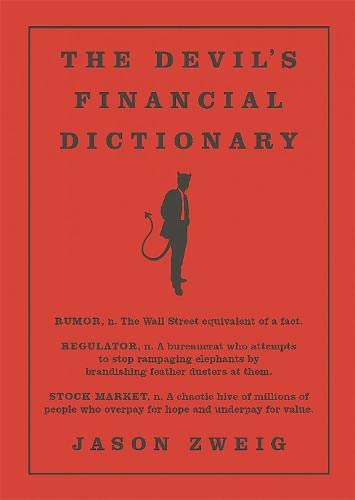 “Stick to the fundamentals, that's how IBM and Hilton were built . . . good things sometimes take time.” The great Hal Holbrook spoke those words to Charlie Sheen in the opening minutes of Oliver Stone's Wall Street. Despite Holbrook's character coming across like a Sage Advice Dispenser in the film, the words strike true today.

The economic wreckage from the 2009 collapse still smolders. The bailouts given to the perpetrators of the biggest financial disaster since the Great Depression should make any observer skeptical of the investment game. The Devil's Financial Dictionary by Jason Zweig attempts to give investors the necessary tools to confront the jargon, doublespeak, hubris, arrogance, amnesia, hysteria, and general idiocy endemic to those calling themselves “financial advisors.”

Like lawyers and doctors, investors come to financial advisors in a position of vulnerability, looking to specialists for professional help. The best case scenario involves growing an investor's money over time with sensible trades and creating investment to bankroll science and research. These days all an investor gets is jargon and empty promises. Couple this with a volatile system prone to instability, collapse, and irrational exuberance, and the mattress starts looking like a guaranteed means to preserving a retirement fund. Financial advisors are in a system dependent on fees. They receive fees whether the investor makes or loses money. If a patient lives or dies, the medical bills still arrive.

Mr. Zweig alleges the recent spat of corruption, incompetence, and loss came from a few bad apples in the financial industry. It doesn't help that Zweig is less a critic of the system than a fellow traveler. He writes a column on investing for The Wall Street Journal and is a board member to Financial History magazine. He credits his idea for The Devil's Financial Dictionary to Ambrose Bierce's acerbic classic Devil's Dictionary from 1906. To be fair, the dictionary entries give investors ammunition to ask smart questions to financial advisors. Peppered with images and photos, including reproductions of 17th century woodcuts and twentieth century photographs, the dictionary is a lively read.

If Zweig didn't pull his punches, this book might have been perfect and less schizophrenic. For all his esteem for financial advisors, some definitions can be merciless. “IDIOT, n. See DAY TRADER.” “IS, v. Has been.” The Dodd-Frank Act of 2010 is described as “a financial-regulation law . . . [that] succeeded mainly at being too long to read, too complex to understand, and too convoluted to implement.”

A regulator is defined as “A bureaucrat who attempts to stop rampaging elephants by brandishing a feather duster.” If those terms aren't confidence shattering enough, his description of the revolving door phenomenon is enough to make any potential investor seek a shovel to bury their hard-earned money in Mason jars in the back yard.

The main challenge is finding faith in such an unstable economic system. In the 19th century, the United States was subject to panic after panic. Today the financial sector gets routinely ravaged by bubbles, recessions, and systematic collapse. The sector remains so poorly regulated and the politicians eager to rake in campaign contributions that there is absolutely no motivation to fix an otherwise operable system. Now that Soviet Communism has been vanquished, capitalism has become the one true religion. It becomes much harder to conceive or imagine alternate systems for economic relations as the global free market mutates further.

Cynicism aside, investment isn't about blinking computer screens and the glorified Three Card Monte of moving money around. Investment is about the long-run. Zweig relates how the term “stock” came from agricultural origins. People telling their moral bona fides said they were “from good stock.” Put another way, a good investment is about turning an acorn into an oak tree. It doesn't occur with rapid speed or through complex mathematical chicanery. If something is a good product, it is worth investing in. Karl Marx, no fan of capitalism, said the commodity was the basic building block of economic relations.

The Devil's Financial Dictionary, while not as demonic as advertised, is a handy aid for investors who don't want to see their hard-earned money turn into ash. When that money vaporizes from poor financial advice, it's not coming back. Ask the financial advisor tough questions. Make her uncomfortable and have her answer for turning a potential retirement fund into an empty tin cup. Be more cynical in any appraisal of a financial advisor's alleged advice. Forewarned is forearmed. Caveat emptor.