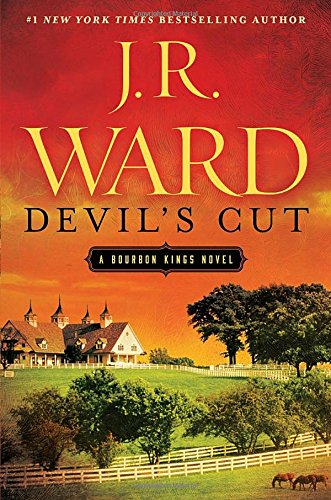 The Baldwine family is back and twistier than ever in J. R. Ward’s latest Bourbon Kings novel, Devil’s Cut. The conclusion of this sprawling epic of love, lust, and lots and lots of money overflows with intrigue; miscarriage, pregnancy, wrongful imprisonment, fatal illness, and financial scheming jostle for attention in this fast-paced novel.

Devils’ Cut picks up pretty much where the second part of this engaging series, The Angel’s Share, ended with elder brother Edward arrested after admitting the murder of abusive family patriarch, William Baldwine.

Ward spares no time in throwing that confession into question, though. The term “devil’s cut” refers to the amount of whiskey that is lost through absorption into the wooden barrel in which it is stored, and Ward makes a nice job of using that image as each of the Baldwine siblings tussle with the fear that they have “absorbed” some measure of their father’s devilment.

Edward fears that he has inherited his father’s coldness, Lane his father’s anger. Max, the third brother who was introduced only briefly in The Angel’s Share, fears he has inherited William’s wildness. Gin fears she is altogether bad. In Devil’s Cut, each sibling struggles to define him- or herself outside of their father’s larger than life shadow.

Ward has come into her own as a writer. Her dialogue is crisp and funny (where appropriate), and her vision of each character is clear. There is no place in which any of the large cast blends into another character or acts out of character. Her pacing in the main storylines each character faces is exemplary; no storyline feels out of balance with any other. Though this story was initially pitched as a romance between Lane and Lizzy, it is anything but focused on them (and a good thing, too, as Lizzy is by far the blandest of any character in the book).

If anything, this novel is a throwback to the “money and power” novels of the late ’70s and early ’80s. There are shades of Judith Krantz, Howard Fast, and John Jakes, even Edna Ferber, in this novel. Ward reveals in her author note that the ’80s TV show, Dynasty, was a favorite of hers. All of these influences play together to create a brawling floozy of a novel, full of big ups and downs.

Ward is clever, though, in her use of small intimate moments that bring her characters down to earth. Within Gin’s economic and psychological battle with her mistake of a husband lie small moments of self-reflection about her role as a mother; her growth from the spoiled princess of The Bourbon Kings to woman determined to fight for the child she took for granted is satisfying. There are similar moments of clarity for Edward, Lane, and Max that keep these characters from being caricatures of the rich and famous.

And at the end of the day, Ward has also crafted a satisfying mystery with a surprising conclusion! It is laudable that she also made that twist ending believable, a characteristic that is lacking in some modern popular fiction.

This is a big series about a larger than life family, so perhaps it is to be expected that the conclusion has a few areas of concern. First, after the introduction of William’s illegitimate son at the end of the second book it might have been expected that he would play a part in Devil’s Cut. He is barely mentioned.

Next, the storyline about Lane’s soon to be ex-wife ended so abruptly as to call into question why it was ever included. Finally, while Edward and Gin’s storylines end satisfactorily, those of Lane and Max feel forced into a “happy endings” box that is not entirely comfortable.

Still none of these issues is enough to completely derail this entirely enjoyable series. With Devil’s Cut, Ward should be able to exit the pink ghetto of the romance novelist (though she hasn’t dwelt entirely within that genre for many years) with aplomb. The romantic aspect of this book is no more than in any general fiction novel, and the sex is not a big driver for the story.

Ward has created a world of large personalities and problems that are beyond first world problems. Where she really shines, though, is in making those people and problems resonate with the reader by emphasizing her characters’ essential humanity. No matter how farfetched their issues, the characters real worries are about living and loving and parenting and what they will leave as their own legacies—all relatable to the average reader and beautifully written by this master writer.

And that ain’t easy.