The Devil's Chessboard: Allen Dulles, the CIA, and the Rise of America's Secret Government 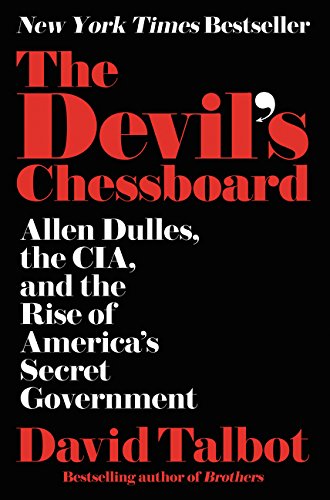 The history of the United States is not only a parade of rugged individuals and hardy pioneers, but one of family dynasties, entrenched power relations, and colossal wealth. History, like the intelligence services, is as much about protecting the vital interests of the United States as it is about burying evidence, silencing witnesses, and establishing a good cover story. The Devil's Chessboard: Allen Dulles, the CIA, and the Rise of America's Secret Government by David Talbot is a book chronicling the collision of two powerful dynasties, the Dulles family and the Kennedy family.

While conspiracies and the vilification of the military-industrial complex runs through fictional works from Oliver Stone's JFK to James Ellroy's Underworld USA trilogy, in nonfiction the same ground usually gets covered by kooks inhabiting the political fringes. The lack of credible evidence and the Noble Lie keep the citizenry asleep, reenacting John Carpenter's They Live without a second thought. Keeping employed, paying the bills, and watching prestige television has become far more important than what happened in late November 1963 in Dallas, Texas.

David Talbot, a senior editor at Mother Jones and the author of Brothers: The Hidden History of the Kennedy Years, plunges into the intimidating field of CIA history. His latest book, The Devil's Chessboard, presents itself as a peculiar hybrid. Part biography of Allen Dulles and part history of the Central Intelligence Agency, it eventually becomes a lengthy examination of the Kennedy assassination.

Not that Mr. Talbot is the first person to assert the fateful day in Dallas was the work of a conspiracy, but he has crafted a panoramic historical narrative with newfound evidence. He asserts the conspiracy to murder President John F. Kennedy came from Allen Dulles, former director of the Central Intelligence Agency. The practice of verifying history has similar traits to the practice of verifying a crime. In order for a charge to stick, an argument must be made and evidence collected.

Asserting Dulles had a hand in the Kennedy assassination means inevitable sensationalism and charges that Talbot is a “conspiracy nut.” But Talbot walks back the story to Dulles's days in the Office of Strategic Services, acting insubordinate and forging his own foreign policy. This policy included negotiating with the SS and establishing rat-lines. Like the early space program, the postwar intelligence game could be glibly expressed as “Our Nazis against their Nazis.” Talbot traces how Dulles, now in the newly founded Central Intelligence Agency, set up West German intelligence along Nazi lines with the Gehlen Organization.

New revelations show Dulles's epic mismanagement of the Bay of Pigs invasion. No CIA operatives with knowledge in the Spanish language were used. It also involved bottom-rung CIA personnel. Along the way the story shifts to the coups in Iran and Guatemala. The coup attempt by the OAS against Charles De Gaulle bears similar resemblance to the Kennedy assassination.

The sheer heft and scope of The Devil's Chessboard threaten to undo the narrative momentum. At times Talbot's style veers off into excessively tabloid material. His description of Senator Joseph McCarthy and Roy Cohn seem written with a homophobic relish, gloating over the sexual and moral hypocrisy of these titans of Cold War anti-communism. While the evidence is irrefutable, the tone wavers from hard-boiled investigative journalism to supermarket tabloid sensationalism. For a book attempting to give gravitas and legitimacy to a dangerously controversial topic, this weakness doesn't help.

In terms of sources, Talbot relies a lot on interviews, oral history, and secondary sources. Due in part to the US intelligence services destroying any paper trails and silencing witnesses, it also doesn't help that any individual seeking to shine a light on government malfeasance immediately gets labeled as a “conspiracy nut.” But Talbot backs up his asserts with admirable finesse, calling attention to the Lincoln assassination.

The Kennedy assassination, while tragic, wasn't without historical precedent. Even if this volume doesn't change minds, it does help in asking a battery of questions and dissecting the oddball nature of Lee Harvey Oswald. Talbot discusses how Oswald had terrible aim and the necessity of killing an alleged assassin to contain any unnecessary blow-back or exposure. And why was Allen Dulles as “The Farm” (the CIA's military base) during late November 1963? The evidence becomes murkier the closer the investigation gets to Dulles. While not necessarily damning, the activities of Dulles during that week seem mighty suspicious.

After the thorough investigation of the Kennedy murder, the book loses a bit of steam. The assassination of Robert Kennedy lacks rigor and scope, although Talbot does question the Lone Nut premise and Sirhan Sirhan. The book ends with the death of Allen Dulles, a memorable character in American history who can be set alongside the likes of J. Edgar Hoover and Richard Nixon. The Devil's Chessboard shines a light on his villainy and sociopathic drive to defeat Communism.