The Devil You Know: The Surprising Link between Conservative Christianity and Crime 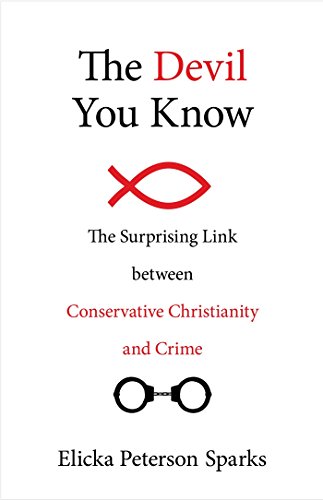 The Devil You Know by Elicka Peterson Sparks will not be a popular read in many corners of America. An associate professor of criminology, Sparks has taken on a topic to grapple with that many people will find insulting but others will find interesting, if not accurate.

She theorizes that there is a definite connection between conservative Christianity, especially Christian nationalism, and crime. Christian nationalism is defined as a political ideology steeped in “a Christian right to rule.” She explains that its followers believe in a revisionist history specifically focused on America’s founding fathers as devout Christians who did not believe in separation of church and state.

In an effort not to appear prejudicial about her theory, Sparks explains her personal position as: “I clearly do not believe in God, . . . I tend to strive even harder to be fair and scrupulous in my presentation of facts . . .” She delves into the Bible to make her points clear, and also shares her thoughts about the book, “I do not view the Bible as the literal word of God . . . I view the Bible as fiction . . .”

The book is well organized, and she brings her points home through her scrupulous research.

Her first chapter, “When Did Christians Get So Mean (Again)?” provides background to her research, and she admits that it has been an unsettling writing process for several reasons: 1. The connection between violent crime and the religious right has received such little attention; 2. The religious right is powerful and vocal and will probably attempt to discredit Sparks’ findings.

In this chapter she introduces how she came to their theory and discusses many of the surveys and academic works she studied. In questioning the meanness of Christianity she focuses on the doctrine of fear and violence versus forgiveness and mercy. She settles on Christian nationalism’s attempts to tout fear to increase its ranks—in particular, fear of death. She further declares the meanness as a result of using increased political power to coerce others to their cause.

Chapter two, “Jesus Loves You, But We’re His Favorites” is where she begins to explain her theory the Christian nationalism is criminogenic (crime-producing). She asks the question “Is the United States a Christian Nation?” and to answer it she delves into the historical arguments with special attention on the founding fathers and their own approach to religion. In her cultural arguments she focuses on the influence of religion on politics, in particular its hijacking of the Republican party. Having studied this concept, she concludes, “Suffice it to say that it is through culture that I contend that the United States is a Christian nation.”

She supports this statement with statistics—both national and international, and it is with these statistics that she maintains that due to the fact that the U.S. tops the list of countries with Christian populations, there is a reason to compare crime and Christian nationalism. In this chapter she goes on to examine the prejudices shown by the Christian nationalists to non-Christian religions as well as non-believers.

She provides an interesting look at American presidents including Andrew Jackson, Richard Nixon, George W. Bush, Lyndon Johnson, Jimmy Carter, and Barack Obama and their Christian practices once they take office. The results are eye opening.

In chapter three, “Why Pick on Christian Nationalists?” Sparks surmises, “While the reality of Christianity encompasses many positive features, it also includes a number of features that are criminogenic in nature.” She proceeds to explain that statement through a discussion of how Christian nationalism has developed a cultural identity related to the “perception of religiosity.” Specifically, it is an ideology that impacts culture, politics, and institutions. In this discussion she presents numerous attributes of this belief system and how these beliefs relate to criminality. It is in this chapter where she begins to discuss how the Bible justifies violence to the Christian nationalist community. In particular she points out that the Old Testament, with its violence, is appealing to this conservative group.

She points out in detail how Christian nationalists fail to support programs and policies that would draw down crime; they do not respect secular law. They do not support policies that support anti-discrimination laws and at times take that fight to violence.

She takes her theory of violent religiosity into the next chapter with the question: Why does religion cause crime? She answers that question with three points: “the explicit theology of violence present in fundamentalist religions; the psychology attendant in insulating oneself from fear of death through religion; and the promulgation of laws, policies, and programs to address crime that stem from this belief system.” Sparks explains each of these points with biblical discussion. Her discussion is especially interesting relative to the Christian doctrine of eternal life and fear of death. “Any endeavor . . . serves to connect us to something that will outlast us in the mortal coil . . .”—thus the religious desire for eternal life.

There is an eye-opening discussion about “rightwing authoritarianism (RWA)” describing a lack of charity by this group and explaining group prejudice.  She points out an important underlying assumption of her theory is the sense that many people believe that America is special because it is a Christian nation. She produces five predictions to support her hypotheses:

Here she takes the opportunity to encourage researchers to approach this theory through conducting more thorough surveys.

One of the most interesting chapters in the book is chapter five, “The Bible, Cafeteria Style.” Here she cherry picks scripture in the Bible and draws connections between the potential for more violent crime and specific scripture. While she points out various aspects of the New Testament and Jesus’ teachings, most of the connections are taken from the Old Testament, given its violent picture of religion. She makes her point regarding crime and religion with selections on violence; women as wicked and subhuman; “God hates homosexuals;” and the abuse of children.

She begins to close her argument with a discussion on the future of crime and justice in America. She presents an interesting dialog on the Ten Commandments in which she questions how many Christian nationalists can even name five of the commandments, much less all ten and more often than not, the commandments are used to make a point, not to live by.

Sparks closes her discussion with ten suggestions for combating religious violence in the United States. She makes these suggestions based on her research. While the suggestions hold water, and certainly are presented in an effort to curtail violence, the question remains; Who will take her up on these suggestions? The question is unanswered, but Sparks makes a good case for her theory; it’s a good place to start.

Whether the reader agrees with the theory presented in this book, or even with some of the hypotheses put forward, The Devil You Know is a compelling read, well researched, and interesting.