The Devil May Dance: A Novel 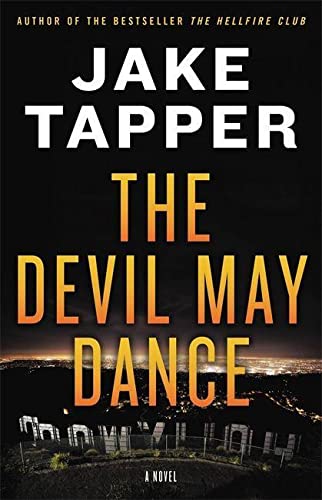 “Once one gets past the first half of the story, the pages begin to turn in more rapid succession.”

The premise for Jake Tapper’s newest mystery, The Devil May Dance pits Congressman Charlie Marder and his wife, zoologist Margaret, against Hollywood’s darkest antagonists including mobsters, kidnappers, and sex-traffickers. A pretty strong premise but the first half of the story reads more like a Hollywood gossip column than a mystery.

The story is set in 1961–62 when Charlie and Margaret are tossed into the fray by Attorney General Bobby Kennedy, who knows there is something going on between mobster Sam Giancana, and celebrity Frank Sinatra, and Bobby wants to know what that something is.

The pitch that Bobby uses to convince Charlie to do this is arresting Charlie’s elderly father—he gets out when Bobby gets what he needs. To gain this knowledge, Bobby uses Charlie’s war experience to get him a position as consultant on the movie set of Sinatra’s movie, The Manchurian Candidate. A friendship between Frank and Charlie blossoms, giving Charlie the “in” that he needs.

Tapper presents an interesting opening with Charlie and Margaret at a cemetery party with Frank and the Rat Pack, and the dead body of a young woman is found in the trunk of Charlie’s rental car. A strong opening but the story starts to sag from there through the first half of the book, as Tapper takes the reader into a lengthy backstory that leads up to finding the body.

To get to this point, Tapper takes well worn stories about the Rat Pack, Kennedy inuendo, Scientology, and the countless people who hang around the celebrities, and he repeats the stories. Interspersed among these stories he tosses tidbits of activity to touch on the original premise.

One of these tidbit sequences is when Margaret, at a Rat Pack party, sees her niece, Victoria, who mysteriously disappeared from home one day, and when Margaret approaches Victoria, the girl hardly recognizes her aunt. The sleazy film empresario she is with quickly scuttles her out of the party. At this point, three stories begin to surface—Sinatra and the mob, a dead woman in the trunk of a car, and Victoria.

Tapper continues his Hollywood stories, throwing in a situation where a young actor, Chris Powell, who challenged Sinatra over a woman, is murdered. And tale number four begins to emerge as this murder continues to surface throughout the story. Tapper takes this story a step farther when he includes L. Ron Hubbard and employees of the Church of Scientology in the Powell murder.

But just as the overkill of Hollywood and political stories starts to get old, the reader gets to the second part of the book, and activity starts to pick up. Tapper begins to bring the search for Victoria, Sam Giancana’s relationship with Frank, the Chris Powell death, and the body in the trunk, in line with each other.

Tapper gives us a good fight scene in Disneyland park when Charlie, accompanied by Peter Lawford and Sammy Davis, Jr., follows a clue to his niece’s location and rescues her. In self-defense, Charlie kills the kidnapper, but he, Victoria, Lawford, and Davis, escape undiscovered. One does not feel bad that the kidnapper met a gruesome end.

In another gripping scene, at the Academy Awards ceremony, Margaret confronts one of the people involved in Chris Powell’s murder. This is particularly well done, as Tapper unveils the bad guy to be one of the least suspicious characters. It isn’t until closer to this scene when the reader begins to get a sense of this character’s true role in the story.

As one reads The Devil May Dance there is a sense that many things are happening around Charlie and Margaret over which they have no control, and as protagonists, they don’t really take a strong role in resolving these mysteries—instead they find out after the fact that Frank, and Bobby, and even Charlie’s father, were steering the boat and Charlie and Margaret were being used rather than using.

Once one gets past the first half of the story, the pages begin to turn in more rapid succession. For those who are younger and not aware of many of the stories that Tapper relates, the gossip column aspect can be fun, but they still have to muddle through those stories to get to the meat of the matter.

However, Tapper is to be congratulated on the heavy research he did in order to bring these stories to the forefront.