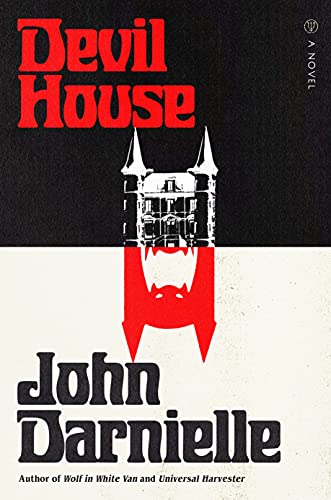 An intrepid journalist solving a crime—especially a murder— is a familiar and enduring fictional premise in movies, mysteries, and on television. This, despite the fact that it rarely happens in real life, as cops and police reporters alike are quick to point out.

In his engrossing new thriller, Devil House, John Darnielle, a rock musician (Mountain Goats) turned bestselling novelist, takes this trope in a slightly new and intriguing direction: True crime author takes on a real murder, and tries to use his own investigative skills to solve it.

This is not as far-fetched as it might seem.

The disciplines of long form journalism and fiction writing are not that far apart; both involve heavy researching and reporting. Of course, writing about solving a crime and actually solving one are two very different things. For that reason, among others, young journalists are taught one of the cardinal rules of the craft: Never become a part of the story you’re covering.

Gage Chandler, the narrating protagonist of Devil House, wrote his first true crime book while still a journalism student at California Polytechnic State University, colloquially known as Cal Poly. The successful paperback told the story of a woman Gage believed had been wrongly executed for a double murder, a crime which he concluded was actually committed in self defense.

When this first effort was sold to the movies, Gage’s career was off and running.

“I’ve been writing about crimes ever since: the crimes people tell stories about, and the secret ones our stories seek to conceal,” he writes.

Along with his true crime outings, the young author doubled down, turning his hand to fiction—paperback serial killer thrillers—but under a pen name to preserve his reputation.

Gage’s decision to keep the genres distinct is understandable.

In fiction, the author is both omniscient and omnipotent—all loose ends can be neatly tied off. Fiction is also an act of imagination, at best, informed imagination. With nonfiction, the resolution can be messy and ambiguous; true crime writers are expected to paint what they see. This dichotomy is at the heart of Devil House.

As part of his research for previous books, Gage would find his way into properties where the crimes took place, some abandoned.

“The field trips I took to them helped set the tone for the way I work: learn a lot about a site, then physically enter it, breaching the barrier from the conjectural to actual while they’re all still rich and vivid in my mind.”

“I feel a ghostly kinship with the lives once lived atop the same ground that cradles me while I sleep,” Gage explains.

This time, he has added a new wrinkle to his usual discipline of research and interviews about cold cases. Capitalizing on the deep fascination with true crime, he turns to the internet and advertising for help locating evidence from true crime buffs.

Devil House is a good tale, well told, with the requisite twists, turns, and surprises. In parts, Darnielle’s writing is lyrical.

There are, however, a number of narrative speed bumps and detours, which may be intriguing to some readers but distracting to others.

Some sections are written in faux-Medieval English, and there are several, sudden shifts in point of view. At one juncture, the narrative of the murders Gage is investigating for his new book is interrupted by lengthy flashbacks to the murders in his first book. While true crime aficionados may not be put off by the more graphic gore in those sections, it may be more than some crossover readers might prefer. And, as in other recent, popular thrillers, there is an unreliable narrator.

The most compelling parts of Devil House are Gage’s insightful, sometimes painfully clear-eyed reflections on the craft of true crime writing. It is one that rings true—sometimes spot on—to a nonfiction crime practitioner.

For example, Gage is right about the importance of a first impression of a crime scene, even years after. This includes something as trivial as his sentimental affinity for an old desk he imagines belonged to a crusty newspaper editor.

Gage says he tries to honor the dead in his books, which he claims sets him apart from some other true crime writers. In his description of grisly crimes he tries to keep in mind their “real human cost.”

At the same time, Darnielle—through Gage—is particularly acute on the finer points of true crime writing, like the challenge of portraying an uninteresting murder victim: “I have to breathe a little life into him so that when he dies you’ll care enough to feel bad about it.”

Gage’s introspection can be brutal: “Writers are terrible people, everything’s just material to us . . . It’s voyeur work.” Yet he also writes, seemingly contradictorily, “There’s no way it doesn’t leave some kind of mark on you.”

Darnielle, like Gage, knows what he is doing. For fans of true crime and fictional thrillers—as well as for would-be practitioners of either—Devil House is an entertaining, but also an instructional read.