The Devil and the River: A Thriller 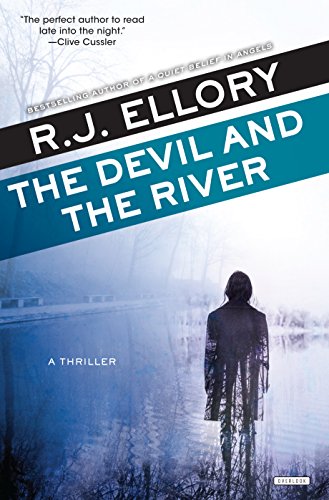 “an exploration into the mystery that is the human mind, pointing out that real-life devils live among us.”

“Someone had murdered a girl. Someone had cut out her heart and replaced it with a snake. Someone had roughly stitched her body and buried it in mud, and there the body had remained for twenty years. It had taken six men four hours to bring her back.”

In 1954, a group of young people go on a picnic. Among them are Michael Webster, a soldier returned from war, his sweetheart Nancy Denton, her best friend Maryanne Benedict, Matthias Ward and his younger brother and sisters. Michael and Nancy go for a walk in the woods but Michael comes back alone.

They searched, but Nancy was never seen again. They decided she was a runaway, until 20 years later, when her body is found in the river’s mud.

Enter John Gaines, returned from Vietnam with enough specters of his own, the new sheriff of Whytesburg, Mississippi. He doesn’t know it, but he’s been handed the worst case of his career. He easily finds a suspect in Michael Webster, now a certifiably crazy derelict, who practically admits he killed Nancy—or is that what his ramblings actually say?

Gaines’ investigation also turns up evidence pointing to Matthias Wade, present the fateful day Nancy disappeared. Wade’s the son of a rich family, now an important man in his own right. It’s said he also loved Nancy, but it was understood she and Michael would marry, so he’d accepted that, or so everyone thought.

Would he commit murder?

When Wade pays Michael’s bail and a few days later, Michael’s trailer burns to the ground with him inside, Gaines thinks he could. When Michael’s head and hands are found buried in a field, he’s certain of it.

The sheriff zeroes in on Wade, searching for anything and everything about that long-ago day that ties him to Nancy’s death. He’s warned off the case but he’s in too deep to stop. The investigation becomes a burden, sending his thoughts again and again to all he saw and suffered in Vietnam, but he has a promise to keep, to bring justice to Nancy Denton, Michael Webster, and Nancy’s mother.

“That was the burden Gaines carried, and he vowed to carry it well, to carry it resolutely, never faltering or resting until he could set down that burden at the feet of whosoever was responsible.”

Instead of becoming simpler, the case is now more convoluted and complex. Michael’s death isn’t the only one to follow Nancy’s, and Gaines soon finds several preceded it, also.

Maryanne Benedict offers her help; Gaines finds he’s attracted to her in a more than professional way, but he can’t let that distract him. Not yet. He learns the Wades are a family accustomed to doing what they want, and it doesn’t matter who they hurt in the process. They’re as cruel to their own family members as they are to others.

Michael Webster told Gaines he was under a curse, that he made a deal of sorts with a devil. Whether that’s true or not, something was brought back to Whytesburg, and it touched the group of youngsters that summer day in 1954.

“They had opened a door, a portal, into some other place, some other reality, and through that aperture came something strong and malevolent enough to poison the very air.  The town was infected and there was no way to put it back where they found it.”

It’s up to Gaines to deliver the town from evil and bring justice to Nancy Denton and the others that evil touched.

This is a leisurely novel, the pace as sleepy and Southern as the setting, but it’s by no means dull. In the midst of recovering from his own view of hell during the war, John Gaines is a sympathetic character in an unsympathetic role, determined to find the truth, a relentless bloodhound bringing a man to justice in spite of his wealth and status. His reminiscences of Vietnam and the parallels he draws between his experiences in that place and those occurring in Whytesburg are described in words tinged with a profundity that is near-poetic.

The characters of Whytesburg and its surroundings are convincing and credible for that era. Their dialogue and beliefs bring to mind the South of the seventies and will conjure up vivid images to any reader who lived during that time in a similar place.

With its brief suggestion of voodoo, Gaines’ flashback moments, and his belief that a true evil lives among them, The River and The Devil is a definite thriller. It is not the kind that will keep the reader from sleep, however, but will give him chills as he realizes he’s reading an exploration into the mystery that is the human mind, pointing out that real-life devils live among us. In an odd quirk, the actual serving of justice is given a brief mention while its aftermath is described with detailed irony, pointing out truly that “the evil men do lives after them.”