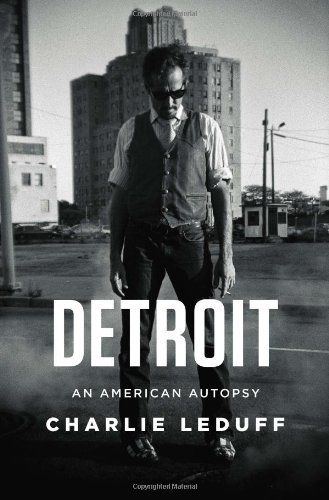 “Go ahead and laugh at Detroit. Because you are laughing at yourself.”

The circumstances, outlook, and internal tension/turmoil of individuals who once had something important but no longer have it, are so very different than those of individuals who might have aspired to it but never realized its possession.

A place dominated by the former is so very different than the places of those whose dreams have never been realized. Detroit is such a place, as Charlie LeDuff explains in Detroit: An American Autopsy, a place of Used-to-Haves.

And a Used-to-Have is an infinitely more dangerous type of man than the habitual Have-Not. This type of man is waging his own inner war.

His pragmatism, gritty realism, and down-and-dirty style of telling the truth leaves no room for a delusional Pollyanna-ish perspective. His vignettes of despair chronicle the futile odds against despair, corruption, and indifference, even as highly principled individuals soldier on, determined to prevail.

He suggests the ethos in Detroit exudes an abdication of adult leadership, the hustle celebrated over legitimate work. Indicative of how conflicted: Detroit has the distinction of being the only American city to have been occupied by the United States Army three times.

Michigan may be one of America’s most northern states, but spiritually it is one of the most southern. During Detroit’s great expansion between 1920 and 1960, nearly half a million blacks came north from the cotton fields of the South as part of what is known as the Great Migration.

Detroit was seen as the Promised Land, where a man could buy himself a house with a patch of grass, just as long as he had a job to pay for it. And Detroit had plenty of jobs.

The 20th century great economic transformation, enabling so many blue collar workers to move into the middle class, began in Detroit, the birthplace of mass production, the automobile, the cement road, the refrigerator, frozen peas, highly paid blue collar jobs, home ownership, and credit on a mass scale. America’s way of life was built here.

It’s where installment purchasing on a large scale was invented, called the Arsenal of Democracy in the 1940s, the place where machines were made to stop the march of fascism.

So important was the Detroit way of doing things that its automobile executives in the fifties and sixties went to Washington and imprinted the military with their management style and structure.

Charlie LeDuff evocatively writes what once was, is no more. Today the boomtown is bust. It is an eerie and angry place of deserted factories and homes and forgotten people. Detroit, which once led the nation in home ownership, is now a foreclosure capital. Once the nation’s richest city, Detroit is now its poorest.

Detroit’s downfall resulted from the intersection of two corrupted attitudes toward work. The imperial auto executives were insular, innocent of larger forces, and incompetent. Sabotaging labor employed a “fuck hard workers,” a sentiment appearing as graffiti in a worker’s locker.

The author asserts that Detroit can no longer be ignored, because what happened there is happening everywhere else. Neighborhoods from Phoenix to Los Angles to Miami are blighted with empty houses and people with idle hands. Economists talk about the inevitable turnaround. But standing here in Michigan, it seems the fundamentals are no longer there to make the good life.

Go ahead and laugh at Detroit. Because you are laughing at yourself. Charlie LeDuff’s sobering assessment is underscored by the consideration that the $14 per hour wage for today’s auto worker—if he can actually get a job after adjusting for inflation—is actually three cents less per hour than that same job paid BEFORE Henry Ford revolutionized the working man’s compensation with his $5/day program, implemented nearly a century ago, on January 5, 1914.

Charlie Duff exemplifies the old school reporter, the type who talks to people, listens to their story, and then tells it through the stories of those whose life experiences are more gripping than any summary statistics.

Charlie LeDuff observes at the conclusion of his powerful profile of Detroit, “We are born to a time. What you do with it is on you. Do the best you can. Try to be good. And live.”