The Desperate Hours: One Hospital's Fight to Save a City on the Pandemic's Front Lines 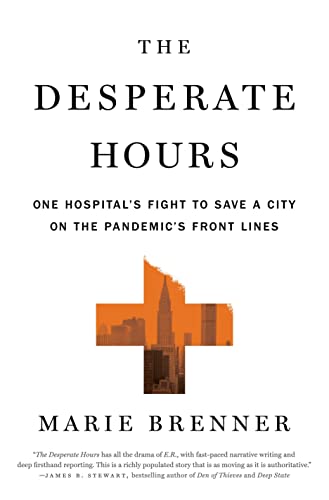 The Covid-19 plague descended with a vengeance on New York City in early March 2020. The city was utterly unprepared, including its preeminent hospitals. It was not the proverbial “last mile” that hospitals face. What they faced was a road that faded into an unknown horizon. An astounding 20% of hospital healthcare professionals left their jobs (15% at New York Presbyterian), more so among the front-line, professional workers.

The Bad: There were unconscionable delays for Guidance to employ well recognized, life-saving public health practices of disease tracing and prevention (dating back to the 19th cholera epidemic in Britain). Inaction by The Centers for Disease Control and Prevention (CDC) and the World Health Organization (WHO) was indefensible.

The President of the U.S. dismissed Covid’s gravity and wildfire progression. Instead, Mr. Trump proffered ingesting Lysol and the unsound use of chloroquine. He disdained science (and renown infectious disease experts), while dispensing one fabrication after another—likely leading to 100,000 preventable deaths. His surgeon general, Dr. Jerome Adams, tweeted on February 29, 2020 “seriously people—STOP BUYING MASKS.”

Without explicit federal guidance we did not benefit from Covid testing, the use of masks, and social distance. Free speech was gagged in the Trump administration to align with the federal craziness. The epidemic turned pandemic proliferated widely, making NYC its epicenter. By four weeks into the first surge, there were approximately 1000 Covid deaths in NYC.

A profound lack of leadership, failure to act, prevailed by NYC’s Mayor, Bill DeBlasio, except when it came to his daily two-hour trips to the gym. The city’s world class Department of Health and Mental Hygiene (DOHMH) fell prey to administration demands to suppress information that would sully the mayor or fuel efforts to close down the city, including one million public school students.

Behind the daily televised exhortations from New York State’s Governor Andrew Cuomo, he shamelessly muzzled the State’s Department of Health: 28 officials resigned. He was given to “gifting” large posters of himself to those he considered in his favor, and with unbridled ambition inked a $5 million book deal extolling his leadership during the pandemic. But it was his coverup of the Covid deaths of 4,100 nursing home residents and a steady stream of sexual harassment charges that did him in. He resigned as governor on August 10, 2021.

Another loony jamming a proper national response to the pandemic was Governor Ron DeSantis of Florida, famed for forbidding mask mandates in schools, and baselessly saying that Covid vaccines caused infertility. Robert F. Kennedy, Jr. was another anti-science, antivaxxer, given to conspiracy theories. No honors go to the CEO of massive Northwell Health, Michael Dowling. He, too, was given to media posturing, though it was his heartless pursuit of unpaid medical bills, with interest, by patients during the Covid pandemic that revealed his dedication to profit, not patients (he later rescinded the bills).

The lionized organization, McKinsey and Company, bears mentioning among “The Bad.” They raked in $100 million ($10 million from New York Presbyterian) to model and advise state and federal agencies on what medical and resource demands lay ahead for them. Their wildly exaggerated predictions included 100,000 Covid patients and 40,000 ventilators.

The Good: In early March, 2020, as Covid began to spread rapidly, no one knew what was happening or how it would so massively grip the residents of NYC. Nor was there any credible knowledge of how to counter its deadliness.

This was the context at New York Presbyterian Hospital, a premier, a $9 billion/year, academic medical system of care with paired nuclear facilities in Manhattan’s midtown east (Weill Cornell) and northern Manhattan (Columbia Presbyterian). Where better to report on Covid’s hospital dominion in NYC?

Which is precisely what Marie Brenner, a highly accomplished journalist, set out to do in the summer of 2020, after overcoming impossible odds to do so. Her unique and extraordinary account of the Covid invasion at New York Presbyterian bears witness to an astonishing degree of human compassion and resolve, especially in those early months of the pandemic. Her first-person account, drawn from unimpeded access to over 200 of the hospitals’ patients and families, public health and clinical doctors, scientists, nurses, respiratory therapists, and leadership, fills the 491 pages of The Desperate Hours.

“The Bad” account above is so chilling it begs for a report on “The Good.” Which Brenner provides using New York Presbyterian as her “beat.” Brenner’s reporting does not spare revealing this hospital system’s cultural and racial biases, its corporate suppression of information, and its grave individual and collective inactions.

But Brenner clearly comes out of her New York Presbyterian gauntlet concluding that the good far outweighed the bad. "He that is without sin among you, let him first cast a stone." John 8:7. Her talents as a fine storyteller produce an overabundance of examples of the good, epitomized by dozens of patients, families, physicians, nurses, techs, epidemiologists, scientists, and support staff. Each profile is keenly drawn and highly readable, but fewer characters and less of their personal background (in many cases) would have sufficed.

“A single twig breaks, but the bundle of sticks is strong,” said the Native American, Shawnee Chief, Tecumseh. At NYP, all hands were summoned, and respond they did, often caring for ill patients beyond their training and experience. As a collective “bundle” they did not break. They stayed the course: despite the peril of becoming ill (and infecting their children and families).

The pandemic eroded many an income, while sparking rises in the cost of living. Some worked as many as 15 hours/day, were sleep deprived, isolated from their families and often their colleagues. Doctors and nurses were repeatedly defeated in their valiant efforts to keep people alive. If a doctor, for example, left for five hours of sleep, when they returned, half of their patients had died.

Brenner gives a special garland to Dr. Steven Corwin, CEO of NYP. He gave her open access—subject to medical privacy requirements—to the hospital’s services, its staff and patients (including their families), without which this book would not be. Her candid depiction of Dr. Corwin did not exclude: his hesitancy to not comply with (faulty) CDC Guidelines not calling for masks, though it was no mystery that wearing masks would have prevented the spread of the deadly coronavirus; his $10 million/year salary (plus a spacious NYC apartment), inexplicable to hospital workers making minimum wage, professionals as well; and his fealty to corporate demands, particularly to protect the hospital’s reputation and bottom line. Still, she salutes his career, before the C-Suite, as a brilliant cardiologist. She admires his herculean efforts, sparing no cost, to obtain Personal Protective Equipment (PPE) and hunting for ventilators; and how New York Presbyterian, under his leadership, almost overnight constructed ICU beds when there were none. He is described as not letting sleep get in the way of his duty to serve NYP’s patients and personnel, his turning to classics in literature to guide him, and as a mensch, a physician who abided by his oath to save lives and do no harm.

The Dead: Brenner reports that early on the cases of Covid 19 doubled every 7–10 days. A thousand of NYC’s residents died from Covid by the end of March, 2020.

On Sunday, May 24, 2020, The New York Times devoted Page 1 to a memorial listing of the names of 100,000 people who had died in the pandemic, “An incalculable loss.” The print was too small to read from afar, creating an image of a tombstone.

Over one million Americans have died from Covid at the time of this writing.

Each of these tragic outcomes, of course, is compounded by how an early or preventable death riddles a family, adds financial hardship, and sets a troubled trajectory for the future. There is community upheaval, too, adding greater difficulties accessing both acute and chronic disease medical care—most powerfully felt by people living in poverty and people of color.

Covid is now the frisson of our daily lives.

Any small or petty critical comments should not detract from Brenner’s extraordinary achievement. The Desperate Hours guides the reader through the unprecedented hell that Covid rained on New York Presbyterian Hospital, and our individual and collective lives. Yet, it is a hell studded with the power and beauty that we humans bring to living—and dying.