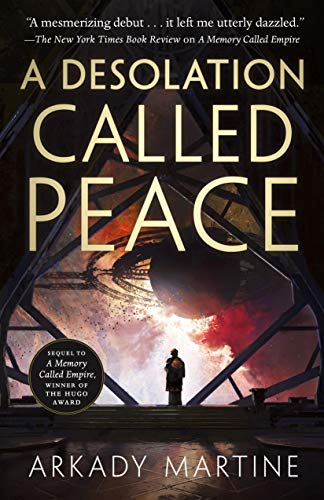 “I am an exile twice over, once from my home and once from Teixcalaan, which could never have been my home.”

A Desolation Called Peace picks up three months after Arkady Martine’s Hugo Award-Winning debut, A Memory Called Empire, ends: with the looming threat of an alien armada on the horizon. Ambassador Mahit Dzmare is once again thrust between Lsel Station and Teixcalaan—this time as a linguist. The summons comes just as things on Lsel Station grow uncomfortably tense for Mahit. But the opportunity to work alongside Three Seagrass as they attempt to translate the impenetrable language of the enemy is fraught with all the conflicting emotions she left Teixcalaan to escape—emotions that threaten to grow in complexity with each passing hour.

Meanwhile, fleet captain Nine Hibiscus must somehow prevent the enemy from destroying her ships while also navigating Teixcalaan politics, and back at the heart of the Teixcalaan empire, the 11-year-old heir to the throne, Eight Antidote, must navigate political straits of his own.

The nearly 500-page novel follows Mahit, Three Seagrass, Nine Hibiscus, and Eight Antidote as the approaching existential threat reveals the fault lines in alliances, along with the insidious nature of colonialism, on a scale both vast and personal.

All Martine’s characters are fully realized. It is fiercely complex Mahit Dzmare, however, who wins the reader’s heart. Mahit loves Teixcalaan just as she hates herself for loving it. Her awareness strikes at the reader from the heart of Martine’s prose. “Teixcalaan had reordered her mind, her sense of aesthetics,” Mahit thinks at one point. Her self-awareness is a source of pain. During an encounter with a citizen of the empire, she thinks:

“To be vicious in her own despair, to display the wound of her desire in full: No, I will not be Teixcalaanli, I am incapable, I know, let me hold the bleeding lips of this injury open for you to see the raw hurt inside. To say, I would never compare myself to one of you, with full consciousness that she would, and had, and could not stop.”

Identity, politics, and romance play out against a sweeping cosmic tale of first contact. Martine’s words ache in the back of the reader’s throat, lingering long after the last page. She accomplishes what the best SFF is capable of accomplishing: creating a world that is at once fascinating in its newness and yet entirely, brutally familiar. The shifting points of view allow her to explore the heart of empire from without and from within, and the border politics will resonate with any reader who has felt the breath of exile in their lungs—as well as those who have not.

Martine walks a fine line between prose so complex it is almost disconcerting in its intelligence and poetry. By the end of the novel, the story feels as if it’s hurtling through space, even as the events themselves take place over only a few days. Readers unfamiliar with the first novel’s events will struggle to keep up, but those who have read A Memory Called Empire will fall back into the dazzling world of Teixcalaan—whose very name means “the world” in Teixcalaanli—finding themselves as drawn to the poetry and drama of empire as Mahit and her imago Yskandr.

While it is tempting to analyze the parallels between the novel and real-world events, both present and historical, the story does not moralize. Martine’s exquisite characterization asks questions without easy answers.

Timely, intelligent, and fascinating, the novel’s only major drawback is that the ending, while satisfying, doesn’t promise an immediate successor. Lest readers despair, however, Martine has hinted in interviews that she has more books planned in this universe.