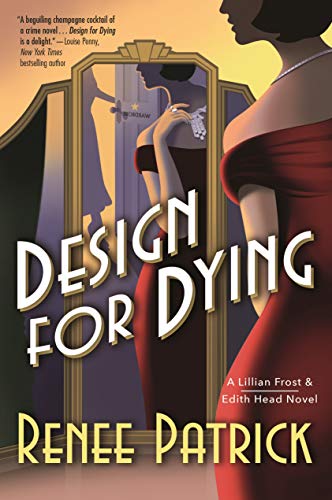 In this first of a planned Lillian Frost & Edith Head series, readers will be swept away on a murder mystery set in Hollywood’s Golden Era.

A country girl arriving to make her dreams come true at a casting call, Lillian Frost finds a steady job instead arranging and selling lingerie at a department store. Living hand to mouth and trying to get ahead, Lillian learns a former roommate has been murdered. She is soon the first in a line of suspects. The Alley Angel, as Ruby Carroll is being called, was found shot multiple times wearing clothes too glamorous for her to afford, and on her is Lillian’s mother’s brooch, which Ruby pilfered.

As Lillian tries to untangle herself from accusations leveled by two cops—one the handsome good guy and the other the mediocre disbeliever—she discovers more than she intended. Ruby didn’t just steal Lillian’s heirloom jewelry, she stole designer clothes off Paramount Studios set from under the nose of Edith Head, lead designer, costume matriarch, and genius. Edith’s job is now at stake: Already disliked for her near dictatorial running of the shop and the jealousies her talent inspire, her job is on the line for the lax security of the costume department and for once having hired Ruby, the studio thief and sweet-talker.

Lillian and Edith join forces to clear their names and find themselves deeper in trouble with shots fired at them and scandal beginning to bubble beneath their feet as they learn more about Ruby, a mysterious Argentine playboy with a heart of gold, and a Hungarian princess hiding from her family.

This book is filled with a cast of characters from a flirtatious Bob Hope in the fitting room making suggestive comments to Barbara Stanwyck, who participates in a car chase. Edith Head is also a real historical figure, known for her costume designs for which she won several awards.

Renee Patrick, pseudonym for husband and wife team Rosemarie and Vince Keenan, writes with panache. The language and description of the era is on the money, with rough speaking characters and their brilliantined hair, noirish detectives with quick patter, lotharios and playboys, naive girls fresh from the farm, and slick Hollywood types.

Design for Dying is well designed indeed. The characters are well developed and likeable—no one is a perfect stereotype, each having some psychological growth or motivation—and the world is built so well that readers will feel right at home with Lillian as she pounds the pavement for the truth.

The story is mainly driven by dialogue and snappy action. Lillian is the narrator, telling the story from a first person point of view. There are some plot holes, as there always are in any fiction requiring suspended disbelief, such as Detective Morrow permitting Lillian to assist in the case—from examining the clothes Ruby was found in to arriving on the scene in the nick of time at her call. Though the author(s) give Lillian a solid reason for continued participation in the investigation, there is no reason for Detective Morrow to have brought her in.

Fans of Hollywood noir films, the Poirot series, and other cozy mysteries will want to read Design for Dying as will anyone with a love of historical characters brought to life.