Desert Storm 1991: The Most Shattering Air Campaign in History 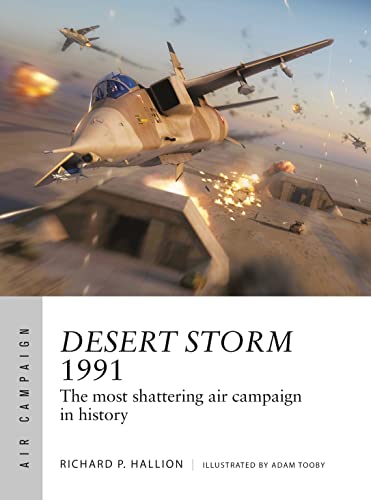 “well suited for a short introductory volume for this air campaign, with multiple charts, graphs, diagrams, and tables showing the major weapons on both sides, how the campaign was planned and conducted, and statistics galore for interested readers.”

Since the beginning of airplanes and air forces, the proponents of air power have predicted the war-winning aspects of strategic bombing, especially the ability to strike the enemy’s homeland and bring about victory without heavy ground combat. Two world wars proved both the possibilities and limits of these early theories as airpower developed into a potent weapon and a critical necessity for battlefield victories, but it never truly replaced ground forces as a strategic war-winning capability.

The Cold War, with the two limited wars fought by the United States, continued to show the potential tactical capabilities of air power, which were often limited by strategic and political considerations within the larger threat of nuclear warfare between the two superpowers of that era.

But all of this changed in 1990 with the fall of the Soviet Union and the emergence of the United States as the sole superpower, at the peak of its post-Cold War strength. When Saddam Hussein invaded Kuwait and threatened to invade Saudi Arabia, American air power provided an immediate deterrent and visible capability to defend American interests in the region. As a global coalition assembled to provide the ability to liberate Kuwait, American generals, applying the harsh tactical and strategic lessons of the Vietnam War, combined with new tactics and capabilities created to fight the Soviet Union in a high-intensity European conflict, created the first integrated strategic and tactical air campaign in history.

As the book lays out, the Coalition air forces were equipped and trained to defeat the type of defense system deployed by the Iraqi Air Force and within a few days of the commencement of air strikes on January 16, 1991, the Coalition dominated the skies over Iraq and Kuwait, destroying or driving into exile most of the Iraqi Air Force, dismantling their air defense network, and destroying Saddam’s command and control capability for this army in Kuwait.

Turning its attention of tactical air support to prepare for the ground drive into Kuwait, the air forces were able to cripple Saddam’s army and render it almost combat ineffective by the time Coalition forces rolled forward on February 24, 1991, causing the collapse of Iraqi resistance within 100 hours of the first armored column movement into western Iraq in what become known as the “left hook.”

However, even in their dominance, Coalition forces did not have everything their way. Iraq maintained a capability throughout the war to launch mobile ballistic missiles, threatening both Israel and Saudi Arabia and jeopardizing the Coalition by trying to bring Israel into conflict with Iraq. Even the extensive surveillance and targeting capability of the U.S. and its allies never truly stopped these attacks, which led to the single biggest loss of American life when a Scud hit a US Army barracks in Saudi Arabia.

At the peak of air operations, nearly one third of all missions flown by the Coalition air forces were spent on hunting these mobile launchers, diverting missions from other tasks, and creating a political problem for the Coalition until additional special operations forces were called in to help hunt and target these launchers on the ground for aircraft to attack.

Considering the immense task the Coalition air forces faced, their losses were amazingly light for the number of missions flown, unfortunately, the proponents of air power now began to oversell the potential for air strikes to win conflicts alone, and as the author concludes, the recent conflicts in Afghanistan and Iraq since 2001 have not been as influenced by air power as Operation Desert Storm.

The book is well suited for a short introductory volume for this air campaign, with multiple charts, graphs, diagrams, and tables showing the major weapons on both sides, how the campaign was planned and conducted, and statistics galore for interested readers. It also has a comprehensive biography for readers interested in exploring this campaign further and is highly recommended for a quick reference as well.