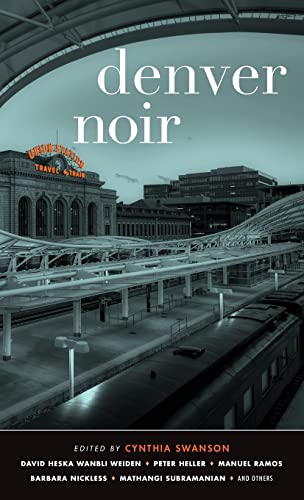 “Denver Noir is a fascinating exploration of this sunny city’s dark side.”

Denver is the Mile High City situated near the Rocky Mountains. A town built on fortunes extracted from gold and silver mines, where “[g]amblers and guzzlers, streetwalkers and sinners—all found their place in the bustling young town,” writes Cynthia Swanson, the editor of Denver Noir. Despite Denver’s “three hundred days of sunshine,” darkness abounds. Swanson “writes literary suspense, often using historical settings,” and her novel The Glass Forest “was noted by Forbes as being one of ‘Five Novels with a Remarkable Strong Sense of Place.’” As editor, she marshals this ability for creating an anthology with a “strong sense of place.” What makes Denver Denver? Is it the thin air? The airport? The impressive mountain views? The haunted park that used to be a cemetery?

Reading this anthology brought back memories of a family trip taken to visit relatives living in the suburb of Aurora. Despite the inevitable onrush of nostalgia, Denver Noir also revealed aspects of the city otherwise obscured by tourist brochures. Many stories highlight the lives of the Latino population, while others focus on the blight of gentrification.

“Tough Girls” by Erika T. Wurth takes place in the neighborhood of Lakewood. The story is told from the perspective of a Native American private investigator. The narrator is also a chain-smoker. The story follows the beats of a private eye tasked with finding a missing girl. In her mission, the narrator ingratiates herself with a pair of tight-lipped teenagers. “I pulled my pack out, lit one for myself, then offered Judd and Macina one. I guess that meant I was contributing to the delinquency of minors, but these two seemed to know what they were doing with their lives. And who was I to judge? I’d starting smoking at age twelve. So had my mother. And hers.” What starts off as a cynical interior monologue by a world-weary PI ends as a scathing indictment of the institutional racism and neglect of the reservation system. The passage is also written with an effortless elegance, the last two sentences hitting like dual punchlines to a particularly bleak joke. It also seems far more effective in relating its message (implicit, not explicit) than a hundred hand-wringing think-pieces.

In another story, “Sangre” by D.L. Cordero is a harsh critique of gentrification’s destructiveness on the Latino community, a combination of social critique, supernatural tale, and gender affirmation for the main character. Pronouns do matter. Cynthia Swanson’s story, “Pieces of Everyone, Everywhere” is historical fiction about the aforementioned haunted park. In this case, when the narrator’s gender is finally revealed, there are dire consequences. But the perpetrators get their comeuppance and the narrator triumphs over personal adversity. While this description is deliberately vague, it is important to savor the story’s manifold layers of deception and desperation. Spoilers, even minor ones, would ruin the experience.

Denver Noir is a fascinating exploration of this sunny city’s dark side. Mountain views, a roughneck Gold Rush past, and stories of murder and mayhem make this anthology a must-read for anyone curious about Denver and its environs. Like the countless entries before it, Akashic Books allows an editor to craft an anthology filled with stories varying in tone and perspective.