Demystifying Patanjali: The Yoga Sutras: The Wisdom of Paramhansa Yogananda as Presented by his Direct Disciple, Swami Kriyananda 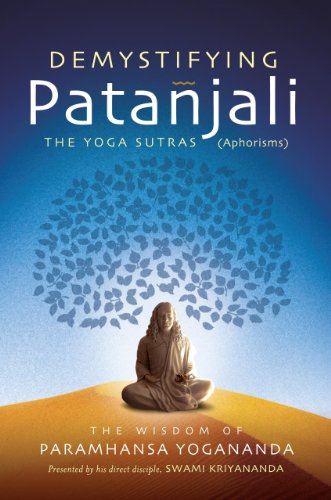 “Be calm within, no matter what happens to you. Allow nothing to affect your peace of mind.”
—Swami Kriyananda

Perhaps that’s the simplest way to summarize the wisdom of Patanjali, the sage who thousands of years ago presented a statement of principles for living, called the Yoga Sutras.

The Sutras are arranged in four padas, or books, according to the concepts of Samadhi (oneness with the divine), Sadhana (the way to Samadhi), Vibhuti (accomplishments/attainments), and Kaivalya (absoluteness).

Patanjali said, “These are the stages through which every truth seeker must travel, regardless of his religion, if he would achieve union with the Infinite.” And these are the stages that Swami Kriyananda determines to clarify in his latest book, Demystifying Patanjali.

Kriyananda-ji tells the reader that a person’s thoughts are influenced by his “level of consciousness; by others’ expectations of him; by the general level of consciousness in the country and the times in which he lives; by the food he eats, and by the places where, and the people among whom he eats; by the sun’s moon’s, and planetary positions in his horoscope; by his sex; by his past deeds and their influence, in turn, on his personality; even the present position of the earth in our galaxy.”

The author, a direct disciple of Paramhansa Yogananda (Autobiography of a Yogi), studied with his guru (teacher) for decades but maintains that it is ”important . . . to rely on one’s own understanding of what the guru has taught.”

And so Kriyananda-ji uses not only Yogananda’s wisdom to explain the Sutras, but also personal stories from his own lifetime. The tone is familiar, friendly, sometimes conversational. Matter-of-fact examples help to illustrate the metaphysical concepts. And there are even some expressions of skepticism about Patanjali’s aphorisms.

But as Swami Kriyananda states, “It is well in these matters to study the lives of great saints in all religions. All of them have declared that divine love alone, and divine joy, are the only realities, and the only thing worth seeking in life.”

In Demystifying Patanjali, most Sanskrit terms are explained in the text; the glossary is brief. The book is sufficiently indexed. In some cases, a Sanskrit/English version of the sutra is presented along with the commentary; however, this is inconsistent throughout the book and may or may not serve to clarify the ancient teachings.

With his wide knowledge base, the author references many sources of information, from the Bible to Einstein!

He also undertakes some discussion of Satan, something that’s not typically instigated in commentaries on the Yoga Sutras. There are also tantalizing mentions of topics such as mantram, pranayama, chakras, and astrological influence on yogic teachings, but without continued discussion, some readers may find these portions of the book to be challenging.