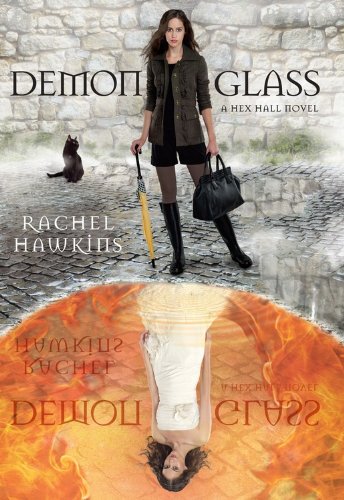 The lovable, snarky Sophie Mercer is back in Demonglass, part two of the Hex Hall series. When we last left off, Sophie was traveling to London with her father to get her powers removed in a preemptive strike against “demoning out,” despite the potential fatal consequences of taking such action.

Word has it that Archer Cross is also in England, having rejoined the Prodigium’s arched nemesis, The Eye, after the hot, smoldering kiss he and Sophie shared while on cellar duty at Hectate—moments before Sophie saw the damning, visual proof that exposed Archer as a spy.

With a broken heart and an uncertain future, Sophie embarks on the journey to London with her best friend and vampire, Jenna, and the gorgeous caretaker/warlock Cal. However grim the journey ahead may be, Sophie is already filled with a precognitive dread that the three of them will never return to Hectate.

Alone with her estranged father for the first time in years, Sophie and her dad begin working on their long-overdue relationship; and in the spirit of father-daughter bonding, Sophie agrees to keep her powers.

Staying at the stately Thorne Abbey with a handful of council members, Sophie is shocked to learn that two teen residents, Daisy and Nick, are also demons—despite past assurances that she and her father are the only two. As if news of additional demons isn’t surprising enough, Cal drops the bomb that he and Sophie are betrothed—and although there are worse things in life than being engaged to a gorgeous 19-year-old healing warlock, Sophie’s heart is still with Archer.

So with the mystery of new demons, trying to patch things up with her father, unresolved feelings for Archer, and conflicting thoughts of her betrothal to Cal, Sophie has plenty on her plate. To top it off, Sophie has to constantly be on the lookout for The Eye, who wants her dead.

Confused by a chance meeting with Archer—who saves her life—Sophie is stunned when the biggest betrayal comes from within her own circle of trust.

Protagonist Sophie Mercer is written with the perfect mixture of teen angst, sarcastic wit and self-assurance and she has no problem driving this fast-paced, action-packed tale of paranormal thrills. Along with Sophie, the reader navigates through the unchartered territory of unforeseen twists and turns, which transforms the landscape as each new dark secret is revealed.
Rachel Hawkins does it again. Flawlessly picking up where Hex Hall ended, Demonglass moves ahead without cluttering the plot with unnecessary or repetitive backtracking. After laying to rest the fears, questions and nail-biting concerns remaining at the end of Hex Hall, the reader is given a moments rest before getting swept up into an whole new level of turmoil and suspense.

In addition to her amazing writing prowess, one thing’s for sure, Ms. Hawkins has definitely cornered the market on cliffhangers.