A Demon-Haunted Land: Witches, Wonder Doctors, and the Ghosts of the Past in Post-WWII Germany 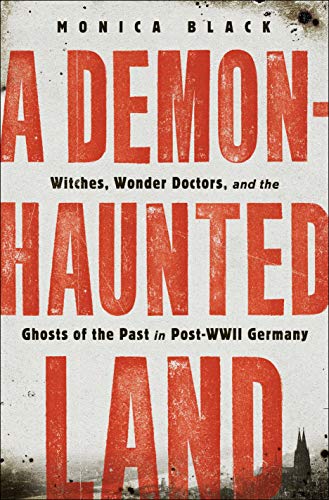 Hitler’s reign as dictator of Germany’s Thousand-Year Reich (that lasted 12 years) brought disaster to his homeland and to the rest of the world. The toll of the dead (50 million) and the destruction of cities surpassed any previous conflict.

The story of Hitler’s rise to power and his suicide in the bunker in Berlin is well known. In addition, his war caused psychic and physical injury to German inhabitants who avoided the slaughter, wounds that lasted long after the end of the armed conflict. Stories spread of the coming of the apocalypse. The German volk reverted to old answers to address their plight.

In A Demon-Haunted Land, Professor Monica Black of the University of Tennessee has told the story of one of the men who addressed the malaise, body trauma, and other injuries left over from World War II. Bruno Groning—a peculiar individual who called upon German nationals to cure themselves through rededication to Christ—consumed the public’s attention for a decade in post-war Germany. A faith healer, Groning addressed large crowds that flocked to him in search of cures and rebirth.

The destroyed nation had entrusted its fate to the warped philosophy of an evil clique of mad men. Devotion to Hitler was religious in nature. After the war, the population was left with a wrecked economy and diminished prospects for recovery. Many turned to faith healing to restore their physical maladies. Groning preached that sickness came from sin. Groning also supplied his flock with tinfoil balls said to have therapeutic characteristics.

Officials of the Federal Republic of Germany tried for years to stop Groning’s activities as practicing unlicensed medicine, but without success. Unlike many healers worldwide, Groning did not profit financially from his actions, and many deeply believed in his absurd methods.

Monica Black’s book turns midway into an exposition of witchery in post-war Germany. The Nazi regime left many persons with debts to repay. One way the injured could do that was by hurling accusations at former Nazis as witches. This was an age-old social phenomenon in Germany that fit perfectly into the post-war era.

Groning’s eventual downfall was the product of his success. His devoted followers included some who had abjured traditional medicine. When the Wunderdoktor’s methods did not work, the very ill suffered, and governmental authorities took notice. Eventually, almost a decade after discovering his spiritual power in a small village in West Germany, he was convicted of practicing medicine without a license.  Less than a year later, Groning met his own demise when he could not cure his own cancer.