Democracy: Stories from the Long Road to Freedom 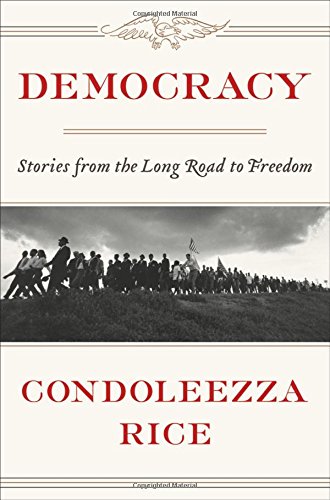 Condoleezza Rice, former Secretary of State, has worked for both presidents of the Bush clan, through the Gulf War and the Iraq provocation, and into the current presidential cabinet. You would think scintillating tales would abound, however the reader must dig deep in this nearly 500-page tome to find the sweet spots.

Rice has never been one to tell secrets, and unfortunately this book is no exception. Rice may have suffered from bad editing, because there is only a passing reference to Denise McNair, a childhood friend of Rice, murdered in a Birmingham church bombing, which had to have been a traumatic, life scarring experience. Maybe that is where she learned to compartmentalize.

If you are a student of history you can’t help but draw modern parallels as Rice does to the Stalin purges and current events in Syria. Other images of what could be the future of the U.S. are draw with more examples in Russia: rapid privatization, wealth transfer to new oligarchs, and plummeting disposable income for the general population. Not to mention suppression of religious minorities, and expansion of authoritarianism.

“In today’s interconnected world, the creeping and subtle authoritarianism of the illiberal elected leaders is a greater threat to democracy than if they were to crush it with tanks in the city square.” Thrillingly Secretary Rice speaks Russian and had met Putin when he was mayor of St. Petersburg, so this book shares some candid moments between them.

At times the book lacks vivid descriptions of events chronicled, describing a meal as scrumptious is neither descriptive nor interesting, especially when heads of state are involved.

Rice’s writing on the Ukraine comes alive with the reference to Gorbachev’s imprisonment in Crimea. Her astute Putin characterizations are both compelling and immediate. Rice’s rendition of the poisoning of Ukraine’s pro-west leader Yushchenko is riveting.

As well, Rice’s reflections on Africa, especially the corrupt nations and fledgling democracies, included the mention of the United National Convention Against Corruption bear review. Though the book is at times wonky, it is definitely readable for a motivated high school or university student.

Rice’s take on the Middle East sings, including, “The Lebanon War of 2006 began on July 12 and would go on for six devastating weeks, shaking the Levant yet again.”

There are also hilarious moments with clerics. Most amusing are the many anecdotes involving her disagreements with peevish Donald Rumsfeld, who was Secretary of Defense during the George W. Bush Administration.

Rice’s observation that the Kurdish communities are more free-market oriented and favorable to business elicits hope for the Kurds. Her musings on Middle Eastern despots are also worth a read, especially those on Mubarak. Her observations on Tunisia are instructive about the basic requirements for democracy to flourish and are of concern during the current administration. Effective imagery is used full tilt in her Middle East treatise, referring to journalists and administration critics as “hunted.”

At times, you would swear she is a Democrat, especially when one of the realities for a democracy to flourish, per Rice, is a “liberal-pro-democracy government.”

Rice also highlights the accomplishments of women leaders in the world, brave journalists, and educators who persevere under life threatening circumstances.  Her description of modern day Iran draws a clear parallel to the current administration, “aging men head the theocratic regime, with the base of support outside the cities, mostly older people, the less educated, and rural populations.”