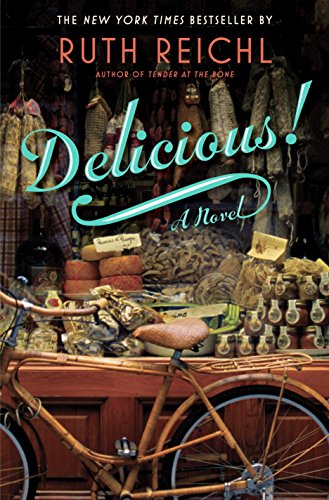 "A commendable, but highly saccharine and overreaching literary effort..."

Famed New York food critic and former Gourmet magazine editor in chief Ruth Reichl (Garlic and Sapphires: The Secret Life of a Critic in Disguise) makes her fiction debut, channeling a little bit of herself into the novel’s main character: foodie and aspiring writer Billie Breslin.

Dropping out of school after landing her dream job at the world famous gourmet magazine Delicious!, Billie Breslin is excited to work for the incomparable Chef Jake Newberry and looks forward to the day that she’ll write her own features.

On her first day of work, Billie makes friends quickly, amazing everybody with her incredible tasting ability that can detect even the most obscure spice, as she quickly breaks down any dish.

Billie, like all of Jake’s assistants before her, is put through the secret test of curiosity, directed by Sal Fontanari, owner of the highly revered Fontanari’s cheese shop. Billie spends about an hour with Sal walking the streets of New York City where gourmet chocolate shop owners fall over themselves to ply Billie with samples of their sweets, and top butchers allow her a never-before-seen look at their craft.

The tour culminates with a cheese tasting at Fontanari’s where upon tasting a chunk of the spring Parmesan Billie notes that it fills her mouth with “the hopeful taste of fresh green grass and young field flowers welcoming the sun,” while the autumn cheese's richness evokes “the lush fields of late summer, just as the light begins to die.” By the time she gets to the winter Parmesan she scores a job offer from Sal—the first time a non-relative is ever allowed behind the counter—all because she could detect notes of hay.

Not long after Billie is at the magazine Jake asks her to write a feature on the adamantly PR reclusive Sal Fontanari—who miraculously makes an exception and allows her to write the piece.

At first she's at a loss of how she could ever do Sal justice, but following an amazing, multicourse Thanksgiving meal prepared just for her by the savvy travel writer Sammy, it all just comes "pouring out,” from evening to sunrise, stream of consciousness, with nary an edit or a rewrite before it's emailed straight to Jake, who of course is floored by its brilliance—especially after he learns she hasn't been working on it for weeks, but just a few scant hours. Simply genius!

Yet despite all her luck, the magazine is suddenly and inexplicably shut down. With everyone else out of a job, Billie is asked to stay behind to honor the Delicious! money back guarantee. Left to her own devices she finally gains entry to the mysteriously locked library where she finds letters written by a 12-year-old girl named Lulu to the legendary James Beard during WWII.

Captivated by the letters, Billie is on a mission to solve the mystery of Lulu, and perhaps, in the process, find a way to come to terms with her own issues that will allow her to finally realize her full potential.

Billie Breslin is larger than life. From her amazing, unrivaled palate to putting words on a page, or her first attempt at creating fashionable outfits, there's nothing she can't do. Her inherent, always effortless skills never fail to result in gushing accolades, awed admiration, or job offers—and that’s just within the first five minutes of meeting her. While you want to like her, you find yourself getting a toothache.

Though it helps that Billie doesn’t believe her own press, she does overplay her insecurities. Her tendency to be overly humble and constantly playing the wallflower—it was her sister Ginny who had all the stunning beauty, brains, and incomparable talent, after all—fails to lessen the unrealistic exaggeration of her character.

Although the book begins as Billie's journey to finally step out of the shadow of her sister through food and writing, it soon morphs into Lulu's story, tediously parsed out through her letters, which can only be found after solving a librarian's laborious secret code; this, along with dry snippets of food history, quickly wears thin.

A commendable, but highly saccharine and overreaching literary effort, requiring the reader to have great patience and persistence for very little reward.