A Delicate Truth: A Novel 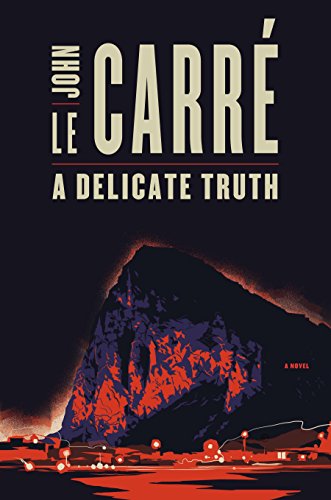 “A Delicate Truth is in truth a morality play.”

As the Twilight saga has its teams, Team Jacob and Team Edward, there are also teams for spy/action/adventure novels. The two best known are Team Clancy and Team le Carré.

Team Clancy fans cheer for uber-patriotism and advanced technology. Team le Carré fans are darker in spirit, rooting for quirkiness, individuality, and moral ambiguity. They are more akin to the fans of the character of Snape in the Harry Potter series.

As A Delicate Truth opens we are introduced to a character we are led to believe will be of major importance, though by chapter close we know little about him, not even his name. We know his alias, something he’s not too keen about having. “Paul” as we know him by, is in his late fifties, a civil servant in the Foreign Service, lacking all experience with the “cloak and dagger” stuff.

Of Paul’s backstory we don’t know which if any of the details given will be important. We learn his wife has had cancer and as a consequence Paul has been restricted from travel, preventing opportunities for career advancement. Now with his wife in remission and his adult daughter back home to help, Paul is again free to travel.

Paul’s assignment will send him to the British crown colony of Gibraltar. There his role is to be the eyes and ears of a junior Member of Parliament, Fergus Quinn. Quinn is both privileged and progressive—a high flyer with ambition. Paul and Quinn do not meet until the moment of Paul’s assignment. Paul’s first question to Quinn is, “Why me?”

That particular question is not answered, at least not in this chapter.

As noted, Paul is unhappy about having alias. First, his cover is thin: a statistician traveling to a conference with a hobby of bird watching (presumably to explain his binoculars). Second, he worries about running into someone who knows his real identity. If he kept is real identity to begin with, a British civil servant in the Foreign Service, he could travel anywhere in the world without suspicion. Despite how “iffy” the setup, it would be improper to turn down a mission offered by a Member of Parliament.

More details are given. The mission, code-named “Wildlife” is to kidnap an arms merchant, “Punter,” who has been selling advanced weaponry to Al Qaida. Punter’s go-between is “Aladdin,” a well-paid informant, though we discover by means of remote listening devices and tapped phones that Punter seems to be more interested in good food, good wine, and replacing his dull mistress with a more exciting one.

The more dangerous aspect of the kidnapping is to be handled by a joint British-U.S. mercenary team. Of the Americans we know very little. We are told the British soldiers are working “off the books” having officially resigned their commissions, and the mercenaries are employed by an outfit called “Ethical Outcomes,” which in turn is owned by a larger holding company. We also learn the names of the British military commander and the mercenary leader, and these names strangely enough are not aliases.

Because the mission is held on British territory the final go-ahead must be given by Paul, and as there is no omniscient narrator, we don’t know what Paul doesn’t know. When Paul overhears only half of a phone conversation the reader also overhears only half. Mr. le Carré’s style generates the same feeling you get when you see a movie using a “shaky-cam”. There is a “you-are-there” immediacy allowing the characters little opportunity for self-reflection.

The chapter closes with Paul positioned in a command center across from the meetinghouse watching over video monitors. Paul is connected to Quinn by encrypted cell phone and as events unfold things do not seem quite right.

At the very last second Paul and Jeb object to committing British forces—Is Punter even at the meetinghouse? A shadow fleetingly seen in a window might or might not be him. Elliot is pushing hard for Paul to say “go.” It’s now or never—over the phone Quinn cancels Paul’s objections in a manner that suggests a threat. The soldiers rush out. There’s a muffled explosion, gunshots. The video monitors go blank. Paul is hurried out and away.

Was the operation a success?

This first chapter was published by The New Yorker prior to the book’s release. If you can get your hands on the magazine excerpt, do so; you won’t be disappointed. The two versions are significantly different and the reader gets to see Mr. le Carré fine-tuning character development and dialog. The book’s first chapter was shortened compared to the magazine’s by removing a character’s introduction. The reader will also get to see imperfect “stitching.” A conversation in a later chapter refers back to a conversation that’s been cut.

The second chapter of A Delicate Truth begins with a new character, Toby Bell. Toby is also a civil servant in the British Foreign Service but in his mid-thirties, decent, modest, and ambitious. The reader is provided just enough to figure out that Toby is not “Paul” but not enough to see the connection between the two.

The first hint comes when we learn that Toby has been promoted to Quinn’s secretary. Over time an increasingly secretive Quinn is seen to be cutting Toby out of Quinn’s schedule. At a conference in Belgium Quinn pleads too sick to attend a meeting but is seen later by Toby sneaking out of the hotel to go to another.

What’s going on? The reader and Toby get to connect the dots together.

It should not be too much of a spoiler to point out the conspiracy includes a wealthy fundamentalist Texas widow, a conservative evangelist, corrupt defense contractors, corrupt police, and murderous thugs. They are funny-bad and don’t have much depth as characters, but that doesn’t seem to matter.

A Delicate Truth is in truth a morality play.

Mr. Le Carré’s moral stance is voiced through Toby who criticizes Tony Blair’s government in its run up to the Iraq war. Toby also rhetorically asks if there’s a difference between the man who applies the electrodes and the one who sits behind a desk pretending he doesn’t know “although he knows very well.” In case the reader is too thick to recognize a rhetorical question, Toby also gives us the answer, “No.”

Moral commentary is threaded throughout and includes: the statement that power and secrecy corrupt individuals and governments, La Rochefoucauld’s maxim “hypocrisy is the tribute vice pays to virtue” and a nod to Ariel Durant’s “banality of evil.”

In the acknowledgements Mr. le Carré provides the reader a parting gift with references to individuals and organizations that promote government transparency. These include Anthony Barnett of openDemocracy and Clare Algar of Reprieve—individuals whom Mr. le Carré tells us have personal experience with the consequences of speaking truth to power.

There’s more. A Delicate Truth was this reviewer’s beach read, which was serendipitously followed by Kurt Vonnegut’s Galapagos. I was struck not so much by the two books’ differences but believe it or not by their similarities. Both books are morality tales—where Mr. le Carré refers to Ariel Durant, Mr. Vonnegut gives us a quote from Anne Frank. In reading moralists, cynics, and fantasists on the order of Mr. le Carré and Mr. Vonnegut, one discovers not just entertainment but also the sugaring of bitter pills.

The differences come from each author’s level of cynicism. Mr. Le Carré seems a cheerful optimist compared to Mr. Vonnegut, and where Mr. le Carré believes that greater openness leads to better government, Mr. Vonnegut believes that it is much too late—too late even for the human race. Humans using their brains is the problem, not the solution—having big brains simply makes lying easier, and Mr. Vonnegut proposes that to survive, humans must devolve.

Some of the fun of reading a new novel is imagining selecting the actors for the movie to follow, which for A Delicate Truth is as sure day follows night. Hugh Grant would be perfect in the role of “Paul.” And one final note: The pacing of A Delicate Truth puts greatest dramatic tension near the end, something that would be ruined if the book were read from back to front—so don’t even think about it.