Deliberate Cruelty: Truman Capote, the Millionaire's Wife, and the Murder of the Century 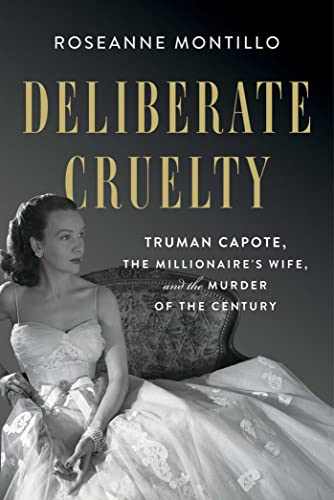 With the grit and determination to overcome very similar hardscrabble backgrounds, Truman Capote and Ann Woodward both rose to pinnacles in New York’s glittering mid-century high society. But overcoming such comparable odds didn’t make them fast friends. Instead, Ann’s coarse description of Capote’s sexual orientation turned him into a virulent foe. Eventually, each would plummet, losing friends and their reputations.

Their paralleled rise and fall is chronicled in Roseanne Montillo’s Deliberate Cruelty: Truman Capote, The Millionaire’s Wife, and the Murder of the Century, a juicy true crime tome that takes us into the lives of headliners of the time such as the Duke and Duchess of Windsor, Lee Radziwill, Claus von Bulow (who would later be accused of attempting to murder his wife), and Babe Paley.

For Ann Eden, her romance with Billie started so well. She worked the midnight to 3:00 a.m. shift at Felipe’s, a popular Manhattan night club, performing in a white bathing suit, black fishnet stockings, and high heels. Admirers would invite the dancers to their tables for a cocktail and, possibly, negotiations. There were rumors that Ann was available for more than just drinks and Billie, the handsome heir to a banking fortune, was an attentive beau, who showered her with gifts. There was one drawback: He was married, and she was just a showgirl with a bad pedigree for those who keep score of such things.

But Ann’s beauty and moxie was such that she negotiated for more and ultimately landed one of the biggest matrimony catches when she and Billie wed. But this was no Cinderella marriage despite the expensive homes, extensive wardrobe of designer duds and fur coats, and invitations to soirees packed with a who’s who of upper crust New Yorkers. Ann often felt an overwhelming sadness which she treated with the use of tranquilizers. It wasn’t a good mix with the cocktails she and Billie also overly imbibed. The couple was known for their stupendous, alcohol-fueled rages.

The night Ann shot Billie had proceeded along those lines. Returning from an exquisite party where the candles were soaked in Chanel Number 5 and the table set with silver and the finest China, the two returned to their 43-acre estate and retreated into separate bedrooms. Waking up an hour or so later to the sound of a crash, Ann reached for the shotgun she kept nearby. A burglar had been breaking into houses in their rich neighborhood and Ann, as she would tell police, thought they were being robbed. She fired twice—and only then realized she had killed her husband.

Was it a deadly mistake? Or had Ann purposefully fired, knowing it was Billie? After all, if he divorced her, she might lose everything. As his widow, she could maintain the wealthy lifestyle she had struggled so hard to achieve. Billie’s family and friends thought they knew.

As for Capote, he was still riding high on the success of In Cold Blood, which ironically is credited as being the first in the now burgeoning true crime genre. Ann was cleared of her husband’s murder, but Capote was on her trail now. It wasn’t going to be pretty.

“Both were vulnerable and mean,” writes Montillo in the prologue to her book. “Both were familiar with violence and the violence that caused the death of Billy Woodward would, as recounted by Truman Capote 1975, incite fresh violence that would ultimately destroy them both. What began with insults in Saint Moritz would end in death for one and ignominy for the other.”