Delayed Rays of a Star: A Novel 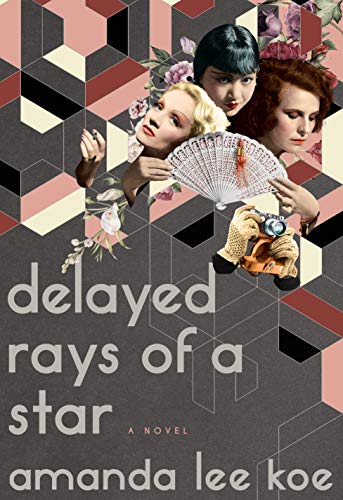 “Blurring the line between history and myth, Delayed Rays of a Star is encyclopedic in its detail and fit to bursting with invention.”

In the annals of impromptu celebrity photographs, Alfred Eisenstaedt’s snapshot during a high-society Berlin party in 1928 ranks among the most arresting. At the time, neither he nor anyone else present could know that the subjects of his casual photo—Marlene Dietrich, Anna May Wong, and Leni Riefenstahl—were destined for immortality.

All three women were at pivotal moments in their lives. Dietrich would soon find fame as a movie star of the highest magnitude, Wong was an Asian-American actress encountering uncommon success, and Riefenstahl was on the verge of becoming a trailblazing filmmaker. Yet history has little to say about the trio’s fateful meeting that night, or their subsequent encounters in the following decades. Amanda Lee Koe imaginatively fills that void in her kaleidoscopic Delayed Rays of a Star.

Blurring the line between history and myth, Delayed Rays of a Star is encyclopedic in its detail and fit to bursting with invention. Mixing fact with fiction is nothing new for Koe; her previous short story collection, Ministry of Moral Panic, was a lively inquisition of Singapore’s past and present, seen through the eyes of locals, expats, and dreamers.

Delayed Rays of a Star marks an ambitious step forward as she concocts an expansive, criss-crossing narrative that somersaults back and forth in time, from Weimar-era Germany and old-time Tinseltown to Paris and China in the 1990s. At the epicenter are Dietrich, Wong, and Riefenstahl, navigating a 20th century wracked with war, societal pressures, and the ever-shifting fortunes of show business.

Delayed Rays dramatizes incidents from its divas’ lives (including Marlene’s one-night stand—make that a half-hour stand—with JFK) with a sympathetic feminist viewpoint, while imagining fortuitous meetings, calamities, and epiphanies. Each member of the trio is afflicted by the burdens set by their gender, ethnicity, and affiliations. Marlene is labeled a traitor when she abandons Germany for Hollywood during World War II. In her pursuit of artistic greatness, Leni allies herself professionally with Adolf Hitler (whom she refers to as “H”), a move that proves disastrous to her post-war career. Born and bred as an American, Anna May is typecast in stereotypical Asian roles, and yet is told that she is “too Chinese to play a Chinese” when a rare meaty lead part becomes available.

As the novel’s title (drawn from a Rilke poem) suggests, Dietrich, Wong, and Riefenstahl form the luminous core of the story, but their glow reflects off a large cast of supporting characters. Among the devoted, doomed and often flummoxed real-life men who float in and out of the women’s lives are the mercurial Josef von Sternberg (who directed Dietrich and Wong in the classic Shanghai Express), Jewish cultural critic Walter Benjamin (who can only write about Wong in terms of the orientalist attitudes of the time), and Joseph Goebbels, Hitler’s Minister of Propaganda (who becomes Riefenstahl’s prickly rival).

Running parallel with these momentous contretemps are more fictional flights of fancy, in which Koe conjures up a multinational set of characters: Bebé, an illegal Chinese immigrant who becomes Dietrich’s maid during the actress’s waning days; Hans, a closeted gay Austrian soldier hired to work on the set of Riefenstahl’s star-crossed epic Tiefland; and Ibrahim, a disenfranchised German radical of Turkish descent given to listening to Morrissey and prank calling Dietrich, just to recite poetry to her. While their misadventures tend to be less gripping than the exploits of the novel’s central trio, they all represent Koe’s central preoccupations with sexual identity, the crossing of political and personal boundaries, and how fate and blind chance intermix.

Immense in scope, peppered with conversational musings, and touched by melancholy, Delayed Rays is patterned like one of Dietrich’s famous emeralds as our views of its characters are refracted by the changing times, and we circle them much as they circle each other. Bloodied they may be by history, but they emerge unbowed, particularly the defiant Riefenstahl, who is granted the opportunity to justify her actions in her own words, in the novel’s only shift into first-person narrative.

Much like the divas she writes about, Koe’s novel struts flamboyantly all over the map, yet what lingers is the heartbreaking grandeur of her protagonists’ existences. Like the stars in Rilke’s poem, they have burned out, but their light persists, and Koe has fashioned a worthy tribute to their enduring impact.