Degrade and Destroy: The Inside Story of the War Against the Islamic State 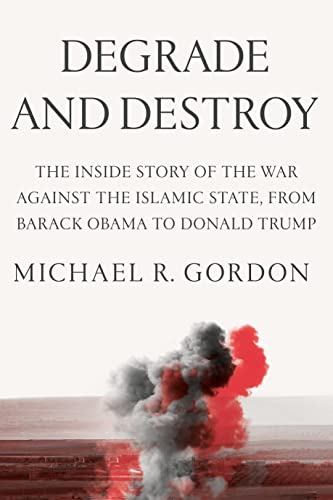 “Michael Gordon provides a masterful combination of strategic analysis, a study of command, and a combat narrative to create a comprehensive and at times disturbing account of the fight against ISIS.”

This book is the capstone volume of what should be the standard four-volume history of America’s military campaigns in Iraq, beginning with Operation Desert Storm and concluding with Operation Inherent Resolve, the effort to defeat the Islamic State. Author Michael Gordon provides a masterful combination of strategic analysis, a study of command, and a combat narrative to create a comprehensive and at times disturbing account of the fight against ISIS.

The book begins with the Obama Administrations efforts to extricate the U.S. from any military presence in Iraq, a major pledge in his 2008 Presidential campaign. Unfortunately, without the stabilizing presence of U.S. advisors, the heavily partisan Iraqi Shia Prime Minister, Nouri al-Maliki, begins a de facto persecution of the country’s Sunni militias and government officials, key to the success of the American-led surge of 2007–2008. This sectarian paranoia laid the groundwork for the resurgence of ISIS, fueled by the beginning of the Syrian Civil War in 2011 and the power vacuum it created in eastern Syria.

Gordon does an excellent job of describing the strategic incoherence of the Obama Administration’s response to ISIS as it sweeps over the border into Iraq, capturing vast swaths of territory in eastern Syria and western Iraq, conquering the major Iraqi city of Mosul, crumbling the Iraqi Army, and approaching the gates of Baghdad, capturing cities like Fallujah and Ramadi that were scenes of success against Al Qaeda in Iraq only six years earlier.

Caught offguard by the scale of Iraqi defeat, Obama reluctantly creates a new international coalition to stop ISIS, insisting on minimizing the presence of American ground troops and determined to fight an economy-of-scale war. Gordon, who traveled extensively to the region during this time and attended multiple high-level meetings with American generals, diplomats, and politicians, describes the constant machinations the American forces on the ground had to endure to not only get their Iraqi counterparts to fight, but navigate the labyrinth of regional and domestic politics concerning how many U.S. troops, planes, and drones could be brought to assist in the brutal urban combat to retake Iraqi territory.

The book describes the tough street fighting needed to recapture ground lost to ISIS, particularly the extended campaign to recapture Mosul that took nearly a year and left large parts of the city in ruins. Once this campaign was completed and ISIS was finally driven back from Iraq, the second and more complicated phase of the campaign began: defeating ISIS in eastern Syria.

The campaign begun by the Obama Administration and continued by the Trump Administration in Syria was infinitely more complicated than the situation in Iraq. Although the U.S. had to navigate the bazaar that was Iraqi politics and deal with the significant Iranian presence in the country, both politically and militarily, the situation in Syria was a labyrinth of competing interests and stakeholders, which Gordon sorts out with remarkable and welcome clarity.

The Assad Regime, Syrian anti-regime forces, Iran, Russia, Turkey, Iraq, Israel, the semi-autonomous Kurds in both Iraq and Syria—all had interests that sometimes intersected and sometimes were in conflict with the U.S. effort to defeat ISIS, often simultaneously. As the fighting in northeast and eastern Syria heated up in 2018 and 2019, Gordon shows just how complicated the situation became, particularly between the U.S. and Russia, which ended up with U.S. forces engaging and destroying a convoy of Russian private military contractors in early 2018, the first time U.S. and Russian forces exchanged fire since the Cold War.

As the Trump Administration tried to wind down the U.S. military effort after the final ISIS urban stronghold was eliminated, the convoluted political situation remained, with Russian forces still in Syria, Turkey still occupying some northern portions of Syria, the issue of Kurdish autonomy in both Iraq and Syria unresolved, and ISIS no longer a so-called caliphate but still very much a capable terrorist organization. The incoming Biden Administration has now continued the effort to extricate the U.S. from the region once more, significantly downsizing the U.S. military presence and trying to once again switch to a purely diplomatic effort in the region. How successful this will be in the long term remains to be seen.

Finally, Gordon offers some keen insights into the problems of fighting the kind of counter-insurgency efforts undertaken by the U.S. these last 20 years, particularly the challenges of working with local partners, either government or otherwise, that often have competing agendas. The often-irreconcilable tradeoffs to maintaining the balance of power that are required will continue as the situation in the region remains on a low simmer with the most significant issues between the Assad regime and its opponents and the role of Iran in the region still unresolved

As the 20th anniversary of Operation Iraqi Freedom looms, the histories written of these wars by Gordon and his earlier collaborator, retired General Bernard Trainor, are outstanding examples of military history written without hyperbole and with the immediacy of an on-scene observer who had first-hand access to many of the significant decision makers and participants.