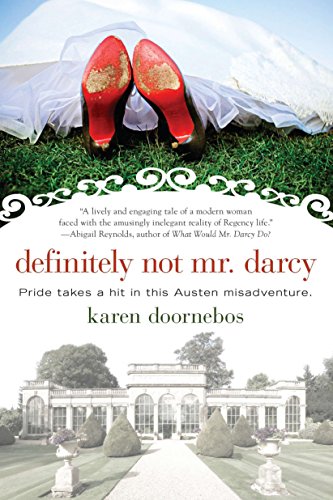 “Definitely Not Mr. Darcy is entertainment in its purest form, a skirt-flying tumble of a story, and an excellent, lighthearted way to while away a quiet afternoon.”

During the rise of the contemporary chick-lit genre, an entire sub-category has evolved around the cult of Jane Austen. The poor dead author has been re-imagined into a sleuth, cavorted with zombies, written dating rules, and inspired many a writer to invoke her romantic and witty spirit in contemporary fiction. These novels have drawn hoards of readers fascinated by a woman who lived in an era before casual hook-ups, when invitations came on embossed cards, and a man had to propose marriage before the first kiss.

Falling smack in the heart of this popular category, Karen Doornebos’s debut novel, Definitely Not Mr. Darcy, is a frothy story of an Austen-obsessed American thrown into a reality-dating show set in 19th century England.

Chloe Parker is a 39-year-old divorced mother whose printing business is failing. With her ex-husband soon to be remarried and threatening to bring her back to court over custody issues, Chloe decides to use her knowledge of the Regency era to try out for a Jane Austen-inspired TV documentary. She’s chosen for the show only to discover that it isn’t a documentary at all, but rather a dating show already in progress. Here, on a picturesque English estate, women vie for the affections of a certain Mr. Wrightman, a man of title and fortune who, of course, “must be in want of a wife.” Only the woman he chooses will receive the $100,000 prize.

Let the fun—and the catfights—begin. The older and somewhat reluctant Chloe must vie against much younger, more accomplished and ambitious women, all for a man who takes her breath away. The ladies spend their days making ink, fixing quills, dancing and practicing archery in an attempt to gain “accomplishment points” in order to earn a few hours with the hunky hero. Though restricted by corsets, bad hygiene, and draconian etiquette rules, Chloe manages through good-heartedness and a bit of luck to attract the attention of Mr. Wrightman—as well as his impoverished younger brother.

But the further this romp progresses, the more it wobbles on its reality axis. The “accomplishment points” the ladies work so hard to earn are airily waved away, along with many of the rules of this hazily constructed competition. Chloe behaves more like a single woman in her twenties than a 39-year-old divorced mother, but she’s not the dimmest bulb in the crowd. Even the contestant with the most intimate knowledge about the family and the estate somehow doesn’t pick up on the show’s crucial twist—as the reader certainly will.

Dear Reader: Shrug off the details and enjoy the ride. Even Jane Austen read bubbly French novels now and again. Definitely Not Mr. Darcy is entertainment in its purest form, a skirt-flying tumble of a story, and an excellent, lighthearted way to while away a quiet afternoon.