The Defining Decade: Identity, Politics, and the Canadian Jewish Community in the 1960s 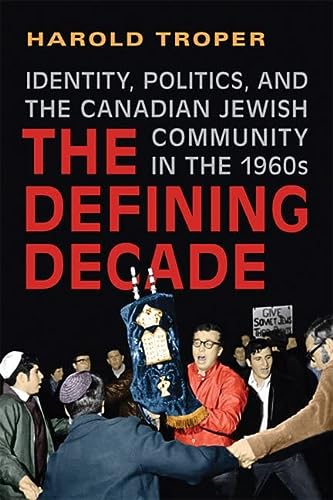 Although the title includes the words, “in the 1960s,” it should be noted that this book is a full-blown examination of Canada’s Jewish experience in its entirety. Author Harold Troper delves definitively into the 1960s, a period of significant unrest and cultural transformation, while describing and analyzing the complete history of Jews in Canada for context. This book would be less valuable without Troper’s detailed examination of the history of the Jewish experience in Canada, a price the reader must pay for context and critical perspective.

In The Defining Decade, Troper has produced a definitive analysis of the diversification, assimilation, revision and perceptions of Canada’s Jewish community. Troper carefully scrutinizes the Jewish communal attachment and involvement with Canadian society.

In prior centuries, Canadian Jews represented little more than a small religious sect that tended to congregate in cities (primarily Montreal and Toronto) and who remained largely segregated and autonomous. They faced varied and significant barriers to participation in Canadian society, compared with their gentile neighbors. But the 20th Century, particularly the years following the Holocaust, produced a sea change for the Jews of Canada. Significant Jewish immigration from Europe and the Middle East created a vast, new category of Canadian Jew, less willing to assimilate than existing Canadian Jews. This was followed by immigration of Russian Jews, again delivering their own unique cultural diversity. All of this change came to a head in the 1960s, at the same time as the American social and cultural revolution.

The decade of the 1960s, along with new liberal laws, opened doors for Canadian Jews and created opportunities for societal engagement that did not exist in the past. In prior decades and centuries, Jews were excluded from the higher echelons of Canadian gentry, including government and social integration. Rather than conceal their ethnic and religious heritage, Canadian Jews of the 60s openly proffered it and they discovered surprisingly little resistance. Yet, despite these new opportunities, Canadian Jews also faced a plethora of obstacles from outside, including a new wave of anti-Semitism, along with anti-Israel sentiment. From within, it brought the dangers of assimilation, including intermarriage and reduced adhesion to orthodox constructs. Steadfast in its proud heritage, Canadian Jews increasingly found themselves fragmented and disparately opinionated.

Troper explores how the concept of Jewish pluralism and social justice was viewed with merit by 1960s Canadian society, already fairly liberal, even by American standards. The decade of the 60s was one of significant transformation. Some of the issues Troper examined continue to exist, including anti-Semitism, the role of Jews in separatist Quebec and concern for Israel. Troper concludes that the 1960s produced a Jewish community that was (and remains) distinctive, confident; politically and socially engaged.

The 1960s delivered a new Canadian Jewish identity, focused on activism and multi-cultural commitment. And, if the liberal, assimilating decade of the 60s brought about an increase in intermarriage and a decrease in commitment to the rigid religious structures of the past, the Six Day War produced an awakening and intensification of Jewish identity. Just two decades after the Holocaust, Canadian Jews experienced a renewed pride associated with being Jewish and an intense identification with the perils facing the State of Israel. As with Jews around the world, this bonding with Israel was a new, intense, emotional and enduring condition. It occupied and influenced their intellectual and emotional Canadian Jewish experience.

Troper has drawn upon a vast collection of interviews and historical records as context for The Defining Decade. His references, sources and pictures provide added layers of valuable information. If one can say anything negative about this book, it is in Troper’s deep commitment to the minutia of detailed data. Perhaps the reader cannot sufficiently appreciate the topic without a meticulous comprehension of prior events.

Troper’s examination of the Canadian Jewish experience in the 1960s is delicately detailed, requiring some patience and perseverance on the part of the reader. In return for this patience, the reader is awarded with an outstanding explanation of the transformation of Jews in Canada, from its origins, through the 60s and into the future.