Deepest Waters, The: A Novel 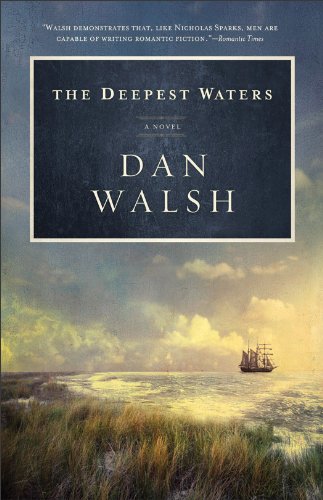 Dan Walsh is no one-hit wonder. His first book, The Unfinished Gift, a marvelous story set during WWII about a little boy who finds himself in the midst of a family tragedy, was a heart-warming tale. The sequel, The Homecoming, proved that the author is truly a gifted writer who has the ability to carry his readers back in time as he recreates places and characters that make us think we are reading a true story rather than fiction.

His third book, The Deepest Waters, continues along that same theme. Walsh obviously researches his historical settings well, ensuring his characters’ milieu is appropriate for the time, and then develops interesting, compelling characters who endear themselves to the reader.

In Waters, the author weaves a nautical tale set in 1857. Newlyweds John and Laura Foster board a steamship and embark on what appears to be a fairy tale honeymoon—it turns out to be anything but. Their ship sails into a hellacious hurricane and sinks. As is the custom at sea, women and children are evacuated from the sinking vessel first, causing the just married couple to become separated. Laura finds herself in one of the ship’s few lifeboats.

She and her fellow shipwrecked women and their children are rescued by a passing vessel, while John and a handful of men are adrift on debris from the sunken ship. During the night, the rescue ship containing the women and children drifts further away from the men who continue to cling to whatever piece of wreckage they can, until finally the men in the sea disappear from view.

As the story develops, we see how the human spirit has the capability to endure heartbreaking events and still have the strength to soar out of the depths of despair. John finds himself sharing a piece of wood with two other men. The trio face myriad challenges, each man taking turns riding the waves as well as a roller coaster of emotions. The scorching sun and lack of drinking water causes their will to live to diminish with each passing day. The men must rally each other to continue to believe they will be rescued, despite seemingly hopeless odds against it. They discover that faith can be as deep as the deepest water in the ocean.

Laura, although saved, faces her own challenges amid a ship full of strangers, all of whom have lost everything. Despair is the overriding theme, even though they’ve been plucked from almost certain death. But she doesn’t want to believe her husband, John, is truly gone, and so busies herself with helping the other women onboard. Their journey is long and arduous, and strains the ship’s food supply to the point of having only enough for one more meal.

While Walsh does a great job of developing John and Laura Foster, two enjoyable character, the most compelling character is a slave named Micah. In a delightful twist of irony, this man who is barely considered human because of his slave status, has the biggest impact in the story.

Without knowing he is doing it, Micah demonstrates to his master, the other ship hands, and to the rescued women, the value of faith. In a conversation with Laura, he tells her that despite all he has endured—beatings, loss of his family and his freedom, he knows that man can only enslave his body, not his spirit. He tells Laura that if in his heart he is free, then no man can make him a slave. Powerful stuff.

Usually not a big fan of historical fiction, I find myself enjoying reading it when Walsh writes. His ability to take the reader back in time is magical, while simultaneously teaching us about that particular time and place in history. His description of the ships and of 19th century San Francisco and New York are fascinating. The attention to detail is spot on, including carriages and shops, shorelines and harbors, and Walsh does it without the reader having to question whether the setting is historically correct. Well done.

The Deepest Waters, like his first two novels, is first-rate. Walsh is a new author who transcends many genres and will appeal to both men and women. He writes books that refresh our spirit and give us hope that all is not lost in a world filled with danger and threats of destruction. His characters demonstrate the goodness in mankind, but the author does not shy away from including those who have gone to the dark side.

His ability to weave romance throughout his work will attract many readers who enjoy wholesome stories with a redeeming theme. His stories will bring tears to your eyes as he reaches into the hearts of his characters, allowing them to emote passion and sincerity. He had me searching for a tissue on more than one occasion, reminding me of what the great Robert Frost once said: “No tears in the writer, no tears in the reader.”

Dan Walsh must certainly have a box of tissues next to his computer as he writes. Grab the Kleenex if you plan to read this well-written novel.