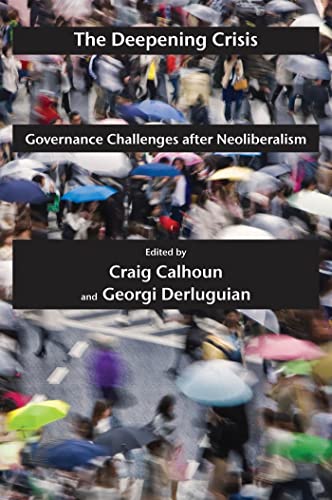 “The Deepening Crisis is an ambitious book but it falls short on delivery. . . . ‘You are right but it is different’ is the feeling one is left with after finishing the book.”

This is the second volume of the Possible Future Series launched at the World Public Forum in 2008 with the goal of documenting scholarly thought about the challenges faced by modern societies, our economic and political systems.

The Deepening Crisis focuses on issues of governance: How will or should the financial crisis of 2008 and its aftermath impact on politics and policy?

Briefly, the answers provided by some of the best-known sociologists and political scientists of the present are as follows:

• There is no technological fix to the challenges posed by climate change, argue William Barnes and Nils Gilman. Reducing greenhouse gas (GHG) emissions can only be achieved through a significant reduction of energy consumption.

Ecological modernization and sustainable development are passé—they might have worked immediately after the WWII but will no longer. An alternative political economy is needed based on civic republicanism and solidarity, a quasi-enlightened liberal communitarianism or what the authors prefer to call a Green Social Democracy.

• Michael J. Watts is concerned that the African continent will bear the biggest burden of the present environmental and energy crisis. Since colonial times, and aside from being massively exploited, Africa has been used as a “living laboratory” (a term borrowed from Helen Tilley’s book of the same name) or as proof that environmental deterioration is inherent in development and accentuated by overpopulation, imperfect markets and the lack of infrastructure.

Today this narrative is giving way to “a new language turning on socioecological resiliency and adaptive community institutions.” The resiliency discourse no longer casts doubt on our present economic and development model. Instead, it encourages adaptation to risk. According to Watts, this is equivalent to a cynical and life threatening transformation of the African farmer into “a hedge-fund manager for his own impoverished life.”

• Roger Brubaker explores the question why the present economic crisis is not bringing about social unrest and ethno-political conflict. The chapter was obviously written prior to the uprisings in Arab countries and the social unrest in EU countries faced with austerity measures. Economic crises, he argues, do not cause nationalism, rather they accentuate existing categorizations of insiders vs. outsiders and this will sometimes, but not always, lead to xenophobia or protectionist policies.

• Is there a link between economic crises and security crises? This is the question posed by Mary Caldor. Following a review of the theories of Schumpeter and Kondratieff on long economic cycles, she argues that the financial crisis of 2008 was not alone the result of our excessive faith in markets but also the result of the failure of neo-liberalism to provide the institutions necessary for innovation based on emerging technologies.

Moreover, it has to do with the multiplication of insecure spaces around the world and the persistence of the US-dominated 20th century techno-military paradigm that views conflict (and war) in “classic Great Power terms.” The way out of our present crisis lies in institutional change that capitalizes on new information technologies whilst placing human security and civil-military cooperation center-stage.

• Vincent della Salla joins the many other European voices lamenting the absence of a strong political union in the face of the present economic crisis. Against the background of this political vacuum, the crisis has revealed the deep national divisions about the state’s role in governing the economy including the usefulness of public spending as a stimulus package.

The result has been discord rather than coordination and this has further fueled the crisis. Institutionally the European Union remains stuck in-between the visions of more and less Europe and follows de facto a model of variable geometry. This, however, is likely to increase “the opportunities and incentives for free-riding and beggar-thy-neighbor policies.”

• What is the role of religion in all this? Is secularization progressing? Or are we facing a resurgence of religious feeling and hence desecularization? According to Adrian Pabst, neither theory is helpful at this point given the growing diversity of religious movements and the evolution of the main religions.

A key development in this connection is the degree of support (or not) provided to modernization. In some ways what can be observed is the gradual convergence of secular and religious ideologies and this explains why “religions are indispensable in upholding secular values of freedom and happiness.”

• The last two chapters of the book by Ravi Sundaram and Vadim Volkov respectively take a closer exploratory look at two more specialized subjects, namely, media piracy and the offshore sector. Media piracy is “indicative of the growing vulnerabilities of corporations and states in their ability to control information” and also the direct result of inequity.

At the other extreme, the perseverance of the offshore sector is a stark reminder that the secrecy regimes of neo-liberal capitalist states have “withstood the attack” of the 2008 financial crisis.

The Deepening Crisis is an ambitious book but it falls short on delivery. Its diagnostic techniques are more normative than empirical, the diagnoses are known neo-Marxist and center-left critiques of capitalism, and the prescriptions are weak in that they focus primarily on needed changes in policy paradigms. “You are right but it is different” is the feeling one is left with after finishing the book.

Paying more attention to middle-range theories as advocated by Robert K. Merton (1910–2003) rather than grand narratives might have produced more useful results with respect to governance issues.