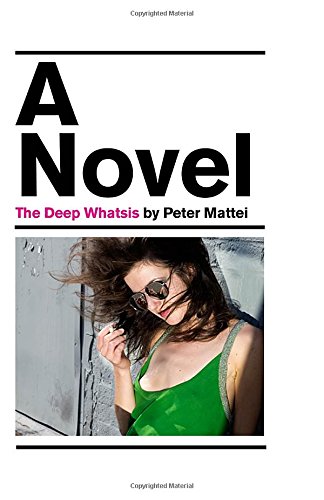 “. . . a fresh look at a favorite source of universal derision.”

Sharp and insightful, The Deep Whatsis is a vivid portrait of a young man’s loosening grip on his humanity in the midst of the random cruelty of big business downsizing.

This is the first novel from Peter Mattei, an award-winning playwright, filmmaker and writer for television and film. His vision of big-city corporate life stuns with accuracy.

Eric Nye is a confused man-child trapped inside an obnoxious, self-important hipster in charge of downsizing at a New York City advertising agency. He’s just managing to hold up the façade of the urbane corporate manager when his game is trumped by an attractive young intern. Her deadpan pick-up line is brilliant in its banality:
“Yes, yes I do know you, . . . You got the tuna.”

Knowing the intern is off limits in his corporate environment, Eric tries to avoid her after their initial encounter. When she keeps popping up at random events, he begins to wonder who is pursuing whom. Somehow she gets under his skin, and the mystery of what their connection means to him becomes irresistible.

Written in first person, present tense, Eric has a melancholy, affected voice. He’s screwed up, and it’s not only from the daily drudgery of firing people. Numbed by the debauchery novelists would have us believe is endemic to the marketing industry, Eric seems to feel little. Yet he revels in the opulent trappings of his success, identifying furniture pieces in his apartment and office by their designer names.

At the same time, Eric is acutely aware of the ridiculousness of his crowd, describing them as “the same age, the same race, the same wardrobe, the same facial hair, the same taste in music, socioeconomic background, college experience, shoes, political beliefs, and hair; but I suppose what really unites them is the shared fantasy that they are rebels, subversively unique individuals creating their own style for themselves.”

Mr. Mattei uses Eric to poke fun at the runaway pretension rampant in New York, from toxic consumerism to yoga. Little escapes the author’s scathing indictment, which is artfully balanced with moments of humor. There’s a hilarious scene in a pseudo-psychiatrist’s office where Eric is sent by corporate management in response to the intern’s potential battery claim after a night out with him.

Bored by the bright lights of city life, Eric’s got substance abuse problems and he’s lost track of who he is anymore. Just when we begin to wonder if we’ve met this character before, the author reveals there’s more to Eric than Jay McInerney’s famously unnamed character.

When Eric loses his own job, he’s forced to confront some long-buried truths. Hope materializes with an opportunity for redemption as Eric learns the truth about the intern’s game and embarks on a new path.

While not breaking new ground, Mr. Mattei’s debut novel takes a fresh look at a favorite source of universal derision.