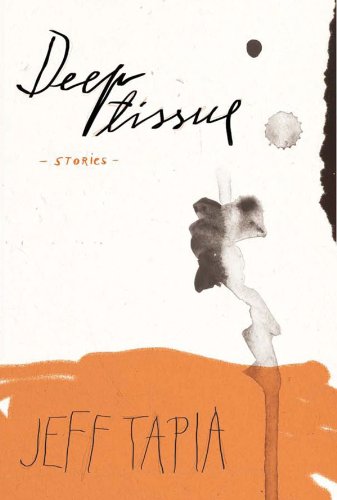 “Jeff Tapia challenges short story norms and dares the reader to walk away. . . . for that narrow niche of readers craving challenging fiction and dark humor, this is a very satisfying little book. . . .“

Author Tapia’s stories are set in unnamed American suburbs and exurbs the Midwest or South. Most build around an intra-family crisis; the protagonist is usually middle aged and unsatisfied with life.

For example, Mr. Tapia shows us a middle-aged security guard with a restraining order against him for stalking a married woman; we meet a once-successful dentist now working at a supermarket.

Other times, Mr. Tapia builds stories around families tearing away at each other. A drunk husband digs a hole in his yard until his estranged wife calls the police on him; a son is more concerned with his adult-onset acne and malfunctioning garbage disposal than his father’s funeral; a man drives his friend to the hospital after the friend loses three fingers in a chainsaw accident; a father attempting to bond with his teen son gets himself drunk and crashes into his son’s car.

Mr. Tapia is at his best when taking subtle digs at American male culture and crass materialism: professional sports, muscle cars, frozen foods, strip malls, are just some of the topics lined up for roasting. Men boast of eating Haberno peanuts and spray weed poisons named Prevail. Obese women spend the day making funetti cakes and other high sugar goodies without knowing who will eat them.

Mr. Tapia offers droll, dark humor for readers who can get past his pessimism. The following is typical: An exterminator, Chad, and his customer, Terry, stand in a driveway making conversation after spraying poison. “Terry asks Chad if he has any children, and Chad says probably.”

Mr. Tapia’s writing style is not for everyone. His sentences are short, almost juvenile in their simplicity. He does not use paragraphs or breaks of any other kind. The stories just start, go on, and then finish. Many stories seem to begin in the middle and only rarely do the stories have a true climax. Two of the stories are over twenty pages, some as short as four or five. Jeff Tapia challenges short story norms and dares the reader to walk away. Some will.

With Deep Tissue, Mr. Tapia follows his Livingston Press stablemates Terry Bazes (Lizard World) and Angus Woodward (Americanization) down a familiar corridor. Like his contemporaries Bazes and Woodward, Mr. Tapia is deliberately off kilter in his style and fundamentally pessimistic in his portrayal of contemporary America. Like them, Mr. Tapia is sophisticated, witty, and perceptive. As with other Livingston Press books, Deep Tissue will never crack the bestsellers list. But for that narrow niche of readers craving challenging fiction and dark humor, this is a very satisfying little book.