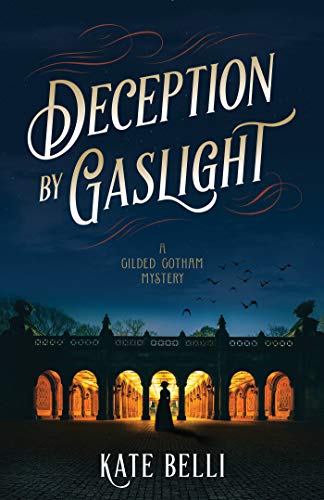 “a definite adventure in a Gilded Age, full of scandals of the elite and crimes of the nondescript, where some readers may find a jaundiced correlation to today’s world.”

Genevieve Steward may be a member of Mrs. Astor’s 400 but her family is nonconformist enough not to protest when she becomes a reporter for the New York newspaper, the Globe. It keeps her mind off the fact that she was jilted by her fiancé, who disapproved of her family, as well as showing she doesn’t need a man to give her a fulfilling life.

A thief calling himself “Robin Hood” is stealing from the best families and declaring his intention—through Letters to the Editor—of selling the stolen jewelry to benefit the city’s poorer ones—a good way to bring the plight of the poor to public attention, at the expense of the landlords who are members of its richer families.

Genevieve is determined to discover “Robin Hood’s” identity and prove to her boss she can write more than descriptions of flower shows and wedding parties.

In her investigations, she finds herself in a darkened alley face-to-face with a street tough named Danny, along with another set of New York City less reputable denizens.

“Daniel stared at her. She wasn’t scared. The woman had barely escaped two of the most notorious criminals in the Bend. Most women he knew would have fainted by now.”

Imagine her surprise when she attends a ball and sees Danny there. He’s none other than Daniel McCaffrey, mystery man nonpareil.

No one knows much about him except that he’s a lawyer, educated in England by philanthropist Jacob Van Joost. His origins and the reason he became Jacob’s heir are entangled in so much rumor and speculation no one would know the truth if it were directly before him.

Genevieve is determined to found out, however, about Daniel McCaffrey and his connection to Robin Hood, either with or without Daniel’s help.

Neither knows they’re about to embark on an investigative journey that will end in murders of several 400 members, involvement of others in a political scandal, the revealing of Robin Hood, and a threat to both their lives.

It’s always fun to read a novel in which  a certain period of history, abounding with recognizable names, is portrayed. The Gilded Age in which Daniel and Genevieve live is just such a time. It’s also interesting to see the ways in which Genevieve dodges the strict roles society has placed on females.

Though Daniel is the mystery man, leading two lives by clinging to his former one as well as living in Genevieve’s , he is, in his own way as iconoclastic as she.

“He’d never revealed much about his path to anyone, with the exception of Rupert, and he’d told him only after they’d both gotten rip-roaring drunk one night at college. Unburdening one of the darkest moments from his past had eased him mind enough to allow him to continue on the path Jacob had set for him but to simultaneously make that path his own.”

It’s only reasonable that the two should eventually meet and discover how much alike, as well as different, they are.

When they part after that first dramatic meeting, they can’t stop thinking about each other, not knowing their second meeting will be as dramatic, if only to them.

They are drawn together by a common cause while at the same time each wants to show independence and not rely on the other, though in the end, each learns that giving in to that alliance doesn’t make it a weakness but more of leaning on a partner.

Ironically, it’s Daniel who is more concerned with the ways society views them than Genevieve during those times they are together.

Deception by Gaslight is a definite adventure in a Gilded Age, full of scandals of the elite and crimes of the nondescript, where some readers may find a jaundiced correlation to today’s world. The history of the New York gangs is also blended well into the story.

A complicated mystery, and an equally unusual romance, the last chapter leaves the reader hanging by ending so abruptly. There has to be a sequel waiting in the wings to explain what happened on the lower deck of the ocean liner—and we will definitely be waiting to learn it.

The subplot of Daniel’s best friend Rupert, an impoverished English baronet who marries an American heiress strictly for her fortune, (and a delightful rogue) is also a spot-on occurrence for this time period. The author hints that the unfortunate Esmie may have qualities stifled by her overbearing mother. It’s hoped that the two appear in future novels where Rupert has the good sense to cultivate his bride’s qualities.