The Decent Proposal: A Novel 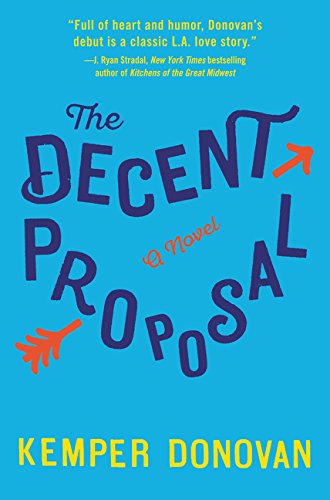 A mysterious benefactor offers $500,000 to Elizabeth and Richard, two complete strangers, if they will spend two hours together every week for a year. The premise requires suspending an enormous amount of disbelief. With a claim to being a romantic comedy, Richard and Elizabeth are opposites in adjectives as is to be expected for a rom-com, and it is unfortunate that the characters turn out so trite. The Decent Proposal is set in contemporary L.A.

It’s nice to see Elizabeth is a woman of color (she is Elizabeth Santiago), but she is a weak character even though the author claims she’s serious and ambitious. Elizabeth is on track to make partner at the law firm, and yet the plot revolves around her “need” for a man to make her realize what she’s missing in life, that she’s been living too tightly wound and concerned with numbers and money. Richard, a playboy and stereotypically handsome, of course comes to see Elizabeth as beautiful despite not being the beautiful white L.A. type, and readers are meant to applaud him.

There is an entire scene dedicated to Richard’s apology for vomiting on Elizabeth’s skirt that degenerates into an obsession over the gift-skirt’s size, the sizing of women’s clothing, and the myth of Marilyn Monroe’s proportions. This scene will irritate feminist readers sick of the harping on the industry fluctuation, focus, and fascination with women’s sizes, and it is equally annoying that Richard walks on eggshells, like every stereotyped man around a woman who doesn’t fit a model standard, when discussing a woman’s waist. Is the author trying to say that a larger woman is sexy? If so, the scene comes across as patronizing. It would have been better off leaving out the dress size, because now the author has deliberately stated what he considers “larger” (and that is size 10, ladies).

The book has little to recommend for it save the believable dialogue. There are plenty of stereotypes about L.A. living—partying, workaholics trying to get ahead, drug addiction and alcoholism, the wealthy, would-be film stars and film producers, etc.—and one dimensional characters. The mystery of why Richard and Elizabeth are selected by the mysterious benefactor is hardly enough impetus to keep a reader going. Curiously, Elizabeth never bothers to investigate the benefactor, which would have been keeping in character for her.

Of course the two strangers eventually fall in love, overcoming their differences, and with plenty of misunderstandings along the way. There are other characters to add to the cast, friends and side plots that are twisted in, to try to give depth.

While readers who like no loose ends will probably appreciate the neatly tied-up ending Donovan provides, most readers will feel the ending was hastily done to avoid further explication. This is the type of book best saved for plane rides: a book readers can flip through easily and quickly read or leave behind in their seat pocket and without feeling guilty.