Debtors' Prison: The Politics of Austerity Versus Possibility 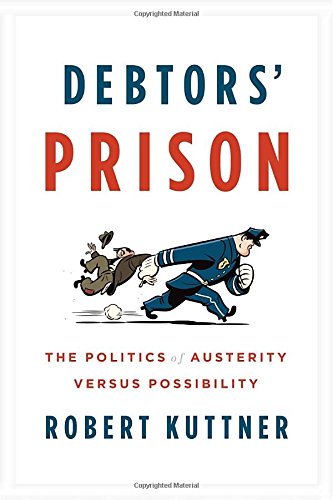 “. . . an intellectual tapestry that is both a page-turner and an education.”

Austerity does not work. That is the simple premise of Robert Kuttner's engaging new book, Debtors' Prison: The Politics of Austerity Versus Possibility.

Mr. Kuttner, a liberal economist and cofounder of The American Prospect magazine, takes this simple premise and expands it. He goes on to explain the double standard between indebted individuals and duplicitous creditors. Profligate banks receive enormous bailouts from the government, while the individual homeowner receives punitive measures including foreclosure.

Young people with student loans get no assistance, while creditors shame the indebted, calling into question the individual's personal morality.

All this is done while buying influence and writing the rules in the credit and debt game.

But Mr. Kuttner does more than offer another garden variety liberal progressive shaming of the powers that be. He weaves together history, economics, and investigative reporting into an intellectual tapestry that is both a page-turner and an education. Granted, a page-turner to those curious about the pathology of who and what created the circumstances that led to the global economic crash and the Great Recession.

(The Great Recession being one of the decade's best misnomers. Mr. Kuttner calls it the Lesser Depression, since the events were not as bad as the Great Depression, but remain too extreme and too protracted to call it a recession. Recessions are normally measured in business quarters, not years. Calling what the world is experiences a recession is like saying New Orleans had it rough during Thunderstorm Katrina.)

In economic terms, Mr. Kuttner is a traditional Keynesian. He follows the economic philosophy of John Maynard Keynes, an advocate of deficit spending and critic of the Versailles Treaty.

Debtors' Prison is arranged in three parts. The first part traces the origins of the economic crash from an American perspective, differentiating this present debacle from the Great Depression and the dot.com crash of the early 2000s.

The second part follows the history from the perspective of Europe.

The third part explores the meaning of personal debt, investigating how it became hand-cuffed to the idea of immorality. He weaves this into a conclusion where the reader sees the hard lessons of the Third World at the mercy of punitive IMF policies.

Why does austerity not work? One has to qualify this assertion. Mr. Kuttner explains that the world is experiencing a deflationary depression. Jobs are scarce, and when jobs are scarce, fewer people are working. This means less money is flowing into the economy, both in terms of consumer goods purchased (house, car, iPod, etc.) and into government programs because the tax base is atrophying.

Not ironically, the deficit hawks in favor of austerity programs are against government programs from an ideological perspective. Welfare creates dependency, government regulation stifles job growth and innovation, and so forth. The libertarian song and dance.

The biggest fear the libertarian/conservative position has is that of inflation and hyperinflation, the hyperinflation of Weimar Germany being an example usually trotted out. Except that the Great Recession/Lesser Depression is the opposite of inflation. Instituting austerity programs, as Mr. Kuttner illustrates with examples both foreign and domestic, kill jobs, stifle growth, and foster political extremism.

In the book, Mr. Kuttner shows how austerity programs were instituted in Great Britain, Spain, and Greece. Greece was in the worse shape, and the European Union, now united under a single currency, had to deal with a politically corrupt and economically backward nation. Austerity programs made Greece's bad situation worse, threatening political stability and crippling the economy. The problem with the EU was it lacked a strong executive branch to enforce action, unlike the United States and the Federal Reserve.

On the home front, Mr. Kuttner shows how President Franklin Delano Roosevelt's New Deal, inspired by the economic philosophy of Keynes, led to three decades of steady growth. Growth occurred at a moderate 3% per year, as opposed to bubble economies that have growth of 8% or more.

Mr. Kuttner consistently divides the economy into two spheres: the real economy and the speculative economy. As Gordon Gekko said in Wall Street, “I create nothing. I own.”

Unregulated spending ends up with money being shuffled around, but nothing is created. Wall Street gurus create derivatives of increasing complexity that do nothing for the real economy. Until the unraveling of the Bretton Woods agreement, the United States experienced steady growth, creating countless technological innovations and a society in which upward mobility wasn't a myth.

Mr. Kuttner's book is a triumph of economic and historical writing. He not only demolishes the arguments of the deficit hawks but also offers cogent solutions to the present crisis.