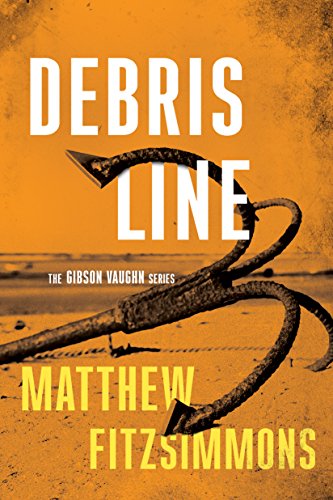 “Fans of the series and new readers alike will enjoy this standout thriller that combines nonstop action and suspense with memorable characters who make you want to linger even as you race to the finish.”

Debris Line, the fourth book in Matthew FitzSimmons’ series of thrillers featuring hacker Gibson Vaughn, takes Gibson on another edge-of-your-seat adventure in an exotic new locale. Gibson, the loner hacker with a conscience who was introduced in the fantastic series debut, The Short Drop, is now a reluctant team player recovering from his latest escapade with his cohorts—ex-CIA agent Jenn Charles, ex-LA cop Dan Hendricks, and their boss George Abe. In this latest smart thriller FitzSimmons wrings plenty of excitement, pathos, and moral complexity out of his intriguing cast.

When the novel opens they’re lying low in the Algarve region of Portugal under the protection of Baltasar Alves, a Portuguese crime boss who owes them a favor. The sunny beach resort town where the “crush of tourists had made hiding in plain sight that much easier” seems like the perfect place for Gibson and his pals to recuperate as they hide from the FBI. But as Jenn succumbs to the charms of a handsome athlete, and Gibson struggles to regain his stamina after being held in solitary confinement for months, he worries they’re losing their edge and won’t be prepared if there’s trouble in paradise. And, of course, there is.

Their vacation comes to an abrupt end when Alves insists they help him recover a drug shipment that’s been hijacked. If they don’t, Alves will lose his power over the region, and Gibson and his friends will lose their protector. Gibson is concerned this could lead to selling hard drugs for this notorious crime boss—a choice he can’t live with. But when he discovers that this is not your typical hijacking and may be an entirely new form of ransomware, the hacker in him is hooked. He has to find out what is really going on.

Soon he is confronted with an even more difficult choice that switches the story into high gear. There are car chases, escalating tech hijinks, drones delivering secret messages, a rising body count, and a literal ticking time-bomb that could destroy them all. FitzSimmons has a particular talent for writing about technology in a way that is both intriguing and easy to understand.

As Gibson uses his tech savvy to unravel escalating threats, we get just enough information to follow the action without getting bogged down. There are some exciting high-tech twists here, and the only thing you can be sure of as this fast-paced thriller unfolds is that just when you think things are resolved, they’re not.

But a good thriller needs more than fast-paced twists and turns; it also needs people you care about, and FitzSimmons serves up a memorable cast of characters in Debris Line, starting with Gibson Vaughn. Amid the propulsive action, there are much needed quiet moments for him to catch his breath and reflect. Lines like “The streets were all but deserted at this hour. Like the pale peaceful face of an old drunk sleeping off a night of poor choices” beautifully capture his perspective on the strange new world he finds himself in.

As Gibson prepares for an early jog we get another poetic window into his precarious state of mind:

“When the street cleaners emerged to sweep up the broken glass and wash away the blood and the vomit and the urine. A dull reset before the good times rolled again.

The morning before the morning. Alone with his thoughts.”

Alves and the scheming members of his crime family are also portrayed with depth and complexity. Fernando, Alves’ weak and spoiled son who seethes with resentment and craves his father’s approval, brings to mind Fredo in The Godfather. Alves, the aging patriarch, is not a good man, but garners our sympathy as he faces the one foe he can’t vanquish—his own mortality. It’s refreshing that the most capable and cold-blooded member of this crime family is a woman, Fernando’s cousin Luisa. She’s an interesting counterpoint to Jenn Charles, the sharp-shooter who is Gibson’s badass sidekick.

Like Luisa, Jenn excels at killing. But while Luisa is unpredictable and dangerous in all of her relationships, for Jenn killing is just a job that she keeps separate from the rest of her life. Passages like “When things got down to life or death, most people panicked. Jenn did something more akin to a brownout—all the nonessential parts of her brain went dark” provide a fascinating glimpse into how Jenn can be both a formidable adversary and a woman with a heart.

Women who kill and female rage are being explored more in fiction now, and both of these complex characters transcend the trope of the invincible female warrior as they wrestle with relatable moral choices and feelings.

The major characters all face moral dilemmas in this novel. There are spectacular car chases, but the story is ultimately driven at breakneck speed by these characters as they make choices that test their integrity and send them careening from one unexpected twist to another.

The title, Debris Line, resonates throughout as the wreckage of these choices threatens to engulf Gibson and his cohorts. Fans of the series and new readers alike will enjoy this standout thriller that combines nonstop action and suspense with memorable characters who make you want to linger even as you race to the finish.