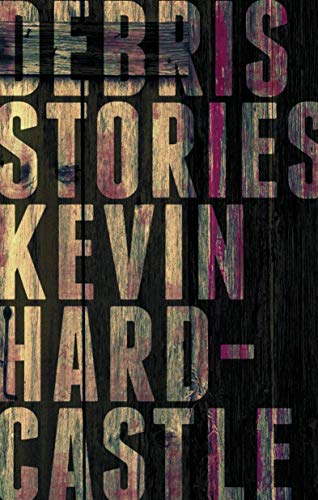 “Hardcastle is clearly a talent worth watching . . .”

A roughneck named O’Hara learns that his infirmed father was killed inside a nursing home. A man named DeCarlo, also a nursing home resident, has pushed down O’Hara’s father while in a stupor. O’Hara roughs up DeCarlo, but police prevent O’Hara from returning and killing the old man. So O’Hara heads for the house of DeCarlo’s son. This sad, poignant story “Spread Low on the Fields“ is typical of the nine stories in Kevin Hardcastle’s collection, Debris.

Other stories work the themes of violence and family grudge, performed by angry men with idle time and too much alcohol. Hardcastle’s protagonists include a brawler fighting for meager purses, an adult son caring for an alcoholic mother, a young man stuck in the family business of banditry, a murderer on his trek home, and a woman who reassembles a life for herself and a mentally ill husband.

Despite all the booze, violence, and testosterone, there is a feminist undercurrent to Hardcastle’s stories. For example, in “Montana Border” and “Most of the Houses Had Lost Their Lights,” women characters civilize errant males. Civilizing love interests of the protagonists in “Bandits” and “Shape of a Sitting Man” are pushed aside by ties back to dysfunctional families. In “Debris,” a woman shoots a murderer camped on her land while her infirm husband watches television.

Hardcastle casts a critical eye on family dynamics across these stories. Bonds between kin are powerful but rarely a positive influence. Parents suck down children who cannot break away from their alcoholism and violence. When not brawling with each other, brothers and fathers take revenge on outsiders who have hurt the family.

Harcastle’s stories are set in unnamed parts of rural Canada—sparsely populated places speckled with run-down marinas, rusting trailers, and pick-up trucks on the edge of exhaustion. Morose and pervasive alcoholism is endemic to the human condition. Undermanned and non-confrontational police arrive too late to stem the violence.

There is much to like in Hardcastle‘s stories. He writes with a folksy intelligence reminiscent of John Steinbeck, eg Hardcastle describes the labored walk of an aging woman protagonist this way: “Her knees were singing to her about the humidity.” But Hardcastle’s plots and people are notably more pessimistic.

Perhaps Hardcastle’s short stories have more in common with those of Alan Heathcock and Josie Sigler, who also recently published intelligent, gothic short story collections (respectively Volt: Stories and The Galaxie and Other Rides) are also set in rural northern climes. But Healthcock and Sigler worked harder to balance light and dark. The sameness to the stories in Debris makes this collection slightly less successful.

In total, Debris proves that Kevin Harcastle is very a good writer interested in telling very similar stories. Hardcastle is clearly a talent worth watching as he broadens his focus in the future.