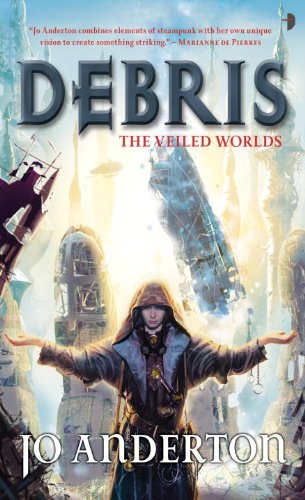 “Debris immerses you in a world both strange and enchanting, filled with sites, sounds and events that will keep you turning the page.”

The world is not what it seems to be to the normal eye.

There are pions and debris . . . invisible, partially alive material that only some can see.

This is the basis of the world that Jo Anderton built for her debut novel, Debris, the first book in the Veiled Worlds series.

Tanyana is a highly skilled quantum architect, someone who can not only see pions, the particles that hold all matter together, but command them, as well. She uses this mixture of skill and in-born talent to build great and beautiful structures for the veche, the ruling class of her city of Movac-Under-Keeper.

As the novel opens, Tanyana is building a highly ambitious statue for the veche, called Grandeur. It is a symbol of what the veche have accomplished. On this morning, there is a surprise—and eventually suspicious—inspection. The inspector is not the type who would normally come to inspect. And he is cryptic in his answers to her questions.

But Tanyana and her team of pion builders continue the work of constructing Granduer as they had intended. And then things go terribly wrong.

Angry red pions attack Tanyana, destroying the statue she has been creating and almost killing her in the process. These are not the white pions she has always worked with, who seemed to delight in following her commands. Worse, Tanyana seems to be the only one who can see the red pions. The event is determined to be an accident and she is the one responsible.

After this accident, Tanyana awakes to find she can no longer see pions. She can now see debris, however. To pay back the money the veche lost due to the “accident,” Tanyana is made a debris collector—those on the lowest rung of society. She is fitted with a special debris-collecting suit that is literally infused into her body.

Now the question is: Who did this to her and why?

Ms. Anderton creates a rich and intriguing world with Debris. Movac could be Chicago if it weren’t for the Steampunk-like transportation powered by pions. The team of debris collectors Tanyana is assigned to are at once analogous to garbage collectors and firemen, being both low-cast collectors of debris (the waste product of pions) and rescue workers whenever there is a debris-related disaster. There are secret societies and even a history that has been buried and suppressed.

The cast of characters is three dimensional and sympathetic. Tanyana is relatable, facing some of the same challenges that many are facing in these “interesting” economic times. With her new debris collector salary, she can no longer afford the apartment she rents in the nice part of town. She faces prejudice she never experienced before now that she is a lowly debris collector. Her world is turned inside out and upside down.

Surrounding Tanyana on this journey is a diverse group of supporting characters. There is the technician, Devich, who created her debris-collecting suit, who quickly becomes her lover and introduces her to parts of the high veche society she had never been privy to before. There is the cantankerous leader of her debris collecting crew, Kichlan, and his “special” brother, Lad, who can find debris like no one else.

Add to this the mystery of the red pions and Tanyana’s unusual ability to quickly adapt to the debris-collector suit. Then there is the strange voice she can hear that seems to come from the debris and is, also, the voice that talks to Lad, helping him find debris. And, ever since the accident, these strange “puppet” men have been following and watching her.

The world of Debris is both new and familiar, weaving science and magic, politics and caste, as well as a unique mythology that is believably real. There are true friends and fair-weather friends, betrayal of trust and unexpected supporters. Also, the novel closes up satisfactorily while still leaving you waiting for the next installment. Debris immerses you in a world both strange and enchanting, filled with sites, sounds and events that will keep you turning the page.