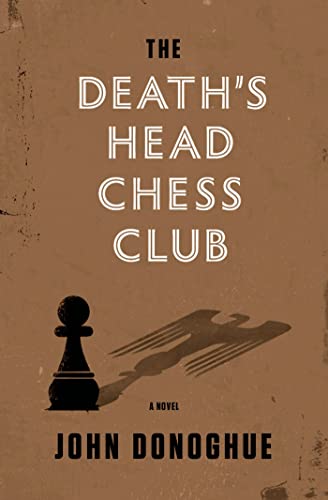 “For a neophyte novelist, this story is superb.”

The Death’s Head Chess Club is the fictional account of a Nazi SS officer (Paul Meissner) and a French Jewish prisoner (Emil Clément) whose lives become intertwined in Auschwitz and later.

In Auschwitz, Clément earns the nickname “The Watchmaker” because he had a watch repair shop in Paris before the war. He is also a very talented chess player. His entire family is deported to Auschwitz, where Emil’s mother and his children are sent to the gas chamber upon arrival. He is forced to work in a munitions factory in Auschwitz III (Monowitz) for years. He doesn’t know where his wife is or even if she is alive. Each day, he and other prisoners slide closer to death as they are forced to endure indignity and brutality.

Meissner sponsors a chess tournament among the SS at Auschwitz to improve morale. The initial success is undeniable. But Meissner eventually becomes aware of a Jewish prisoner known as The Watchmaker who some call “unbeatable.” Many in the SS desire a match between one of their own and a Jew, to prove that the Jewish mind is inferior to the Aryan mind.

Clément prefers not to play chess for the personal edification of the SS; however, they eventually guarantee that a prisoner’s life will be spared from the gas chamber each time that Clément wins. Before each match, Clément uses an ancient Jewish Kabbalah method to prepare mentally. He proceeds to win every match against SS competition. Clément’s reputation flourishes at Auschwitz, while each victory increasingly infuriates the SS.

The book alternates back and forth in time, from 1944 Auschwitz to 1962 Amsterdam, where Clément is participating in an international chess tournament. Here, Clément runs into Meissner, who has terminal cancer.

After serving prison time for his behavior as a Nazi SS captain during the war, Meissner repents, becomes a Catholic bishop and devotes many years to serving poor Africans. Yet Meissner carries his SS culpability endlessly. He must find a way to make amends to Clément before he dies.

In Amsterdam, Clément is also forced to play chess against a former Nazi propaganda officer named Willi (Wilhelm Schweninger). Emil had defeated Willi at Auschwitz before the war ended and he does so again early in the 1962 Amsterdam tournament.

Clément is initially repulsed by the sight of his former Nazi tormentors. But Meissner gradually forces the three men together. Malice becomes assuaged as the three men begin to understand each other and the dreadful guilt that they all carry. In Amsterdam, a powerful bond forms among the three that is as strange as it is rewarding.

Once more, Clément defeats every opponent. Is he still unbeatable?

The thought that a former Nazi SS officer could develop a close friendship with a Jewish survivor who lost everyone he loved at Auschwitz generates an extraordinary and multifaceted plot. All three protagonists are overwhelmed with guilt. Willi and Meissner feel guilt for their failed morality as Nazis. Emil feels guilty for surviving when his loved ones and friends died. As remorse overpowers each character, eroding their souls, this is the story of how they find redemption.

Donoghue adroitly displays the intricate hierarchy of life at Auschwitz, where Nazis ruled over and murdered more than a million innocent people. Here, time no longer has meaning and the rules of society are abandoned in favor of pernicious evil. In this environment, each prisoner understands that his or her life could end upon the whim of a German guard, officer, or kapo. Donoghue describes the daily terror of slavery, starvation, sickness, and squalid conditions through the eyes of protagonists.

Chapters are named after winning chess moves from famous matches; however, the novel fails to describe how each chapter title plays out in the story. The publisher might also wish to consider adding some visuals. Maps, diagrams and pictures of some of the real SS officers would add to the quality of this fine book. It is well written and edited, with a swift, pulsating flow toward an inevitable, shattering conclusion.

John Donoghue weaves a nonlinear masterpiece, carrying the reader back and forth from Auschwitz to the 1962 Amsterdam chess tournament. He proffers a terrifying moral landscape in which Jews are subjected to unimaginable atrocities. Yet the friendship that develops between the SS officer and the Jewish chess champion speaks to the power of forgiveness, tolerance, and compassion. Each chapter builds upon the tension created in prior chapters. For a neophyte novelist, this story is superb.