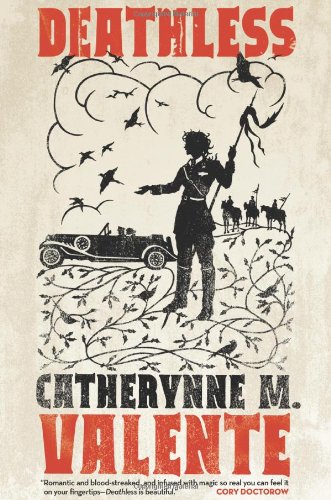 He is the opposite of death: devilish, dark, and dashing. He is as ancient as the heavens, but as young as you want him to be. He is the Tsar of Life, and he’s looking for a bride. He is Koschei the Deathless, and he’s coming for Marya.

Marya Morevna’s sisters have already run off with men-creatures of the supernatural world. She lives in a house governed by goblin-like beings, and has always felt in tune with things beyond the human realm. So when the immortal Koschei takes her as his bride, she doesn’t question her path.

Enter Deathless by Catherynne M. Valente, a modern retelling of the Slavic folktale, “Koschei the Deathless.” Bewitching and darkly sensuous, Deathless is a new breed of fairytale for the eclectic reader.

The characters of Deathless are interesting creatures. In many cases, they’re not so much people, as they are personifications of highly complicated, but abstract, concepts. That’s not to say they aren’t enjoyable—in fact, Valente’s characterization of Koschei and Marya are some of the most vivid, tangible people to appear in recent literature—but they’re different; more than humans, but less than monsters.

Readers familiar with Slavic folk traditions, or the original tale of Koschei the Deathless, will recognize such memorable characters as Baba Yaga, Ivan, the domovoi, and of course, Koschei and Marya themselves; however, these characters have been modernized and fleshed-out in the fullest sense.

The plot itself is a bit difficult to follow for the first hundred pages or so. It gets lost behind the mountain of prose scattered across the pages. Depending on your point of view, either the reader accommodates himself to the prose after this point, or the story becomes the more prominent feature. Either way, once it gets rolling, Deathless becomes a story that’s difficult to let go.

Ms. Valente’s prose itself is both unique and highly stylized. Though at times she does bury her story under the weight of her words, the words themselves are beautiful. Not exactly lyrical, and not exactly literal, the writing in Deathless is a wonderful combination of a Russian folk tale, originality, and having a dictionary crammed into one’s brain. It is, for lack of a better word, mind-boggling.

Deathless is the fairytale for a new generation of readers. Dazzlingly exotic, and expertly restrained, you may find want to read it twice: once to understand the depths of the story Ms. Valente has presented, and once to revel in the power of her words. Although Deathless will primarily appeal to an eclectic audience, it’s one of the best books of its kind, and is sure to intrigue, if not captivate, everyone who gives it a chance.