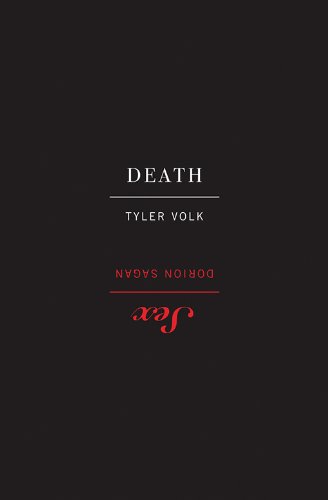 Death and sex are literature’s subjects, not science’s. What we care most about is what these subjects mean to us—not what they, in fact, are. When scientists attempt to enlighten us on these matters, they often fall to recounting certain metabolic processes, generally missing the point, while we readers sigh or snicker, wondering if the researcher has any experience out of the lab. This is not the case with Death and Sex.

Tyler Volk and Dorion Sagan, writers of exceptional style, humor, and sensitivity, successfully connect the personal meanings of sex and death with would-be mundane details, for instance, with oxytocin and carbon recycling. In each chapter, they begin with literature, religion, personal experience, or psychology, turning to data, statistics, and molecular interactions only to enlighten and never to disenchant. The result is a gracefully balanced scientific narrative about two of the most intriguing, frightening, funny, and popular topics in human discourse.

The single volume is actually made up of two separate books. Tyler Volk is the author of Death. Turn the book upside down and over and Dorion Sagan is the author of Sex. The book comes sans cover, with black, cloth binding and gorgeous red/silver embossed lettering. Death and Sex won the 2009 New York Book Show Award for best nonfiction cover.

Volk is a professor of biology at New York University who studies life and death in the Gaian ecosystem. He is the author of four books and is affiliated with space life-support research at NASA. Sagan has written and co-authored 23 books on evolution, thermodynamics, and sex, translated into 11 languages, and is the son of astronomer Carl Sagan and biologist Lynn Margulis. Each author mentions the other’s project once or twice, but the books remain independent of each other. The authors did, however, confer beforehand on the aim of their project, deciding to treat death and sex in the “cosmic” sense and not focus simply on human experience. The books come together in the end, jointly reversing some of our intuitions about the roles death and sex may play in evolutionary processes.

Volk begins his book telling us how he almost died from a many months-long, improbably unlucky, simultaneous exposure to CO2 from a faulty home heater and a faulty car exhaust. The gas wreaked havoc with his nervous system, and his doctors weren’t able to properly diagnose his illness. All the while, Volk was busily writing about the ecosystem’s CO2 levels without being aware of the dangerous levels in his own system. Marking this as the first time death became personally relevant, he wonders what it means to take death personally. Moving then through the ritual sorrow of a mentor’s funeral and reminding us of Epicurus’ dictum that our own deaths will be “nothing to us” since we won’t experience them, Volk decides he isn’t satisfied with such familiar sentimentalities. Expecting us neither to accept death’s sorrows nor to refuse to acknowledge them, Volk invites us to reconsider death as a mechanism of life.

Death, of course, is a maker of compost for the next generation, but less obviously, death can be a functioning part of life, not just a provider of fuel for it. Volk explains how dead cells are sometimes “manufactured” by living organisms that use their own corpses as building material. For instance, the inner core of a tree, which moves mineral-rich water from roots to leaves, is dead and would not function if it were not dead. The cells here are called tracheids, which at an early stage automatically empty their contents, dissolve their ends, and then connect into channels. Unlike the way it is for most cells in most organisms, death does not come for tracheids when they have out-lived their usefulness and must be gotten out of the way for newer cells to replace them. Instead, death lights the purpose of tracheid life.

Volk gives numerous other examples of death as part of growth and development. For example, in our own bodies, death is the sculptor that shapes our hands and feet. In the womb a developing fetus first grows fin-like hands and the digits are carved out by the death of web cells between the digits. Programmed cell death triggers many other metabolic processes responsible for cell differentiation, the mechanism of development and complexity. To wish to be free of programmed cell death would be to wish for cancer: undifferentiated, unrestrained, practically immortal cell growth.

Programmed cell death may seem counterintuitive. We are used to thinking of living beings “trying” to stay alive until at some point—injured, exhausted, beaten by outside forces—they finally begin to senesce. Volk wants us to contemplate the fact that death can also come from within, where it is not an effect of ill health but of perfect health. “With the advent of programmed cell death, death went beyond its position in evolution as a by-product and cog in the biochemical cycles.” Death has now become an adaptation.

Death, claims Volk, is not only physically creative, but can be morally inspiring, too. Volk cites studies which show that when the subject of death is put before us, we tend to become more willing to fight for whatever values we happen to hold. In this way, we attempt to make the world more “us” so that our values, if not ourselves, might live on. Since thinking of death makes us care more about the state of the world we leave behind, we should be reminded of our mortality often. It is a healthy part of our lives.

Dorion Sagan begins Sex equating immortality with eternal sameness. An amoeba that reproduces asexually by dividing into perfect copies of itself is immortal in some sense. But, as Sagan notes, eternally-the-same is not an existence that we should wish for. We are “glad that each of us is not an identical copy in a cookie-cutter mold off an evolutionary assembly line. . . . it’s the little things, from freckles to the shape of a lip . . . , or the uniqueness of his words or her thoughts, that mark the loved one as our loved one . . .” Through sexual reproduction we don’t reproduce—which is what asexual reproduction allows simple organisms to do—so much as reproduce imperfectly. It is these imperfections that not only cause us to cherish our mates, but also spice up the evolutionary process.

Sexual reproduction, writes Sagan, “ensures that each new being will carry a random hand of genetic cards assembled together from the separate deals of each parent.” Sexual reproduction makes natural selection less able to select precisely. But it would be a disadvantage if selection were too effective in choosing exactly what works well in one generation. Environments are continually changing. Thus, argue evolutionary theorists citing the “Red Queen” hypothesis, species need to keep moving just to maintain, and so we can say that natural selection “selected” for randomness when it discovered sexual reproduction.

How did natural selection do this? Sagan’s answer reflects his work with Lynn Margulis on symbiosis and evolutionary change. Sex, Sagan tells us, may hark back to the days, before the innovation of sexual reproduction, when cells were haploid. Reporting the 1940s findings of Lemuel Roscoe Cleveland, Sagan supports the idea that the first diploid cells may have resulted from the ingestion without digestion of one haploid cell of another. Sagan notes gametes are also haploid, almost as if they have reverted to the ancient condition for the purposes of replaying, in every conception and sexual coupling, that ancient cannibalism or “urge to merge.” With a style as literary as it is scientific, Sagan comes round to the topic of sexual perversion that has death, rather than life, as its object.

Sagan considers sexual reproduction part of a universal thermodynamic process, which, with increasing complexity, creates more and more gradient–reducing life. Viewed this way, reproduction tends to contribute more to consumption than production. If we take this thermodynamic perspective, we can say that life, the normal object of sex, is displaced by death. If so, then sexual perversions can’t be considered abnormal in a cosmic sense. Sagan gives examples of a number of perversities in nature and recounts the narratives of two of the biggest perverts in literary history, the Marquis de Sade and Georges Bataille, who dwell on sexual fetishes displacing the normal object of desire. If the Marquis is known for pursuing the “wrong” target, his perversion seems pretty mild compared to male bedbugs, which can inseminate males or impregnate females by piercing any part of their bodies.

Sagan notes that sociobiologists turning from religion to science in search of moral grounding may not find the help they are looking for. Our nearest relatives the chimpanzees have very different sexual orientations than some of our other nearish relatives the gorillas. The females in the former group are promiscuous and the males have evolved larger, more productive penises as a result of needing to perform better in the sperm race. Meanwhile, the females among the latter group are horded and forced to be monogamous, and symmetrically, the gorilla alpha male is relatively less copiously endowed than his cousin the little chimpanzee, and he has to fight off other males to maintain his sexual monopoly. The sexual behavior of human species, we already knew intuitively, is somewhere in between that of our various cousins. So, concludes Sagan, we cannot look to other primates living in more “natural” conditions to establish what is “normal” sexual behavior for humans.

On this issue of sex, Sagan advises, the audience might just as well consult rock lyrics, some of which understand the human condition quite well. The evolution of human sex has depended upon sex (promiscuity), drugs, (hormones) and rock ’n’ roll (aphrodisiacal rhythms). Even our own genes are much more promiscuous than we imagine. Technically, argues Sagan, sex is any genetic mixing. So when you are attacked by a virus that mixes with your genes, you’re having sex with another species. “Indeed,” he writes, “fully 8 percent of our genome appears to be remnants of infectious viruses . . . Our very humanity depends upon such ancient transgressions.” Our sexual history is replete with promiscuity, perversion, and displacement. Sex, in Sagan’s understanding of evolutionary processes, seems intent upon cuckolding Darwin’s great idea, for what natural selection chooses—or seems to “father”—is not necessarily what is reproduced.

Some readers will want to compare Death and Sex to Sex and Death (1999) by Kim Sterelny and Paul E. Griffiths. In that comprehensive introduction to the philosophy of biology, the authors offer an understanding of the irreducible complexity of evolutionary processes that is much deeper than the explanations offered by many staunch neo-Darwinians. While sympathetic to Sterelny and Griffiths’ views, Volk and Sagan do have a different emphasis. For Sterelny and Griffiths, “sex” refers to “reproduction” and “death” refers to “selection.” We may say that Volk and Sagan wind up conveying almost a reversed sense of these terms, which is perhaps signaled by the reversal of the usual order of the paring in their title.

Volk turns the meaning of “death” on its head by stressing its creative function instead of its negative culling function in evolutionary processes. And in the end he names death as a force inciting moral responsibility. In his part of Death and Sex, Sagan warns against putting too much emphasis on the role of “sex” as faithful reproduction in natural selection, and he reminds us that morality is a cultural creation and our culture is based on physical constraints that are partly uniquely human and partly typical of all life. The world as seen through the lenses of death and sex is truly a complex affair. Volk and Sagan never fail to convey this, along with all the beauty and the strangeness that come with the human meanings, which emerge for us out of our own experiences of death and sex.

Tori Alexander is a novelist who lives in New York and writes on the philosophy of science as Victoria N. Alexander.